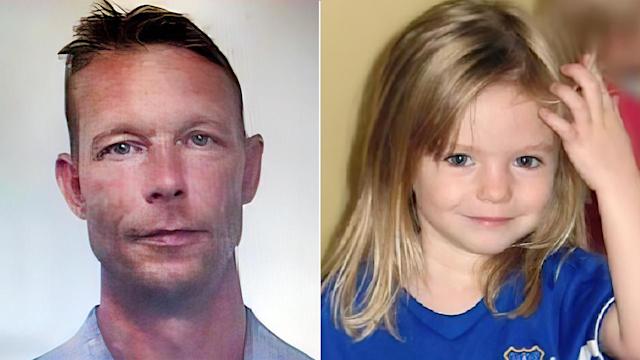 Portuguese prosecutors have named 45-year-old Christian Brueckner, a German man, as an official suspect in the disappearance case of Madeleine McCann.

It was first announced in 2020 that he was being investigated in connection with the believed abduction. Brueckner has been informed that he is now considered an ‘arguido’ - a Portuguese term meaning ‘formal suspect’.

Brueckner denies any association with the crime, or the case.

He has not yet been charged, although this status could be a preliminary step before an arrest or charges are made.

German police are said to have traced a mobile phone that they believe was being used by Brueckner on the same night McCann vanished; it was linked to a phone mast near where the family were staying. There are allegations that he potentially also made a confession to a friend that he had taken Madeleine.

The suspect is a previously convicted child abuser, having allegedly committed multiple offences of rape and child molestation. Most recently, Brueckner is said to have exposed himself to, and masturbated before a group of children in 2017.

Brueckner has also been convicted of charges relating to drugs.

He is currently serving a seven-year prison sentence in Oldenburg, Germany for the rape of a 72-year-old American woman in 2005. The assault took place in the same town - Praia da Luz, Portugal - where McCann vanished on May 3, 2007.

The case of McCann’s disappearance has been ongoing for almost 15 years.

The toddler, then three years old, went missing from her bed in a holiday apartment at a resort in Praia da Luz, in Portugal. Kate and Gerry McCann, a British couple from Leicestershire, lodged in the apartment while vacationing with their daughter Madeleine, as well as her two-year-old twin siblings. They had also travelled with a group of their family friends, and their children.

Madeleine and her siblings were sleeping in the apartment, 100 yards away from where their parents and family friends were dining, in a nearby restaurant within the complex.

When Kate McCann, the victim’s mother, returned to check on the children, she discovered that Madeleine was gone.

Since then, despite a long police investigation spanning more than a decade, Madeleine has never been found. It is believed by investigators that the girl was abducted from the apartment, hence her disappearance is still considered to be a missing persons inquiry.

Christian Brueckner is not the first official suspect named by the Portuguese authorities. The victim’s own parents, the McCanns, were declared as such in 2007. In the following year, they were formally cleared of suspicion.

There has been speculation that perhaps Brueckner has been declared a suspect due to Portuguese legislation which states that there is a 15-year statute of limitations for charges of murder. It is possible that authorities are looking to prolong the investigation. This theory has been supported by Hans Christian Wolters, a German prosecutor.

Jim Gamble, a child safety expert and the senior child protection officer in the UK’s initial investigation into the McCann case, has commented that the development “could mean everything or it could mean nothing”. Still, he says there is reason to remain hopeful.

German police are heading the investigation into Brueckner’s potential involvement. Investigators are currently focusing their forensic work on Brueckner’s Volkswagen camper van that he travelled in for several years before Madeleine went missing.

The suspect has not yet been formally interrogated by the authorities. Without a lawyer present, he has refused to answer any questions.

Madeleine’s parents have said that they welcome the news that this official suspect has been declared. They stated that this reflects progress in the tragic case.

The McCanns have reportedly never given up hope that their daughter is still alive, and that they may be reunited with her one day.