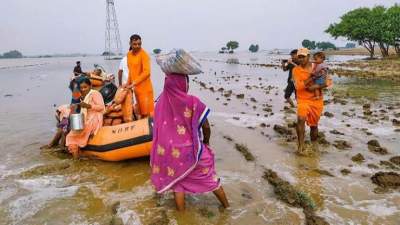 Madhya Pradesh has raised a red flood alert for districts in the north of Madhya Pradesh. Over thousands of people were rendered homeless as the flood situation in Shivpuri, Datia, Gwalior, and Sheopur worsened in these 4 districts of Madhya Pradesh. In the last few days, it is noticed that heavy rainfall hits most parts of Madhya Pradesh including Gwalior, Shivpuri, Sheopur, Guna, Bhind, Datia, and Morena. The districts of Shivpuri, Datia, Gwalior, and Sheopur were among the worst affected areas. And the city of Sheopur being the most affected. Hundreds of vehicles were seen damaged in the streets due to heavy floods. Also, the mobile towers, communication lines, and railway tracks are closed in the Sheopur district due to this natural disaster.

According to the reports, it is said that water from the seep river gets overflowed resulting in flooding the main market. The situation is very bad as there were no communication connectivity and channels were not functioning.

Chief Minister of Madhya Pradesh Shivraj Singh Chouhan said that the teams of SDRF, NDRF, and BSF have successfully evacuated about 5,950 people from 240 villages safely. He later said, presently three teams of NDRF are engaged in the rescue operation in Gwalior while two teams are in Shivpuri. Also, four columns of The Indian Army team are engaged in rescue operations in Shivpuri, Datia, Gwalior, and Sheopur.

Around 1,171 villages are affected by the floods and more than 34 thousand hectares of crop area have been damaged. The state is battling the heaviest rainfall at least 3 people lost their lives and over 2,500 villages in the Gwalior and Chambal were facing the drastic flood situation. The catastrophe has disrupted the crops, industrial areas, and property worth crores. There are reports of several bridges washed away in the Gwalior Chambal region.

The army and the air force had undertaken rescue operations in the Gwalior, Shivpuri, Sheopur, Guna, Bhind, Datia, and Morena district, where rainfall has flooded the villages. Over 100 boats have been deployed in rescue operations in 1,171 villages of the state. Also, information about the rescue operation is being given to secure people, arrange food, shelter, clothes, etc. stated by the Madhya Pradesh government.

CM Shivraj Singh Chouhan said Indian Air Force choppers have also started their rescue operations and many people have been rescued from this worst flood situation. He further added that the heavy rain has reduced now and I am sure that there will be no terrible situation of rainfall. We are constantly making efforts to provide relief to the people. The arrangements should be strengthened again to make the condition much better. According to the latest data, the northern region of Madhya Pradesh received unprecedented 800 mm rainfall between Monday and Tuesday which led to the floods. The flooding started after 470 mm of rainfall in Guna, 270 mm in Sheopur, and 180 mm in Vidisha on the night of Monday till Tuesday morning.

Around 1000 people have been safely rescued and an operation is still in the process to save the people who are stranded in the villages of Bheravada, Jatkheda, Jwalpur, and Mewada. Apart from the Indian army, the air force has now been put together and they are currently assisting with rescue efforts.”Many people are rescued by the boats according to the latest data coming in, more than 250 people were being evacuated from the district of Morena, and rescue operations are going on for 200 more people. CM Shivraj Singh Chouhan, who keeps a tab on the relief and rescue operations said that over 1155 people have been evacuated from 36 affected villages of Datia.

The Indian Meteorological Department had issued a ‘red alert’ for 10 districts of Madhya Pradesh which can be the target of the heavy rainfall. Gwalior, Guna, Shivpuri, Ashok Nagar, Sheopur, Bhind, Neemuch, Datia, Mandsaur, and Morena are the red alerted areas by the IMD.

“Talked to CM Shivraj Singh Chouhan regarding the flood caused by heavy rains in some parts of Madhya Pradesh. The state is being given full help for relief work from the centre. In this difficult time, the Modi government is standing with the people of the MP state,” Amit Shah tweeted. Both the leaders have assured their hands to help the state, and we are continuously monitoring the flood-affected areas, informed by CM Shivraj Singh Chouhan.

India is developing its anti-drone technology, which will be deployed to forces soon: Amit Shah