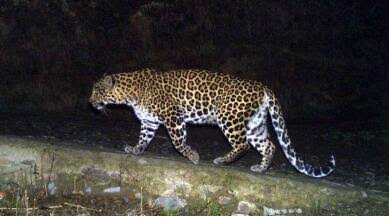 A leopard reportedly fell into an open well in the Jakhori village of Nashik on Tuesday night while seeking prey. The depth of the well prevented the Leopard from climbing it. A crew from the forest department arrived at the location after being notified by the villagers.

First, the forest crew dropped a cot into the well for the Leopard to rest. We then dropped a cage and retrieved the massive cat. Leopards wandering through populated areas have frequently fallen into open wells. The massive cats are returned to the wild after forest officials and residents rescue their lives through prompt intervention.

Recently, employees of the forest department in the Nashik region of Maharashtra were able to rescue a leopard trapped inside an open well.

Video footage published on Twitter depicts the large cat sitting in a cage while growling and pacing restlessly.

The tweet read, "Maharashtra: A leopard fell into an open well in Jakhori village, Nashik, and was saved by forest officers." Since its Wednesday upload, the video has received over 23,000 views on the social network.

While some Twitter users discussed human-animal conflict, others made light of it. For example, a user said, "Please do not invade their territory." Another individual commented, "Come on! What is the purpose of this hostile attitude? Ungrateful man."

In June, a similar scenario occurred when a video of a leopard rescued from an open well circulated on social media. Officer Susanta Nanda of the Indian Forest Service urged individuals on Twitter to cover exposed wells to avoid wild animals from falling in.

In the Sambalpur area of Odisha, a leopard was captured on camera mounting a ladder and fleeing into the forest after falling into a well.

However, according to one user, ninety percent of farmers in the state cannot afford to cover their wells. How can 90% of Maharashtra's farmers, whose income is insufficient to sustain themselves, afford the cost of covering open wells? The government must increase well-covering subsidies," the user wrote.