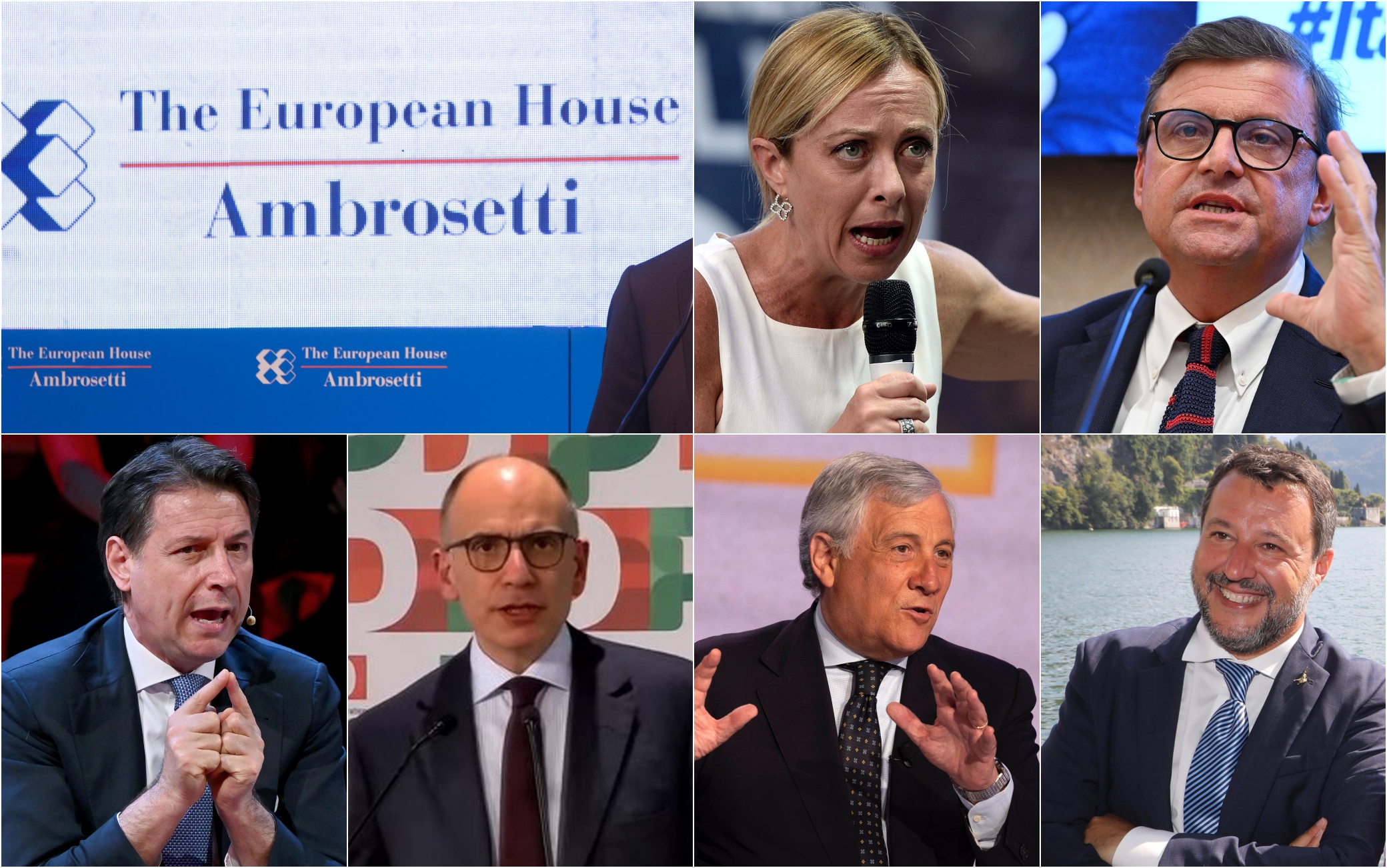 Sunday, 4 September 2022. Six political leaders represent the main Italian parties running for the next election at the 48th edition of the Forum Ambrosetti in Cernobbio (Como). The Forum Ambrosetti is a private event promoted by The European House and involves the participation of politicians, managers, economists, and entrepreneurs. This time the event addresses the present and future scenarios for Italian and European competitive strategies.

On this occasion, some of the leading figures of the Italian political scenario had the opportunity to offer a brief account of their political agenda. Since they did not find an agreement for a public debate on television, it seems that this will be the only occasion to see them all together before the election on 25 September. The journalist and director of Corriere della Sera, Luciano Fontana, acted as the event’s moderator. It is interesting to note how the present politicians tried to condense the themes they care about the most in a short time. Moreover, they also needed to adapt their political program and expressive form to the audience of professionals they were facing.

Both wings of the political spectrum were present at the event. As for the left, Carlo Calenda, Enrico Letta, and Giuseppe Conte represented the three main liberal forces. On the other hand, Giorgia Meloni, Matteo Salvini, and Antonio Tajani embodied the right-wing coalition.

Carlo Calenda, leader of the party Azione and former Minister of Economic Development, gave quite a technical talk about state-run, European funds, State’s use of money, and environmental, educational, and sanitary policies. “In Italy, there is no culture of management,” – he said – “the problem is not the lack of money, but the lack of ability to realize and implement.” Azione is now in league with Italia Viva for the election. The coalition has around 6% of support according to the most recent opinion polls.

Following Calenda, Giuseppe Conte, president of the Five Star Movement and Former Italian President, focused on the need to invest funds and energies in the European Green Deal. This means implementing the use of renewable energy as well as continuing on the path of ecological transition and energy efficiency. Furthermore, Conte addressed the issues of workers’ rights, support for entrepreneurship, and the super bonus project. His party counts 11.9% of support according to Tecné Italia’s opinion polls.

Shortly afterward, Enrico Letta chimed in, representing the leader of the Democratic Party, now reported at 21.9%. Letta thinks that this election could jeopardize Italy’s future for the next five years. After reminding the instability of the Italian government in the previous 15 years, he insisted on defining his party as “always linear and reliable.” His program’s key concerns are energy independence, the strengthening of the EU, and the support for entrepreneurs and the population during the current energetic crisis.

Right after that, it was the turn of the right-wing coalition. First to speak was Giorgia Meloni, leader of Fratelli d’Italia. According to the opinion polls, her political party is considered the one with the highest support (reported at 24.8%). Meloni has always been a critic of Mario Draghi’s government. However, she insisted on defending the national interests with reforms that can guarantee energy independence, the national brand’s promotion, and the need for national representation. Furthermore, Meloni wants to offer a new Italian role in the geopolitical balance. In her view, Italy should be free of Russian and Chinese influences.

Finally, Matteo Salvini and Antonio Tajani took the floor. The second one is Forza Italia’s coordinator (reported at 10.4% of support). In his speech, he maintained the need to re-launch Italian industries. Moreover, he stressed the importance of strengthening Italian presence abroad by exporting Italian expertise to big international markets.

Before Tajani, Matteo Salvini, leader of the political party Lega, had a pretty controversial talk. Salvini said he wanted to open his speech by taking up what inspired him the most. He was probably referring to the EU sanctions against Russia since most of his talk was about that. On this point, Salvini held that those sanctions are damaging EU countries’ economies instead of Russia. He supported his thesis by mentioning studies by The Economist and other research institutes. The sanctions are “an instrument that should stop the war and harm Russia, but their effect seems to be the opposite,” Salvini maintains. His view is even more controversial if we remember that his party (now with 12% of support) has often been accused of sympathy for the Kremlin.

About Salvini’s claims, Carlo Alberto Carnevale Maffè, professor at the Bocconi University School of management, said: “Who claims that the sanctions do not affect Russia is ignorant in economics and overt geopolitical bad faith.” To disprove Salvini’s statement, he mentioned a study by the Yale School of management with the meaningful title “Business Retreats and Sanctions Are Crippling the Russian Economy.”