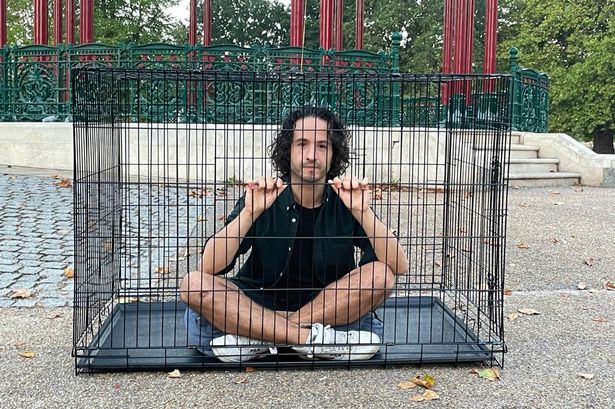 According to a story published by MyLondonNews on August 26, 2022, a man in Clapham took drastic action on International Dog Day to gain awareness of thousands of dogs who are abandoned in shelters all over the UK.

Giuseppe Bloom-Mangione, aged 35, owns a community enterprise company called muthapuppa and locked himself in a cage. The article reported that he did this for 13 hours in Clapham Common to raise awareness about this.

Muthapuppa’s core mission is to have its own rehoming and rescue centre for dogs and help take the pressure off existing centres.

Since 6am on Friday 26 August, Mangione has been inside the cage, near the bandstand in the busy area of South West London park. Him doing this will bring attention to the millions of homeless dogs that are being abused. He also noted that the thousands of dogs already in rescue centres in the UK, are in the midst of a dog welfare crisis.

He said to MyLondon that “We are in a sort of perfect storm at the moment. We are in the midst of the dog welfare crisis and I don’t think enough people know about it. There are thousands of dogs in rescue and rehoming centres looking for a forever home.”

He added “There are many factors such as puppy farms, backyard breeders, and people finding out they don’t have enough time to look after a dog since returning to the office. There are a lot of things people don’t expect when it comes to owning a dog, such as the costs involved, and with the bills going up as well. This has seen a surge of dogs being abandoned and handed in.”

Giuseppe found a report made by Direct Line that one in four centres have to turn dogs away due to lack of space. Emma Slawinksi, director of advocacy and policy at the RSPCA, told The Mirror: “We are on the brink of an animal welfare crisis due to the rise of pet ownership during the pandemic, coupled with the cost of living pressure, especially on lower incomes. It’s absolutely heartbreaking.”

This issue is the reason Giuseppe wants to highlight the problems dogs are facing this year. Throughout the day, he has been talking to people about what they can do for the dogs. He knows “being in a cage is synonymous in people’s minds with dog rescue so hopefully people can make that link.”

He wants to encourage adoption and fostering from charities like Battersea Dogs, All Dogs Matter, and Blue Cross.