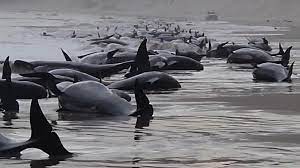 In two successive "super pod" beaching incidents, more than 500 pilot whales have been reported to have lost their lives. The whales washed up on the Chatham Islands and Pitt Island shores on Friday and Monday, respectively. While the number of deaths recorded on the Chatham Islands was 250, Pit Island witnessed the demise of about 240 whales.

The Chatham Islands and Pitt Island lie more than 800 km off the comparatively accessible New Zealand east coast. The remoteness of both the beaching locations made it difficult for the conservationists to act quickly. Additionally, the Chatham Islands are only inhabited by as many as 800 people. Pitt Island is even more unreachable as only 40 people live on it.

Due to the unfortunate state of the animals, it was officially decided to euthanize the survivors. The Pacific waters happen to be replete with sharks who would be on the lookout to feed on the stranded whales. As per Dave Lundquist, a marine technical advisor for the government: "This decision is never taken lightly, but in cases like this it is the kindest option."

The general manager of Project Jonah, Daren Grover, conveyed that the severe lack of networks and people in the isolated regions turned the incident into one of the greatest tragedies of the time. Refloating the pilot whales, still alive and battling for life, would amount to possible human deaths. Project Jonah is an organization that mobilizes help in the conservation of marine life.

The conservation department arranged for its trained workers to release the whales in distress with the help of the local Maori and Moriori tribes. The remains would be allowed to decompose naturally.

Beachings have been fairly frequent in the Chatham Islands owing to a large population of pilot whales residing close to its coast. About 1000 whales beached on the same shore in 1918, making for the largest record of pilot whale strandings in the world. In 2017, over 400 whales were found stranded on Farewell Spit in New Zealand. As per Project Johna's information guide, 300 whales or dolphins wash up ashore each year in the island country.

Despite the abundance of case studies, the reason behind mass beachings hasn't yet been discovered by scientists. However, the depreciation of marine waters owing to human interventions has been seen as a contributing factor. Microplastics from human waste have been found in beached whales across the globe, making them sick enough to choose to be stranded. Additionally, underwater bomb explosions have also led to similar events in the past. While reasons can be as natural as old age, it is concerning to witness recurring instances where whole pods are collectively deceased.

The death of such large communities of marine life paints a grim and saddening picture. It calls for connectivity projects at a conservationist level. Although human beings have had a significant role to play in accelerating the rate of such incidents, rescue collectives that are well equipped, even on the most isolated coasts, could help assist in re-flotation drives.