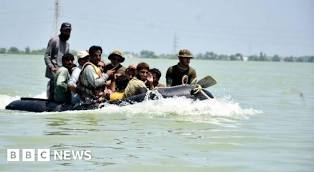 Beginning from mid-June, Pakistan has been bombarded with grievous rain and flooding and is now enduring an aberrant eighth cycle of the monsoon, far exceeding the typical three to four cycles of rain. As of recent reports, 937 people have died and 33 million have been affected by the rain and floods. However, the people have not yet lost hope as Pakistan’s National Disaster Management Authority, the Pakistani Army, and the Provincial Disaster Management Authority onerously work towards succoring those who have been displaced or have become homeless as a result of the calamity.

Currently, officials are witnessing most of the turmoil in Balochistan and the southern Sindh province, in which 540 people have died. Locals are being impacted the most by the floods, as they experience the death of their loved ones and the destruction of their homes. Fida Hussain Shahani is one of the victims that was hit hardest by the year’s brutal floods. Recounting a poignant story he shares, “the flood water kept rising and entered our house. While trying to reach high ground, my 17-year old son was left behind. I only managed to find his body this morning.” Luckily, he was able to gain access to volunteers who would help escort his family to safety, but he goes on to reveal the devastating trend he has been seeing, where “[t]hings were not so bad even in the 2010 floods. We never had to leave our village, but this time everything is destroyed.”

Pakistan’s Prime Minister Shehbaz Sharif met with numerous international diplomats to solicit funds to combat the flooding. He also narrowed down all the variables to one common denominator that must be engendering the flooding: climate change. The Prime Minister argued that his country was currently fighting to survive on the frontlines of climate change, so they must shift their focus to emphasize more heavily on curtailing their carbon emissions and leading more sustainable lives. As it so happens, PM Sharif is unintentionally delivering on his promises, as wide regions across Pakistan are shutting down their utilities. Thus they are cutting off electricity, gas, and internet access, in order to deal with the crisis.

Unfortunately, it seems that Pakistan will have to endure the flooding as long as the incessant rains push the boundaries of nature. This uncharacteristic event would drive up August’s measure of rainfall by 784% in comparison to the average amount of rainfall that they receive in August. However, Pakistan also learned two significant lessons from these massive flooding, which were that climate change must be addressed with a higher prioritization and Pakistan’s infrastructure must be reinforced to prepare for worse eventualities that may spring up in the future, no matter how early that future may be.