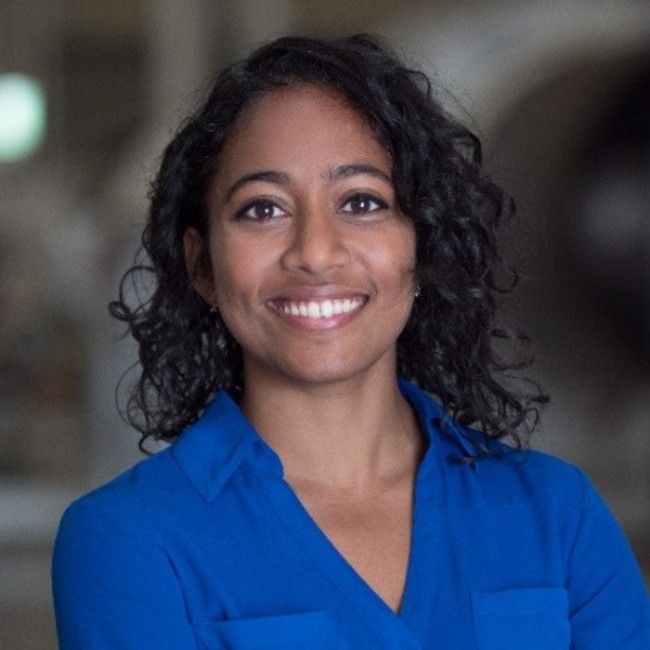 Following in the footsteps of her illustrious predecessors and carrying forward the pride of Indian women, 31-year-old Sirisha Bandla is all set to fly into space. She will be the third woman and fourth person of Indian origin to achieve this feat. The aerospace engineer is part of the Virgin Galactic’s 6 member crew that will fly into space along with their billionaire founder Richard Branson on VSS Unity scheduled to blast off on July 11 from New Mexico. It will be the company’s fourth crewed test space flight.

Who is Sirisha Bandla? Sirisha Bandla is an Indian-origin aerospace-cum-aeronautical engineer currently serving as the vice president of govt. affairs and research operations at Virgin Atlantic. She has her roots in Andhra’s Tenali. She is the second Indian-born woman after Kalpana Chawla, who will be traveling to space.

According to reports, she was born in Andhra Pradesh's Guntur and grew up in Houston, Texas. She was born in Tenali when her US-resident parents Dr. Murali and Anuradha, were in India on a visit about 25 years ago.

Her father Dr. Muralidhar Bandla, is an agriculture scientist who migrated to the United States for better opportunities. He is a member of Senior Executive Services in the US government and is presently working with the US Embassy in India.

Sirisha’s grandfather Bandla Ragaiah is also an agricultural scientist from Janapdu village in the Guntur district. He is said to have inspired her to learn more sciences which finally led her to study space.

“I have always seen her zeal to achieve something big and finally, she is going to fulfill her dream. I am sure she will succeed in this mission and make the whole country proud” he said beaming, with pride at his granddaughter. He added that Sirisha has always been active and fearless.

“It is a thrilling moment for the entire family,” Dr. Kanneganti Rama Rao, uncle of Sirisha, was quoted as saying. “Of course, the coolest thing is that she gets to hobnob with Richard Branson! We all are very proud of her and wishing her safe travels!’’ he further added.

Her biography on Branson’s company website explains that it was Sirisha’s childhood dream to travel, and learn more about space. This led her to pursue pure sciences.

She is a graduate in aerospace, aeronautical, and astronautical engineering from Purdue University and also holds a Master of Business Administration degree from Georgetown University.

She began her career at Virgin Galactic in 2015 as a government affairs manager and is now the vice president of government affairs for Richard Branson's company since January this year. She was also a part of the management team of the Washington operations for Virgin Orbit.

Bandla has also worked before for a space policy job at the Commercial Spaceflight Federation (CSF), an industry association of commercial spaceflight companies and L-3 Communications in Greenville, Texas, as an aerospace engineer.

She currently also serves as a member of the board of directors of the American Astronautical Society, and Future Space Leaders Foundation. She is also a member of Purdue University’s Young Professional Advisory Council.

She told the media that initially, she wanted to join the US Air force as a pilot. But at the high school level, poor eyesight had discouraged her dreams of becoming either a pilot or astronaut. However, she explained that SpaceShipOne becoming the first private vehicle to travel into space had reignited her dreams and think beyond NASA.

Now Sirisha Bandla will be one of the six space travelers aboard VSS Unity of Virgin Galactic, when it is scheduled to take off on July 11 from New Mexico. As astronaut No 4, her role will be that of a researcher experience. Sirisha Bandla and Beth Moses will be the two women crew members on the trip. 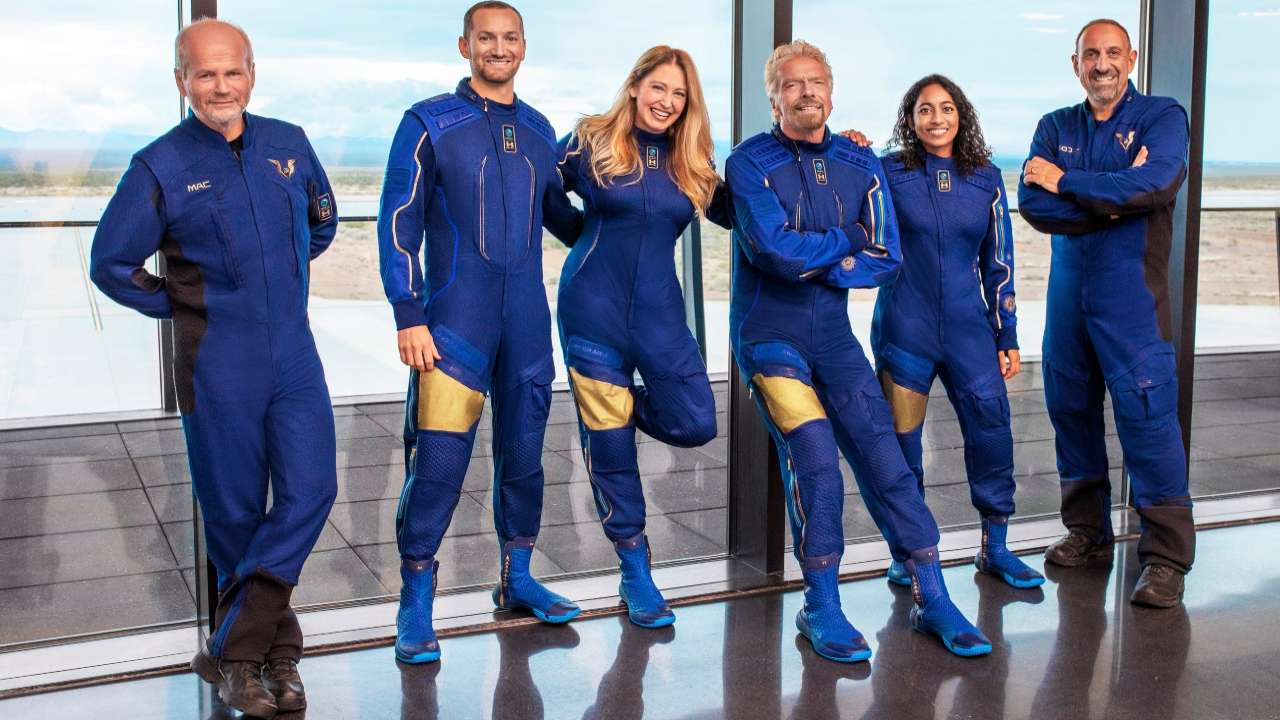 Onboard she will be evaluating the human-tended research experience, using an experiment from the University of Florida that requires several handheld fixation tubes that will be activated at various points in the flight profile, the company said.

She had told Space.com last month that the Virgin Galactic flight will last anywhere between approximately 60 and 75 minutes and will take off and land back at Virgin Galactic's Spaceport America in New Mexico.

Sharing the exciting news of her inclusion in the flight crew, Sirisha tweeted, “I am so incredibly honored to be a part of the amazing crew of #Unity22, and to be a part of a company whose mission is to make space available to all.”

Overwhelmed with joy, she further added, “I didn't need to tweet this since my friends flooded the feed yesterday with it. I was overwhelmed (in a good way!) by messages of love, unrecognizable capital text, and positivity yesterday. Slowly working my way through them...one platform at a time!”

Back home in India, people are also extremely proud of her work and this rare achievement for Indians. She is now going to be the third Indian-origin woman and the fourth Indian overall in space. She is preceded by Rakesh Sharma, Kalpana Chawla, and Sunita Williams.

Naidu shared two pictures - one featuring her with all five members of the crew and a solo photo of Bandla. “On July 11th, Sirisha Bandla with Telugu roots is set to fly to space aboard VSS Unity with Richard Branson and the team marking the dawn of the new space age, making all Indians proud!” he wrote. 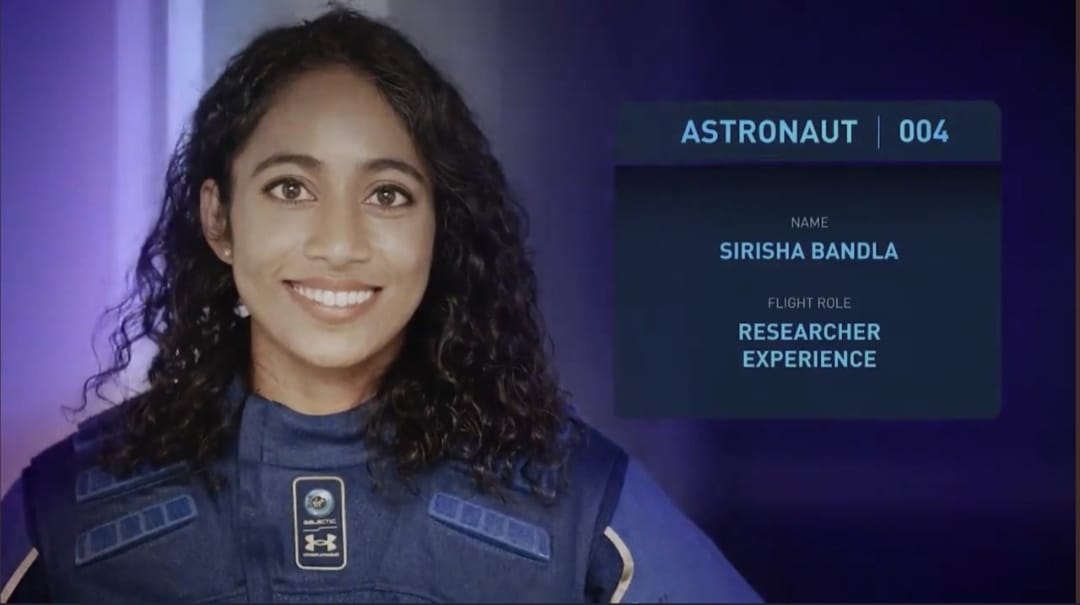 KC Chekuri, from Dallas reportedly a family friend of Bandlas, was quoted as saying, “It’s a proud moment for all the Telugus across the world and an inspiration for generations.”

Sirisha is also associated with the Telugu Association of North America, (TANA), which is reportedly the oldest and biggest Indo-American organization in the region. A few years ago, TANA honored her with the Youth Star Award.

“We knew Sirisha Bandla will become a rockstar in the future when she won the Youth Star Award for her achievements way back in 2014,” said Vampala V Chowdury, a member of TANA.

Virgin Galactic is an American private space agency that will launch its spacecraft ‘Unity 22’ next weekend as part of the test flight. Four mission scientists, including the billionaire entrepreneur and founder, Richard Branson, will evaluate the experience of the Virgin Galactic Holdings Inc’s test flight on July 11, Branson's space tourism firm had said on July 1.

A successful flight by Virgin's VSS Unity spaceplane would mark a key milestone in a race to usher in a new era of private commercial space travel.

Three other Indians in space – 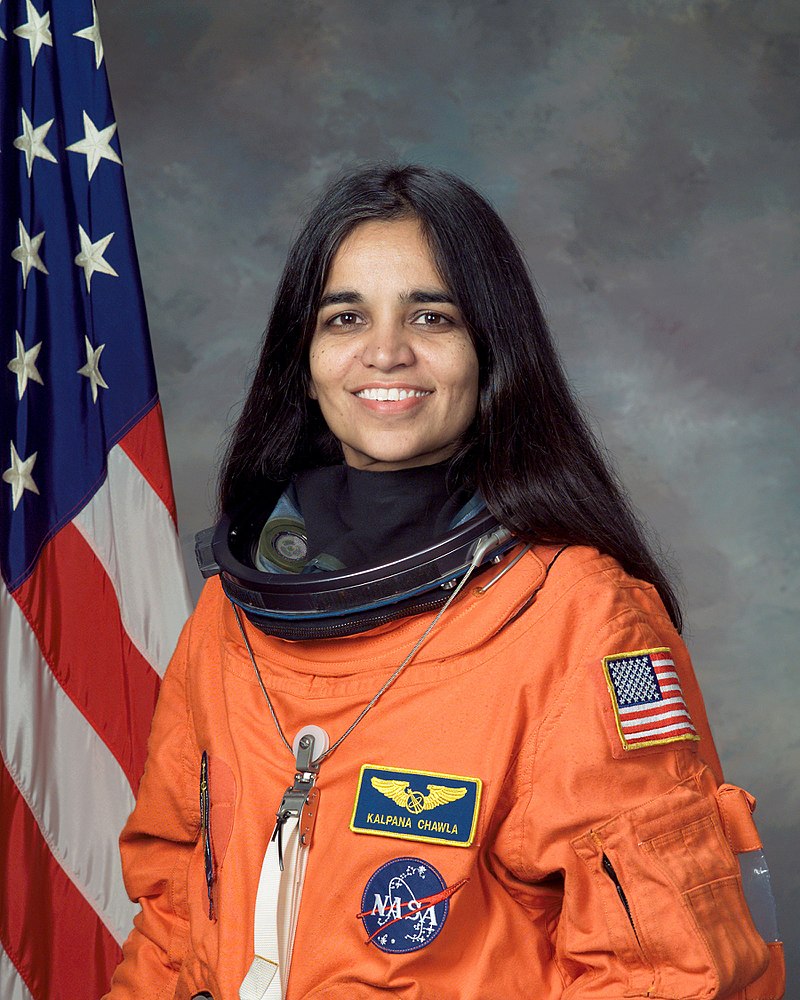 Kalpana Chawla was an American astronaut and engineer who was the first woman and second of Indian origin to go to space. She first flew on Space Shuttle Columbia in 1997 as a mission specialist and primary robotic arm operator. 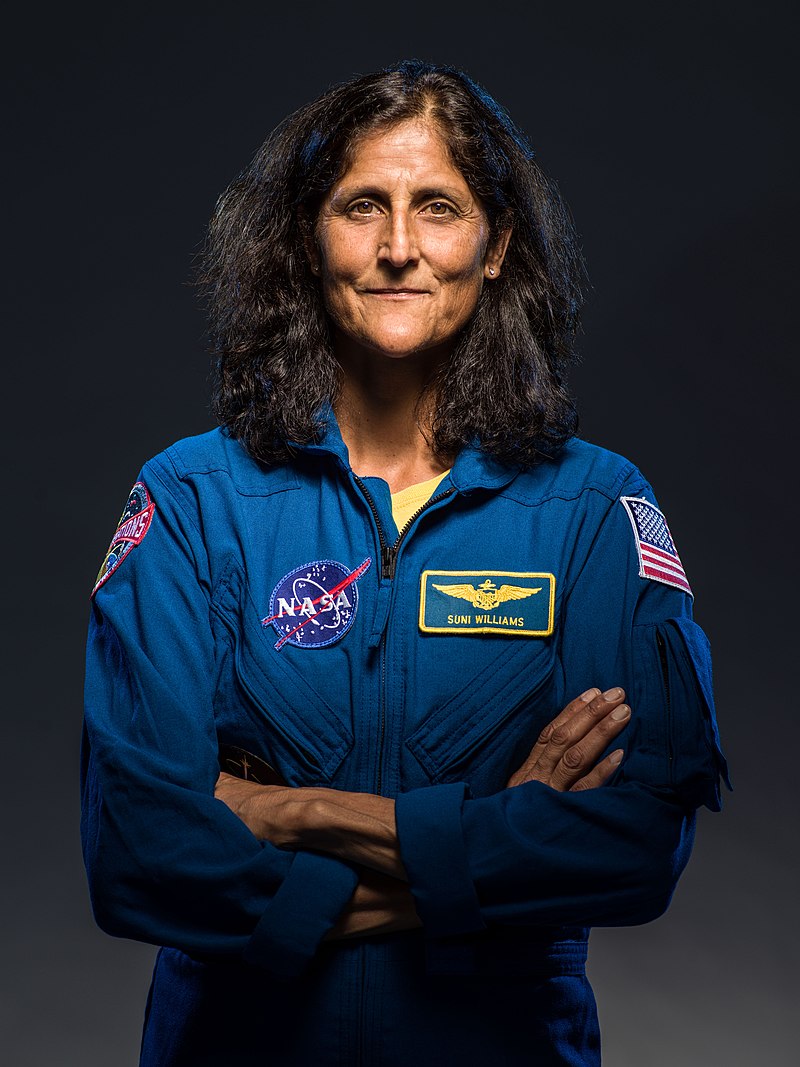 Sunita Lyn Williams (née Pandya) is an American astronaut and the United States Navy officer who formerly held the records for most spacewalks by a woman (seven) and most spacewalk time for a woman (50 hours, 40 minutes). She was the second woman and third person of Indian origin to go to space. 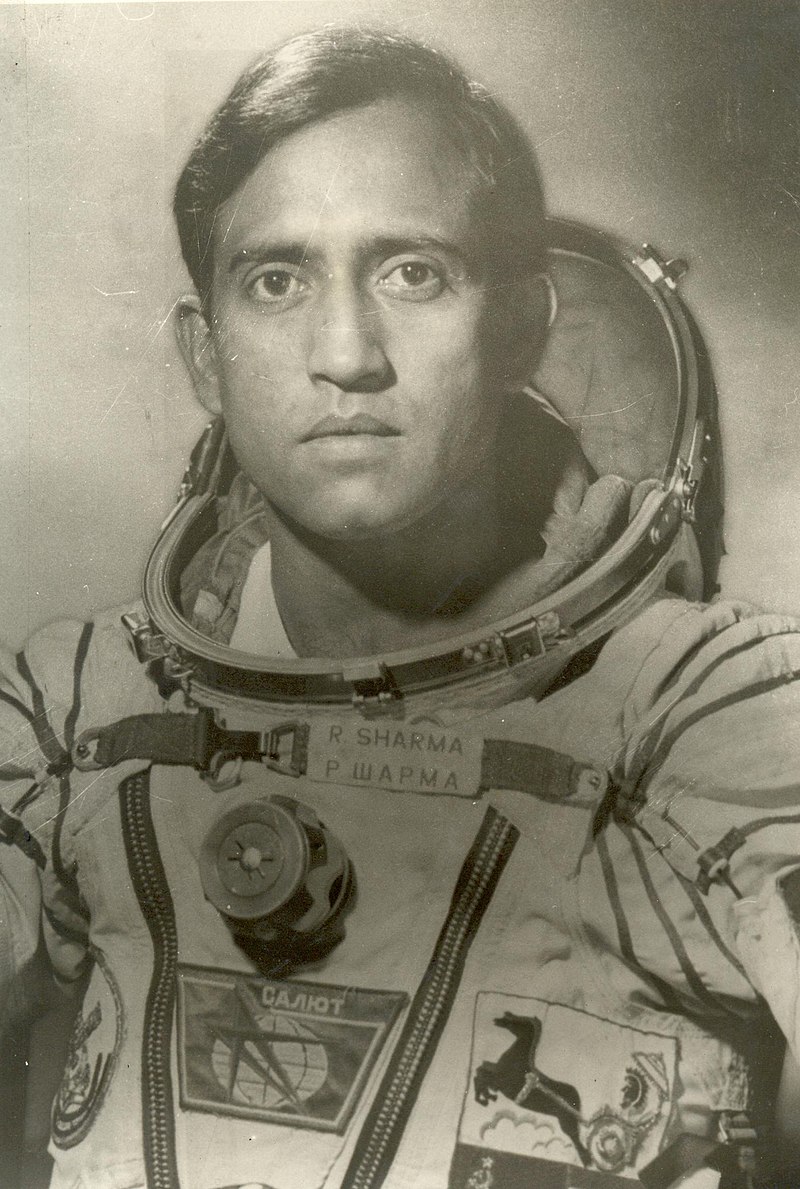 Wing Commander Rakesh Sharma, AC is a former Indian Air Force pilot who flew aboard Soyuz T-11 on 3 April, 1984 as part of the Soviet Interkosmos program. He is the first man and only Indian citizen to travel in space. Although, there have been other astronauts with an Indian background who were not Indian citizens.