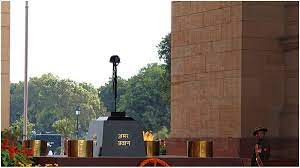 Government's answer to the opponents, 'Not extinguished, Amar Jawan Jyoti will be shifted'

The Amar Jawan Jyoti, which has been burning for the last 50 years at the India Gate in the capital Delhi, will be merged with the flame burning at the National War Memorial today. Officials with the army say the Amar Jawan Jyoti will be merged with the burning flame at the National War Memorial at 3:00 pm today, which is only 400 meters from the other side of the India Gate. As a memorial to Indian soldiers who died in the Indo-Pak war of 1971, Amar Jawan Jyoti was established. The war was won by India, and Bangladesh was formed. During the time of Prime Minister Indira Gandhi, it was inaugurated on 26 January 1972. The ceremony will be presided over by Air Marshal Balabhadra Radha Krishna who will join the two flames. The India Gate Memorial was built by the British Government in memory of the Indian soldiers who lost their lives between 1914-1921.

The government targeted the leaders who made the allegations. The government said that it is ironic that those who did not build a National War Memorial for 7 decades are now creating a ruckus while our Indian soldiers who lost their lives in wars are being paid a lasting and proper tribute.

Congress leader Rahul Gandhi has attacked the government regarding this. Rahul Gandhi said, 'It is a matter of great sadness that the Amar Jyoti, which used to burn for our brave soldiers, will be extinguished today. Some people cannot understand patriotism and sacrifice – never mind, we will burn the Amar Jawan Jyoti once again for our soldiers” ( source: times of india )