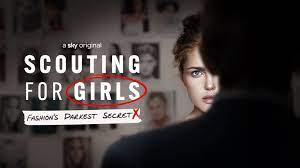 Former four models, Marianne Shine, Carre Sutton, Jill Dodd, and Shawna Lee share their stories of the sexual abuse they faced while working in the modelling industry. They are appearing in the new documentary called Scouting For Girls: Fashion’s Darkest Secret.

This program is based on an investigation by Lucy Osborne and the Guardian, and will reveal the exploitation and abuse inside the fashion industry. The series is a Sky TV original and will start on the 24th June in the UK. It is not available internationally but will be soon.

Care Sutton is the first to tell her story. She was only 17-years-old when she was repeatdly raped by one of the most powerful men in the industry. In 1986, she was sexually assualted by a French agent named Gerald Marie. This happened several times a week over a period of time when his wife, Linda Evangelista, was out of town.

She says in a tearful interview how “he basically forced himself on me and raped me.” She also recounts being “so devastated and terrified.” Fast forward a few years later, now at age 53, she has risen to fame by the name of Carre Otis, and told Sky News that she would happily go “face to face” in court against Marie, who has denied all sexual abuse allegations made against him from multiple, different women.

Gerald Marie is the former president of Elite Models in Paris, and one of the biggest model agents in the world. Due to his high status, he remains untouchable among the rumours that swirled about his treatment of young models. There is no evidence that his now ex-wife Evangelista knew of the alleged abuse. Additionally, she issued a statement of praise back in 2020 that her former partner’s 11 accusers have ‘courage and strength’ for speaking out. Based on her own experiences and hearing their side, she believes they are telling the truth.

Jill Dodd is another victim of Marie. Her story starts after a night out in Paris, she claims Marie also raped her in the year 1980 when she was a model at 20-years-old. She later went on to have a relationship with a Saudi arms dealer, Adnan Khashoggi. She claims he had paid up to $50,000 to be introduced to her as quoted by the London Globe. Dodd tells Sky News that “we were just young and being taken advantage of, groomed, and sold by our agents.”

She admits saying, “in reality, I had no chance against powerful men that were 20 years older and plotting against me.”

Jean-Luc Brunel is another senior figure in the modelling industry who Marianne Shine became a victim of while working as a model in the 1980s. He was detained back in December 2020, because he was part of an inquiry regarding allegations of rape and sexual assualt. He committed suicide this year in February while in prison. Marianne Shine had been raped by him and told Sky News that the news of his death was “infuriating.”

France’s statutes require that allegations of sexual abuse are to be reported within 20 years for minors, and 30 for adults. Sutton thinks there are more alleged victims of Marie and wants them to come forward. She has daughters and she wants a change for them as the industry is unregulated when it comes to minors and young adults.

Climate Change: What Does Future Hold For UK?