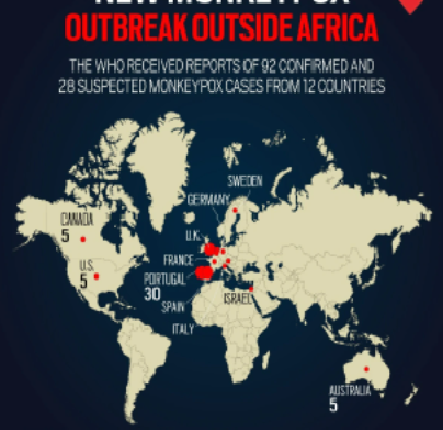 Monkeypox is a viral zoonotic disease.  It is caused by the monkeypox virus.  It is transmitted between rats and primates to humans.  The name monkeypox comes from the first recorded case of animal disease in 1958.  It is commonly found in tropical rainforests, such as Central and West Africa.  The rare virus is slowly spreading to other parts of Africa and Europe.

Diagnosis begins with fever, regular headaches, body aches, low energy and skin rash within 3 days of fever.  It lasts 2-4 weeks and in the absence of any treatment it stops.  The rash on the body develops into a scab, which later indicates that the person is no longer infected.  In case of slightest suspicion, it is necessary to consult a healthcare professional. Lack of immunity can lead to serious cases, such as skin infections, pneumonia, and eye infections, among others.

It Is a rare viral infection and a mild self-limiting disease that can spread only after close contact with an infected person.  The monkeypox virus can enter the body through close contact such as skin, eyes, mouth, nose or even sex.  The National Center for Disease Control (NCDC) and the Indian Council of Medical Research (ICMR) are closely monitoring the prevalence and spread of the virus.  It was reported last week in at least 11 non-African countries, including Israel, the Netherlands, the United Kingdom, Spain, and France.  Many people in different countries in Spain and Canada have been infected with this disease.  The World Health Organization (WHO) has called an emergency meeting to consider the latest situation.

Scientists believe that the next outbreak of monkeypox will be like covid.  Unlike Covid, it will not last long given isolation and vaccination protocols are followed properly.  The Food and Drug Administration (FDA) has approved a smallpox drug to treat monkeypox patients.  Some of the measures they are advised to take include self-isolation and proper hygiene.

Based on the information available based on epidemiological investigations, the reported cases have no established travel link in the local area.  Cases reported in Central Africa are relatively more serious than in the United Kingdom and European countries.  About 3-6% of reported cases have led to deaths in local countries, covering children and the majority of people with low immunity.  It is fatal in 1-11% of infected people.