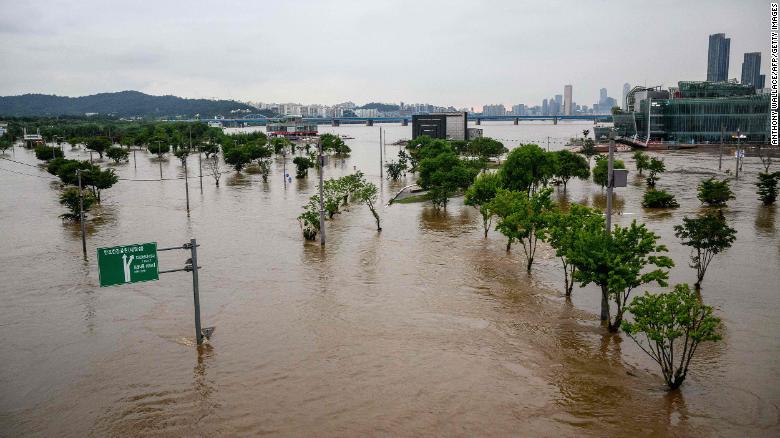 In Southeast Asia, one of the main concerns they have every year is the monsoon season, which is usually June through September. South Korea is the most recent Asian country to endure an unusually strong monsoon season. Earlier this summer, historic floods in Bangladesh affected over 7.2 million people, while hundreds were evacuated in China due to flash flooding in the country's southwest and northwest.

In an interview with the Washington Post, a citizen of Seoul, Yoon Jin-hyeok, recalled one particular incident. As the rainwater gushed into his semi-underground apartment, the 26-year-old and his two roommates scrambled to pump out water from their 390-square-foot home. However, the water quickly filled up to their knees. "I felt so desperate," Yoon stated. Yoon regards himself as fortunate. He survived. A few miles away, a girl, her mother, and her aunt, all of whom had Down syndrome, drowned in their semi-basement home. A resident with a developmental handicap fled but returned to retrieve her cat, becoming stuck inside and dying.

At least 11 people, including one child, were killed in the floods, which occurred after the city's greatest rainfall in more than a century. As of Tuesday, at least 1,400 people were displaced in the Greater Seoul area with many people taking refuge in schools and community centers. South Korean authorities have recorded the highest amount of rainfall in decades with some areas receiving 497mm of rain and up to 141.5mm of rain per hour, which is the highest rate of rainfall in 115 years, according to CNN.

The fact that four of those killed in the flooding lived in banjiha semi-basement dwellings—the type popularized in the Oscar-winning film Parasite, which featured a disastrous flood scene—has focused attention on the country's housing crisis, in which homeownership is becoming out of reach for the middle classes, let alone those at the bottom of the economic scale. Approximately 5% of households in Seoul are thought to reside in banjiha houses.

For years, there has been mounting pressure on the government to offer more inexpensive housing, improve living conditions in banjihas, or phase them out entirely, as officials promised following public outrage over President Yoon Suk Yeol's handling of the situation.The housing market was a prominent issue in the March presidential election, and outgoing President Moon Jae-in was constantly chastised for his administration's inability to control it. Yoon, the election winner, has promised to alter Moon's housing plans. During his campaign, Yoon vowed to build 2.5 million new homes, half of which would be paid for with private funding.

Seoul's city government issued a statement on Wednesday that said, "In the future, in Seoul, basements and semi-basements (banjihas) will not be allowed to be used for residential purposes." Experts think the government's promise misses fundamental concerns that extend beyond the basement walls, such as growing living expenses, which force the most disadvantaged people to seek shelter in insufficient homes subject to floods and heat—two of climate change's most severe consequences.

The South Korean President said on Thursday that banjiha basements would be phased out during the next two decades. It is unclear where the approximately 200,000 families who rely on them for refuge will go. To accommodate the growing need, civic groups immediately advocated for more affordable housing.

Sohn Mal-nyeon, a 70-year-old Banjiha inhabitant, told the Korea Herald that the new statement was unlikely to result in real change. Well, what do you expect people to do? They live here because it’s cheaper, you know. " Residents have complained about the government’s negligence towards them.

“Since our flats are located in narrow streets instead of the main street, [the government] may not pay attention to us. There’s certainly a difference between a wealthy village [and us],” a resident told Reuters. So it seems the poor living in these tight, cramped spaces see no help coming from the government to ensure their safety.