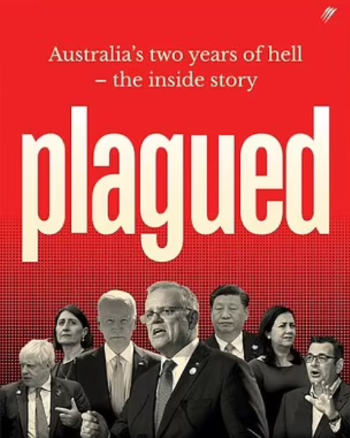 During the COVID-19 pandemic, Australia's former president, Scott Morrison has been signing himself to hidden ministries. Plagued, a new book by political journalists Simon Benson and Geoff Chalmers, have revealed "the inside," of Morrison's 2020-2021 plans.

Politicians and Australians are calling for Scott Morrison to resign from "the office," and many are asking if he will pay any consequences for his behaviour.

Mr Hunt and then Attorney-General Christian Porter thought giving a huge amount of power to one minister would be ‘an elegant solution.’

One of the biggest portfolios that Mr Morrison has sworn to share the health portfolio with Mr Greg Hunt is health minister.

Many MPs in Australia's government have proposed that Scott Morrison should step from politics.

Tasmanian independent Jacqui Lambie said the only people who can elect Mr Morrison for prime minister can put pressure on him to leave the office.

“The only people who can put pressure on him are the people of Cook who elected him in the first place. So, they need to decide for themselves whether or not this is normal behaviour or this is just really unsatisfactory and it’s not on and need to start making calls to his office to ask him to leave’’ she said.

The portfolios that Mr Morrison has sworn himself in with help from his colleagues includes finance with minister Greg Hunt’s support and then Attorney-General Christian Porter’s knowledge. He also signed himself into home affairs without Minister Mathias Cormann’s knowledge.

The Australian minister for environment and water tweeted extraordinarily. If Scott Morrison genuinely believed he was doing the right thing, why did he keep it a secret from the

The prime minister of Australia Anthony Albanese has been talking about Scott Morrison’s secret portfolios in multiple press conferences.

Anthony Albanese said we need to figure this issue out and make sure it doesn’t happen again.

'There's separate questions about the functioning of our democracy, about conventions and whether any conventions have been overturned and whether there's a need for any reforms required to ensure that something like this can never happen again,’ he told Sky News.

Mr Albanese is expected to give more information on this issue on Monday 22nd August 2022.