Myanmar is now emerging as the new Epicentre of Covid-19 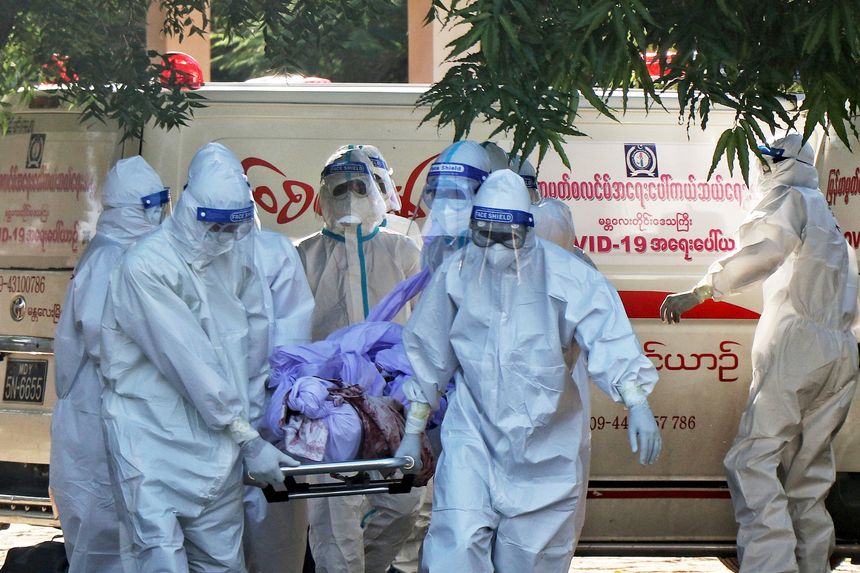 Myanmar is on the verge of becoming a super-spreader Covid state, fuelling epidemics across the region, according to the UN special rapporteur on the nation, who asked the Security Council to call for a ceasefire.

On top of a serious political and economic crisis brought on by the military takeover in February, the Southeast Asian country is seeing its most severe epidemic yet. Its immunisation campaign has come to a halt, testing has failed, and government hospitals are barely operating.

Doctors who have been at the vanguard of an anti-junta strike and refuse to work at government hospitals have been compelled to treat patients in secret because they are constantly threatened with military assault or arrest.

In an interview with the Guardian, Tom Andrews, the UN special rapporteur on the state of human rights in Myanmar, claimed that the actual number of instances and fatalities in Myanmar remained unknown. Journalists and physicians have been targeted, making it difficult to receive accurate information on the issue. "We recognise that this is a growing trend. Andrews stated, "It's a very quick, dangerously rapid rise."

Since June 1, 4,629 individuals have died of Covid, according to the military-controlled ministry of health and sports. The statistics are believed to be understated. According to the Irrawaddy news site, an independent outlet, military-controlled media stated on Tuesday that ten additional crematoriums would be erected in cemeteries in Yangon, Myanmar's largest city, to deal with the fatalities.

Andrews observed, "Three types of lines are prevalent in Yangon." "One in front of ATMs, one in front of oxygen supply – which is quite hazardous since people are shot at by Myanmar troops for standing in line for oxygen – and the third in front of crematoriums and morgues."

There is a severe shortage of oxygen, medical equipment, and pharmaceuticals in cities across the country. People have posted yellow and white flags outside their homes to indicate that they need food or medicine and, social media has been inundated with appeals for assistance and death announcements.

The military is said to have seized oxygen supplies. It has instructed suppliers not to sell to the general population, saying that tanks are being hoarded.

According to Andrews, foreign countries, especially Myanmar's neighbours, must act quickly or face the repercussions of an unchecked spread on their borders.

"With these very virulent variants – Delta and other kinds of the disease, which are extraordinarily dangerous, lethal, and contagious... Myanmar is becoming a Covid-19 super-spreader... "This is dangerous for a lot of reasons," Andrews said. It is just a fact that Covid has no regard for countries, borders, or political party ideologies.

"It is just a truth that Covid does not respect countries, boundaries, or political party ideas. It's a killer who doesn't discriminate. As a result of Myanmar becoming a super-spreader state, this region is vulnerable to much more suffering. "

He said that Myanmar's neighbours account for around a third of the world's population. China, together with Russia, has already thwarted moves by the UN Security Council to exert pressure on Myanmar's military.

The UN Security Council approved a resolution in February calling for ceasefires in all war zones so that health workers may safely administer Covid vaccines. In light of the Myanmar issue, Andrews believes the resolution should be renewed. It may open the way for more support from foreign organisations.

The military-run Myanmar Global New Light reported on Wednesday that junta chief Min Aung Hlaing had addressed a meeting "to strengthen cooperation with the international community, including ASEAN [Association of Southeast Asian Nations] and friendly countries in the prevention, control, and treatment of Covid-19." The specifics of the collaboration are unclear.

According to the Office of the United Nations High Commissioner for Human Rights, Junta troops have carried out at least 260 attacks against medical workers and facilities, killing at least 18 people. At least 67 healthcare professionals are being held by the military, with another 600 medics facing arrest warrants.

Military officers have posed as Covid patients in need of treatment to entrap medical volunteers in Yangon last week. According to a report by the independent site Myanmar Now, three physicians who rushed to aid have been jailed.

At least 5,630 individuals are being detained in detention centres around the country, including the Insein jail in Yangon, where the illness has spread. Last Monday, it was reported that U Nyan Win, Aung San Suu Kyi's lawyer and a prominent member of her National League for Democracy party, died of Covid after being infected in jail.

Since February, the military has murdered at least 931 individuals, including demonstrators, lawmakers, and bystanders.

According to Andrews, there is substantial evidence that crimes against humanity are taking place in Myanmar. "This isn't a rogue commander doing bad things here and there; it's very systematic, very clear... The junta is telling citizens on state television that if they go out on the streets [to demonstrate], they will be shot in the head. Then, all of a sudden, everyone is shot in the head. "

According to Andrews, international action is more important than ever. "The Myanmarese people are losing faith in the international community to care about what is going on in Myanmar," he added.