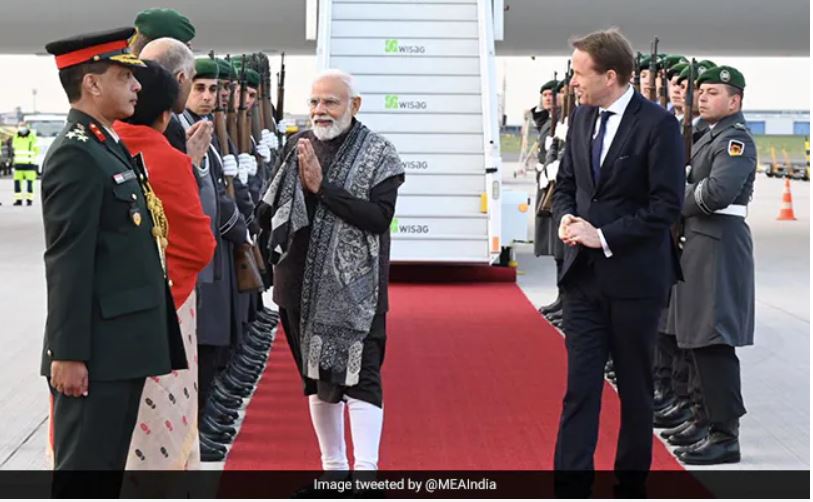 Narendra Modi’s Visit To Europe: A press conference was held to discuss importance of PM’s 3 Day-EURO visit. The panel consisted of Secretary west Mr. Sanjay Verma and Mrs. Neeta Bhushan, the additional secretary looking after central Europe division in the ministry among other dignitaries. The Foreign secretary Mr. Vinay Kwatra took the floor and briefed the attendees about PM’s day-to-day activities which read as follows,” Prime Minister will be leaving on a visit to Europe from tomorrow i.e. May 2nd , 2022. He'll be traveling to Germany, Denmark, and France for bilateral as well as multilateral engagements. The Prime Minister's three-day three nation tour has intense schedule with substantial and comprehensive agenda including wide-ranging interaction with the political leadership of these countries in diaspora on the top industrialists and CEOs.”

Mr. Kwatra gave the details of each day’s schedule, where he firstly, begin with Germany which is the first destination of visit. He added that Germany holds the presidency of g7. On May 2nd, tomorrow prime minister will co-host with German chancellor excellency, Olaf Scholz the sixth edition of India-Germany intergovernmental consultations ‘IGC’ in Berlin. This will mark Prime Minister's first meeting with chancellor Scholz after he assumed office last December. you would recall that prime minister's first telephone call with the foreign leader in was with chancellor Scholz. The meeting between the two leaders would act as a great platform that will not only strengthen the existing multifaceted bilateral partnership but would also define it and encourage to prepare an ambitious as well as a motivated agenda of cooperation and collaboration for the coming future for both India and Germany. The mentioned will also be inculcating the field of development partnership, green agenda, trade investment linkages and the overall strategic partnership.

He then briefly touched upon the intergovernmental consultation mechanism whose sixth meeting would be held tomorrow. Talking more on this Mr. Kwatra explained that this is a unique mechanism which brings together several ministers and officials from both sides to engage in bilateral discussions, culminating in a plenary session which is chaired by the two leaders to review take stock and assess the cooperation between the two countries across a range of areas as also to identify fresh areas of partnership

The focus on cooperation in the IGC plenary session is primarily along three strands:

During the IGC, Prime Minister Modi would be accompanied by senior ministers from government including the finance minister, the external affairs minister and the minister of state for science and technology and earth sciences.

In the evening, Chancellor Scholz will host a private dinner for prime minister on May 3rd.

Following that, at the request of Denmark's Prime Minister, Mette Frederiksen, the Prime Minister will go to Copenhagen for an official visit. In addition, he will attend the 2nd India-Nordic Summit, which will take place in Denmark.

Talks with Prime Minister Frederiksen and an official dinner hosted by her Majesty Queen Margrethe II, will be part of the bilateral component of the visit. India and Denmark had made an unparalleled partnership by coming together for the Green Strategic Partnership. The visit would give both parties the chance to assess their success and consider strategies to deepen our diversified partnership. The Prime Minister will attend an India-Denmark Business Forum and speak to members of the Indian diaspora during his visit.

Covovax Gets Nod for the Children Aged 12-17