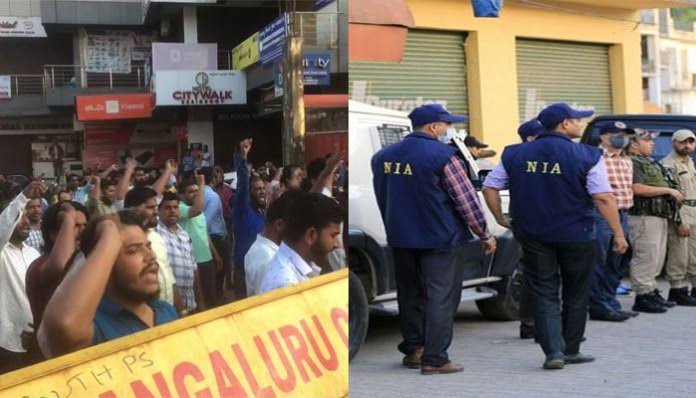 The rise in anti: Indian protests and cases nationally and across borders are alarming and concerning. The government prefers abiding by keeping in mind the diplomatic approach.

On Thursday morning, the NIA conducted raids at locations connected to PFI in numerous states. During operations in several states, including Uttar Pradesh, Kerala, Andhra Pradesh, Telangana, Karnataka, and Tamil Nadu, more than 100 top PFI leaders and officials were detained.

The NIA, the Enforcement Directorate (ED), and state police coordinated their efforts to conduct the operations. The organization called for a dawn-to-dusk hartal in Kerala on Friday to mark their protest.Raids and searches are being conducted against those reportedly supporting terrorism and running training camps. They were radicalizing others to join extremist groups as part of what is thought to be the "biggest ever" campaign to date.

Kerala had the most arrests overall, with 22, more than any other state.

According to the PFI state committee, the arrests are "unjust" and "part of atrocities by the state."On September 23, Friday, a hartal will be organized in the state to protest the fascist government, which is under the grip of the RSS, using federal agencies to stifle opposition. Additionally, the PFI urged the "democratic believers" to successfully oppose the "fascist regime that represses civil liberties."

The anti-terror agency searched 38 places in Telangana and Andhra Pradesh and then filed charges against four PFI employees under the Unlawful Activities (Prevention) Act (UAPA).

The charge sheet claims that these PFI officials formed a company in Munnar, Kerala, to launder money acquired abroad and finance the group's "radical actions." Additionally, it is asserted that these officials participated in the PFI's putative creation of a "terror group."

The two are also associated with paying Rs 3.5 lakh (from August 2018 to January 2021) to PFI member Anshad Badharudeen. He was apprehended by the Uttar Pradesh Police Anti-Terrorism Squad alongside PFI member Firoz Khan last year. The police found them possessing seven live bullets, a 32-bore pistol, and homemade explosive devices.