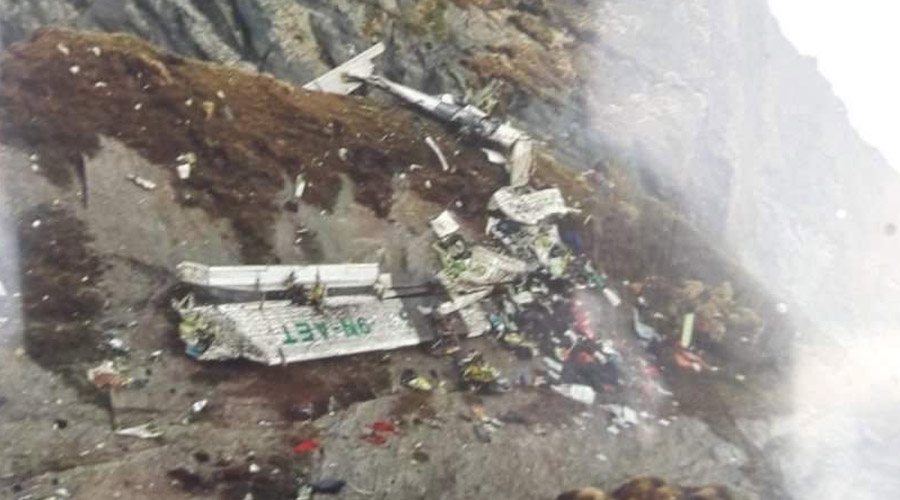 The private plane Tara, which had 22 people on board, including four Indians, was discovered wrecked in Koang hamlet on Sunday morning, hours after it went missing in the hilly terrain.

The search operations that were interrupted due to inclement weather yesterday, May 29th, were restarted this morning.

According to intelligence from the Nepal army, the debris of the missing Nepalese passenger plane, which had 22 passengers on board, has been discovered by rescue personnel in Sans square, Mustang district, Nepal.

Tara is a twin-engine 9N-AET aircraft that carried three crew members and 19 passengers, four of whom were Indians, two Germans, and the rest Nepalese. It took off from Pokhara, a popular tourist destination, and lost communication with air traffic after 15 minutes. In Koang Village, a private plane crashed.

Plane debris can be seen at the accident scene in the newest aerial photos published by the Nepal army. According to the Civil Aviation Authority of Nepal (CAAN), 14 bodies have been found in the wreckage of the ill-fated plane in the country's Mustang province at a height of 14,500 feet.

Officials believe that no survivors will be discovered. The cause of the jet crash is unknown because the plane's black box has yet to be discovered. Authorities in Nepal are conducting a search operation. More information on the subject is also awaited.

Nepal is home to eight of the world's highest peaks, including Everest, and has a history of air-in incidents due to inclement weather and hilly airstrips.

A US Bangladesh Airlines flight from Dhaka to Kathmandu crashed and caught fire on landing in early 2018, killing 51 of the 71 passengers on board.