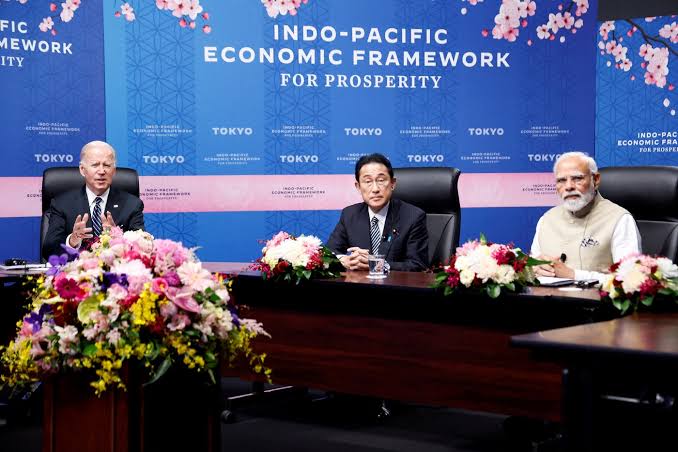 India is demonstrating its presence on the international platforms and representing itself as the most evolving nation in the Indo-Pacific region as India showed its interest in the Indo-Pacific Economic Framework for Prosperity (IPEF). IPEF is a US-led new economic initiative for the region for which Prime Minister Mr. Narendra Modi, US President Joe Biden, Japanese Prime Minister Fumio Kishida, as well as leaders of 10 other countries joined for a virtual launch in Tokyo, Japan.

From Tuesday all the negotiations under this initiative will begin. There few important topics this initiative will focus on are trade, clean energy & decarbonisation, taxes, supply chains, resiliency, and anti-corruption measures. The countries involved in this initiative are all four Quad members, New Zealand and seven out of 10 members of the Association of South-East Asian Nations (ASEAN). These all together consist of a major percentage of the global economy that's about 40%.

After leaving RCEP (Regional Comprehensive Economic Partnership), this is the most important economic form for India. Prime Minister Modi has exhibited a positive attitude towards the initiative and expressed his desire to work with all the other members in collaboration with flexibility. He focused on Supply chains for building trust, transparency and timelessness among the nations in the framework. He talked about a bright future of the framework towards building peace as well as prosperity in the region.

The US is making the terms clear about this initiative initially, IPEF is not to discuss talks related to reducing tariffs and having any free trade agreements as well as increasing the market access to the countries. Thus, it won't replace RCEP or CPTPP (Trans-Pacific Partnership) which the US left in 2017. Members of ASEAN, who are close to China, such as Cambodia, Laos, and Myanmar are not included in this framework.

During the interview with the media, the US Commerce Secretary Gina Raimondo explained the objective of the framework is business-related. Indo-Pacific is seen as the next capable zone of resources now, and companies in that area are considering China as their best alternative. Hence, the US wants to attract all those businesses and pull the investments of those businesses from China as well as make the US a reliable part of growth.

US Trade Representative (USTR) Katherine Tai had a different perspective on IPEF, explaining that the Trans-Pacific Partnership was meant to be a free trade deal. However, the US Congress was unable to deliver on the plan due to internal wrangling over trade concessions.

India is observing all the negotiation details about the important points are still empty in the IPEF as there are some differences in the views of The US and India related to one of the IPEF’s functions in the Indo-Pacific dealing with documents as well as a fact sheet released after the launch will be to establish and follow criteria for the digital economy and cross-border data flows and data localization, particularly in tabled data and localization in the areas that are bothering India whereas there are several benefits like the framework will work against inflation in the region and commitments about clean energy & decarbonisation.