A new statue was presented at the Boston Common on Friday featuring Dr. Martin Luther King (MLK) Jr. and his wife, Coretta Scott King, that has both positive and negative responses from the people.

This article aims to spotlight the responses that have been generated by the public from the unveiling of the piece. The 20 ft. tall and 40 ft. wide statue is titled “The Embrace” and is made to capture the photograph of Dr. Martin Luther King Jr. embracing his wife after discovering that he won the Nobel Peace prize in 1964. Although, the statue was presented to show only the arms of MLK and his wife in a hug, which was met negatively by some of the audience and family members.

“For my family, it’s rather insulting,” Coretta Scott King's first cousin, Seneca Scott, wrote. “Ten million dollars were wasted to create a masturbatory metal homage to my legendary family members." In a discussion, Scott referred to the statue as “a stump that looked like a penis” and concludes that the figure was “a joke.” 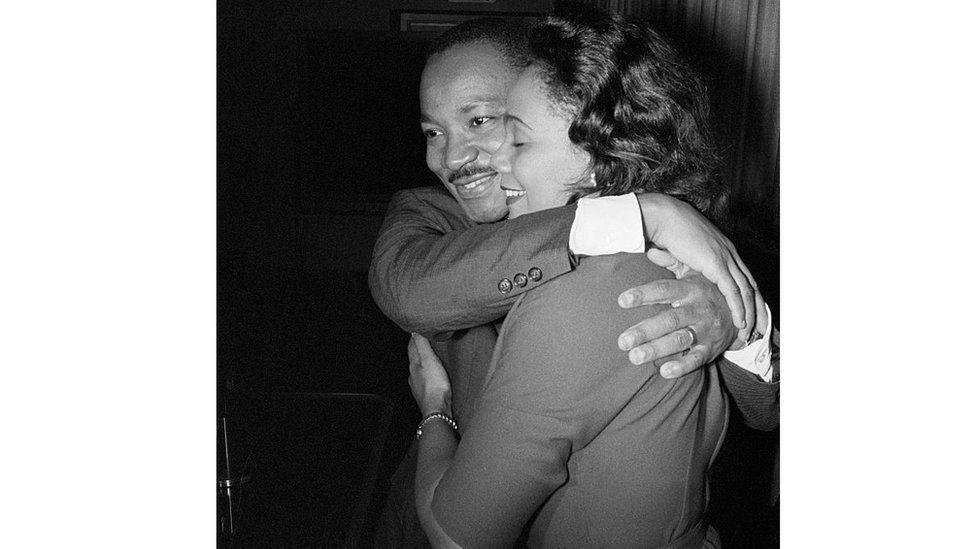 Martin Luther King Jr. hugs his wife, Coretta Scott King, after finding out he has won the 1964 Nobel Peace Prize.

As a result, the headless design of the sculpture has caused mockery among the people as others have referred to it as “hideous” and “disrespectful” to the two individuals. It has also been perceived as a sexual action instead of an honorable act.

“I can't shake the feeling that this view of ‘The Embrace' sculpture from this angle looks like two disembodied arms & hands hugging a butt,” Boston-based activist and writer Chip Goines said on Twitter. “Why do the MLK monuments have to be so bad?"

Karen Attiah, a columnist for The Washington Post, criticized the statue for not just the design choice but also for the message it presented to the public regarding the racial injustice that MLK had to endure.

“For such a large statue, dismembering MLK and Coretta Scott King is... a choice. A deliberate one,” Attiah said in an article. “Boston's ‘Embrace’ statue perfectly represents how White America loves to butcher MLK. Cherry-picking quotes about love and violence. At the same time, ignoring his radicalism, anti-capitalism, his fierce critiques of white moderates. MLK in his fullness-- is still too much for them."

Therefore, other individuals have expressed their discontent with the statute on social media with the postings that can be found below. 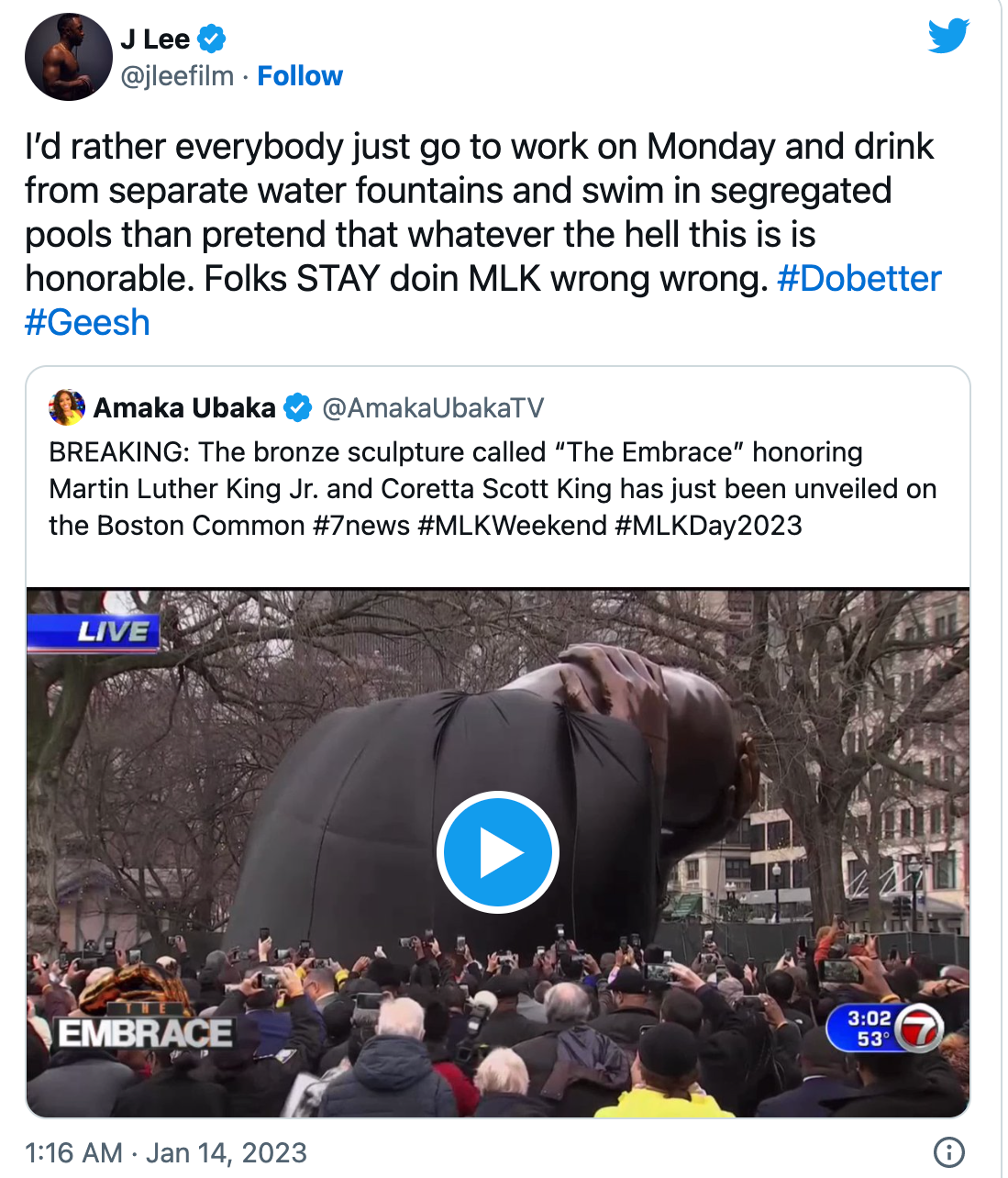 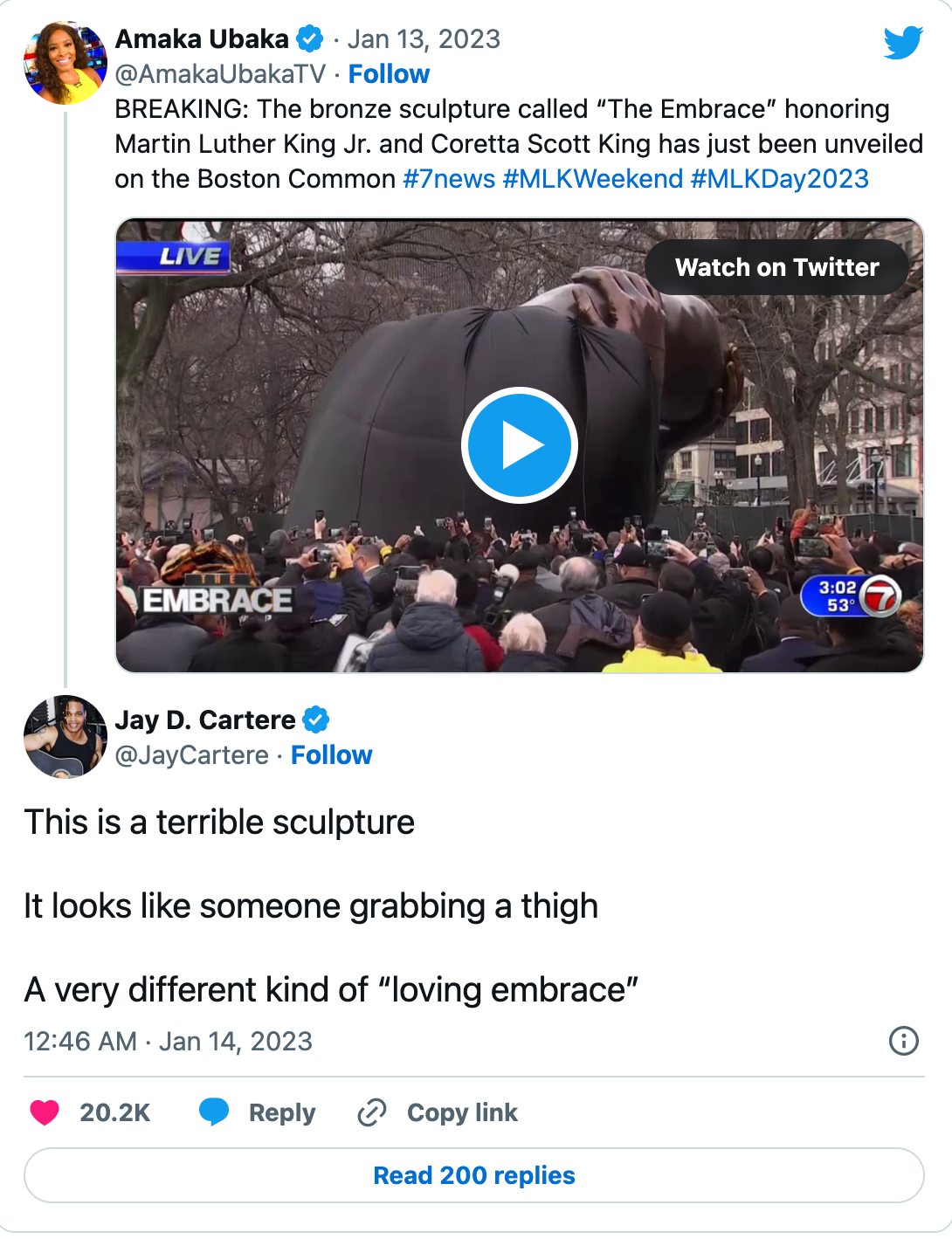 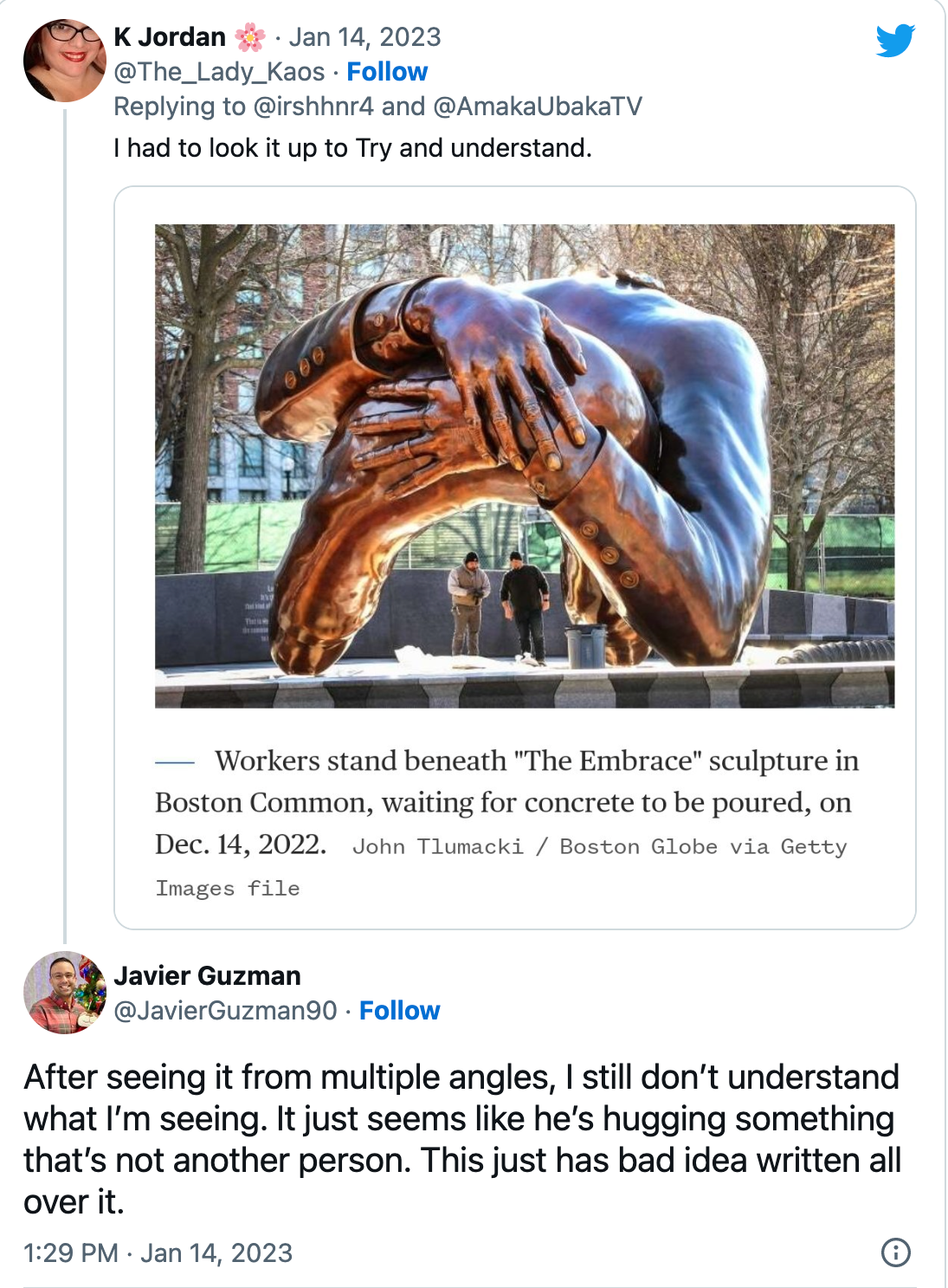 On the other hand, the sculpture has also generated positive responses. Martin Luther King III, the eldest son of Dr. Martin Luther King Jr. and Coretta Scott King, defended the monument when he spoke to CNN’s Don Lemon on Monday, saying he thought “the artist did a great job.”

"I'm satisfied," King III said. "Yeah, it didn't have my mom and dad's images, but it represents something that brings people together. And in this day and age, when there's so much division, we need symbols that talk about bringing us together."

In addition, King III also expressed his appreciation that the sculpture featured the relationship between his parents. “Many monuments are done just around dad,” he said. “But it represents the kind of relationship they had working together, and they were a partnership."

Furthermore, Michelle Wu, the mayor of Boston, expressed enthusiasm about the statue to the Boston Globe on Saturday, claiming that the sculpture allows everyone to “open our eyes to the injustice of racism and bring more people into the movement for equity.”

Brooklyn-based conceptual artist Hank Wills Thomas alongside the MASS Design Group created the art piece. Thomas’ work was announced as a finalist in 2018 by the MLK Boston art committee in a set of proposals for the MLK memorial on Boston Common.

According to Thomas, the goal was to capture the feeling of love in the King’s relationship. He also noted that the embrace emphasized spiritual and emotional protection between the two.

The Statue is where Dr. Martin Luther King Jr. and Coretta Scott King met in 1951 and began dating as he began his doctoral studies at Boston University while she was studying at the New England Conservatory of Music.

“The Embrace” is part of the 1965 Freedom Rally Memorial Plaza, where local and national civil rights leaders are honored. It is also where MLK led a rally on Apr. 23, 1965, where marchers walked from Roxbury, one of Boston’s predominantly black neighborhoods, to the Common, known as the oldest public park in the United States.

In sum, the statue’s reveal has created controversy among the people that stems from praise to ridicule. People have taken their opinions to the public and it has only become a source of news.   It is unknown what will happen to the monument in response to the public outbursts as people have already advised to “burn it down,” but it is known that the piece is only made to capture further the essence of what Dr. Martin Luther King Jr. Day entails every year.

Yolanda Renee King, the granddaughter of Dr. Martin Luther King Jr. and Coretta Scott King, emphasizes that we are all called to continue what the Kings have started amid disapproval for a memorial.