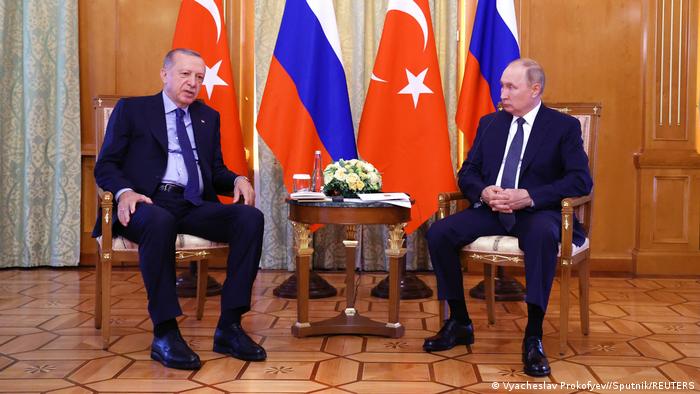 The President of the Russian Federation, Vladimir Putin, met last Friday in Sochi with the Turkish President, Recep Tayyip Erdogan. The meeting acquires importance as Turkey is currently involved in reducing the international tension caused by the war in Ukraine.

Lately, Turkish involvement has mainly concerned Ankara's engagement in the Ukraine grain issue. Accordingly, last week, Turkey managed to broker a deal with the UN to resume grain exports by establishing a Joint Coordination Center (JCC). Thanks to this timely intervention, the first ship loaded with grain managed to leave Ukraine through Turkish waters, with Lebanon as its destination.

Moreover, Turkey has not joined the Western countries' numerous sanctions packages, which makes the country a desirable economic partner for Russia since the Western embargo has severely hit its economy.

The two leaders, who met again just a few weeks after the trilateral meeting in Tehran, held talks in Sochi in the Green Hall of the Imperial Building of the Rus health resort. As announced by the Kremlin spokesman, Dmitry Peskov, the talks would mainly focus on issues concerning both bilateral cooperation and international matters.

As a result, it is not surprising that the two agreed on ruble payments for Russian gas imported by Turkey, which will amount to 45% of the total amount of the latter's natural gas imports by 2021.

The Russian Deputy Prime Minister, Alexander Novak, who announced this on Friday, said that this is the first important step towards establishing financial solid and monetary relations between the two countries. This acquires relevance since, as it is well-known, payments in rubles were the condition sine qua non imposed by Russia on the EU countries to continue to buy gas supplies.

The Russian President praised Turkey's position by commenting on the exceptional work done through TurkStream. This pipeline was completed thanks to the cooperation between Russia and Turkey, connects the two countries, and provides Turkey with Russian natural gas. Vladimir Putin, during the meeting, said that the pipeline "Does not only ship natural gas to Turkey, but also transfers our gas to Europe and consumers. Europe should be grateful to Turkey for the uninterrupted flow of natural gas from Russia."

Therefore, this move, combined with the active role undertaken in the grain issue, puts Turkey in an even more favorable position. The country is currently one of the few states acting as a point of connection between Russia and the outside world.

On this point, some analysts expressed their opinion. As reported by Al Jazeera, Eyup Ersoy, visiting research fellow at the Institute of Middle Eastern Studies, King’s College London, stated that “By its role in the grain deal, Turkey has succeeded in positioning itself as Russia’s diplomatic conduit to the international community.”

Furthermore, he stressed the positive repercussions that the new role assumed by Turkey may yield, “This diplomatic rearrangement has shifted the relational asymmetry more in Turkey’s favor and is expected to curtail, to some degree, Russian resistance against Turkish policies and initiatives in issues of common concern.”

Regarding the two countries' international cooperation, one of the hottest topics the two leaders discussed was the Syrian issue. This is important for Turkey as the country is still engaged in the suppression of terrorist activities carried out by the Syrian Democratic Forces (SDF), which Ankara defines as a terrorist organization due to its affiliation with the Kurdistan Workers Party (PKK).

Accordingly, Erdogan focused again his attention on the need for future new operations in northern Syria, an intention he also expressed in May. Moreover, he confirmed this intent during the recent meeting in Tehran, where he said that “We are determined to eradicate the evil groups that target our national security from Syria.”

Subsequently, Russian support would be of the essence as Moscow currently controls the northern Syrian air space. Ankara is, therefore, asking for Russian acquiescence on the possibility of new operations in that area. This robust partnership on the Syrian issue would also contribute to strengthening further the two countries' ties.

As Anadolu Agency, the two leaders confirmed their importance in protecting Syria's political unity and territorial integrity. Consequently, they reaffirmed their determination to act in solidarity and coordination in the fight against all terrorist organizations in Syria.

Moreover, the agency reported talks concerning the Libyan issue as well. They remain committed to protecting Libya's sovereignty, territorial integrity, and national unity. Furthermore, they emphasized the importance of holding free, fair, and credible elections based on the broadest possible consensus among Libyans.

Nevertheless, there are widespread fears in the West that this meeting will pave the way for Russia to circumvent EU sanctions by using Turkey's support.

The Guardian's newspaper reports on the fears that Ukraine expressed in a report issued by the government that Putin may aim to promote Russian investments in the Turkish oil industry to mask the origin of Russian oil exports before the planned EU embargo enters into force.

Besides, the report allegedly refers to the fact that Russia is seeking cooperation with Turkish banks to help its banks circumvent the problems arising from Western sanctions.

Despite Moscow's denials, the Ukrainian government and the West remain concerned that Russia may continue to conduct business through Turkey. This, in turn, would help the Kremlin get the necessary income to invest in the ongoing war in Ukraine.