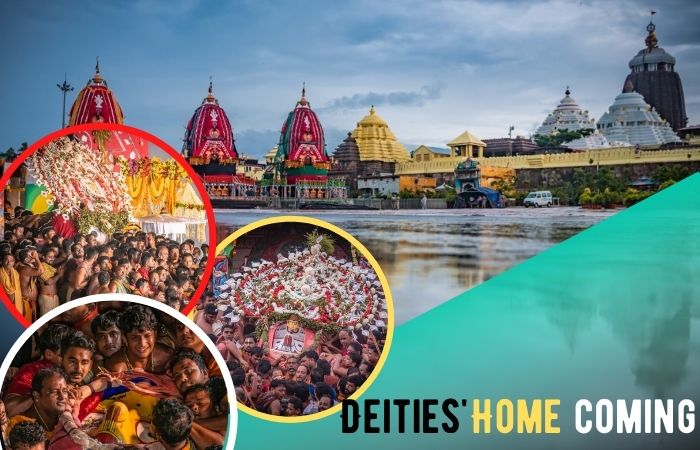 Puri, Odisha:  Everybody must have heard of Ratha Yatra, the famous car festival of the temple town of Puri in the state of Odisha. But have you heard of Niladri Bije? Ratha Yatra is not a single-day festival. It is popularly called the ‘Naba Dinatmaka Yatra’ or the nine-day festival starting on the day of Ratha Yatra when the trinity comes out of the Srimandir, their Puri abode, and go on a 7-day annual sojourn to their garden house Sri Gundicha temple and return, which culminates with the grand celebration of Niladri Bije on the 12th day.

This year it was observed on 23 July, Friday under subdued fanfare and strict restrictions by the govt. in view of the ongoing Covid pandemic.

Celebrated on the Ashadha Trayodashi, Niladri Bije is the concluding day of the 12 days long Ratha Yatra festival of the divine trinity of Jagannath Puri, Odisha.  On this auspicious festival, the Lords re-enter the sanctum sanctorum of the temple after returning from their aunt’s place. The word ‘Niladri Bije’ literally means ‘re-entering the temple, ‘Niladri or Nilachala’ is another name of the famed Puri temple and ‘Bije’ means ‘to enter’ in Odia language. The day sees a series of interesting rituals performed by the Lords before finally ascending their divine seat called ‘Ratna Singhasana’ or ‘Ratna Bedi’ (bejewelled platform).

The day starts with the usual rituals of Arati and Bhog offering to the deities on their respective chariots. Then the entering of the deities begins in a ‘Goti Pahandi’ procession in which the next deity leaves only after the former deity has reached its destination.

In the long process, all the deities enter the Srimandir and finally, Lord Jagannath starts his expedition. During this period an infuriated Goddess Mahalakshmi closes the doors of the temple barring her husband’s entrance.

She is said to be angry as the sibling trio had gone on the Ratha Yatra, the divine vacation to their aunt’s place without taking her along. She out of courtesy allows other deities to enter but blocks Lord Jagannath’s entry.

Then ensues the ‘Lakshmi Nayarayan Kali’ (quarrel) yet again. This is a continuation of the quarrel which is played out on multiple occasions throughout the festival. This divine play of domestic argument is called ‘Lakshmi Narayana Bachanika’ which is done in public view. It concludes after an anguished Goddess Lakshmi is pacified only after Lord Jagannath confesses his mistake and offers her ‘Rasagola’ among other things. After a long conversation, Mahalakshmi finally gets convinced and agrees to let him in.

The Jaya-Vijaya doors of the Singhdwara (Lion’s gate; main eastern entrance) are then opened and Lord Jagannath finally enters the temple, drawing curtains on the grand annual event.

Inside the temple premises, after the pacification, the divine couple is made to sit next to each other where a traditional ritual of reunion is rehearsed, and then Jagannath ascends his throne “Ratna Bedi’ and rejoins his siblings, elder brother Balabhadra and younger sister Subhadra. 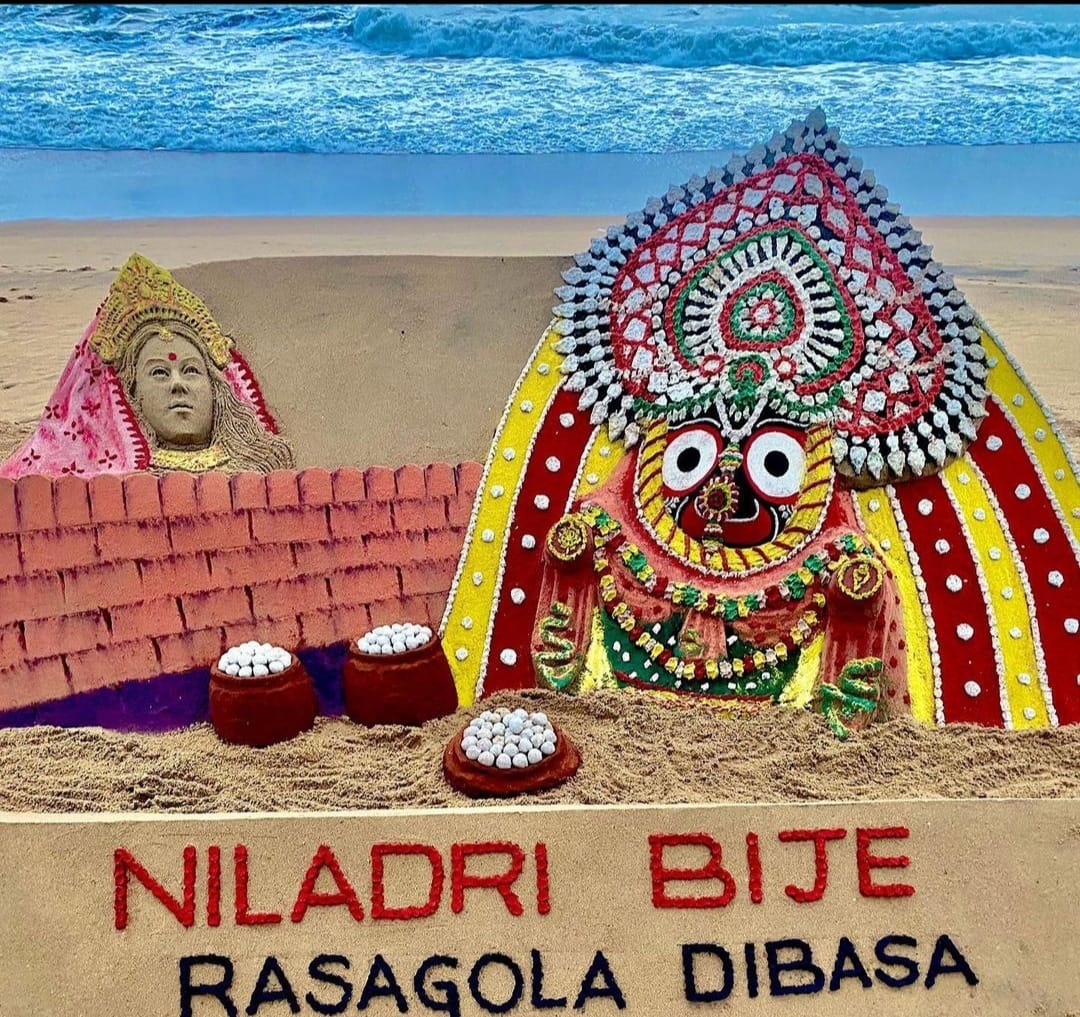 Noted Puri-based sand artiste Sudarsan Pattnaik shared his interpretation of the event by sculpting a beautiful sand art. He took to Twitter with a photo of his creative masterpiece and captioned it with: “On the pious occasion of NiladriBije, Mahaprabhu Jagannath while returning to Ratna Singhasana, offers Rasagola to #MahaLakshmi. My sand art for this unique ritual. #RasagolaDibasa #JaiJagannatha”

This day is also observed as ‘Rasagola Dibas’ by Odias around the world. It is believed that since the day of the first celebration of Ratha Yatra centuries ago, ‘Rasagola’, or ‘Kheera Mohana’ as it was formerly called, was invented as a special treat to pacify Goddess Lakshmi.

Rasagola is a distinct melts-in-your-mouth Odia sweet made out of curd cheese. As a tribute to the divine sweet which re-establishes peace between the God and Goddess, this day is celebrated as #RasagolaDibasa as a commemoration and to re-affirm its Odia identity since millennia. In general ecstasy among the public at the return of Lords, huge amounts of Rasagolas were offered onboard the chariots.  However, due to Covid's restriction on public entry this year, Rasagola offerings were limited to only servitors, participating sadhus of various mutts, and personnel present on duty.

As usual, the temple town of Puri was adorned beautifully during the festival. But unlike other years, the entire festival was observed virtually by devotees across the world as no physical presence was allowed. The festival was as usual telecasted live for the darshan.

On Friday, 23 July the final homecoming rituals of the deities, Niladri Bije was observed. It started early in the morning with the servitors performing Mangala Alati, Mailum, Tadaplagi, Abakasha before the Gopal Bhog was offered.

Madhyana Dhupa was offered at the noon. As per schedule Bahuda Pahandi began between 4 to 5 pm. First, the idols of Madan Mohan and Rama Krushna were taken inside the Srimandir. They were followed by Sudarshan, Lord Balabhadra, and Devi Subhadra who were taken inside in the Goti Pahandi procession and established in the sanctum by the Daitapati servitors.

Lord Jagannath was the last to enter the sanctum sanctorum at 9 pm. Before entering the main temple, the traditional act of Lakshmi-Narayan Bheta (meeting of Jagannath and Mahalakshmi), the subsequent arguments, and offering of Rasagola, etc was performed at around 7:30 pm.

It was performed as usual between the servitors of Lord Jagannath and Devi Lakshmi at the main gate of the temple. According to reports late at night, Jagannath was also enthroned on the Ratna Singhasan along with his holy siblings.

Before going to bed, they were served Pakhala (fermented water rice) as supper, which is not for public sale.

After establishing the deities in the Garbha Gruha (sanctum sanctorum), the Daitapati servitors left the temple at night. Notably, Daitapatis are a special class of servitors who perform every rite only during a month, starting from Snana Yatra (bathing ceremony) up to the Niladri Bije.

Reportedly, over 10,000 servitors, temple officials, police personnel, and journalists were tested for the Covid-19 test in four phases. Only those who were diagnosed with Covid negative were allowed to participate in the festival.

The administration had created a bio-bubble for every ritual involved in the festival. According to reports, as many as 65 platoons of the police force and 500 officers of various ranks were posted for the mega event.

There was the imposition of curfew on the entire Bada Danda stretch and the rest of the town was clamped with Section 144. All roads leading to Puri including the lanes connecting Bada Danda were sealed. The Grand Road was put under CCTV surveillance and the festival proceedings were closely watched by drone cameras.

During the festival, Singhadwar police booked at least 20 persons for violating the curfew and entering the Ratha cordon. A hotel was also sealed for violating Covid norms and allowing devotees to watch the festival from their rooftop.

From Saturday onwards, the regular rituals would resume in the temple with the offering of cooked bhoga to the deities. The prasad on the first day after Trinity’s return to Srimandir is popularly known as Nilachala Abadha. The Abhada (Mahaprasad consisting of rice and other dishes) makes prominence, as the deities will be offered rice and pulses with varieties of curries for the first time after returning from the Rath Yatra.

The deities are usually offered fruits, milk, and dry foods without rice dishes during their stay on the chariots. After the Bahuda yatra, this is also the tasting of home-cooked cuisines in the Srimandir after long.

Since the temple will remain closed for devotees, the administration in consultation with Suar and Mahasuar nijog has arranged to distribute abadha at the South and West gates of Srimandir.

Some of the important celebrations in the 12-day grand festival – It is the revered world-famous Chariot festival that is celebrated throughout the globe. It is the first day and the start of the 12-day annual event. On this day the celebrated primary Lords, the sibling trio, and other subsidiary deities are taken for a 7 days trip to their birthplace and garden retreat Shri Gundicha temple. 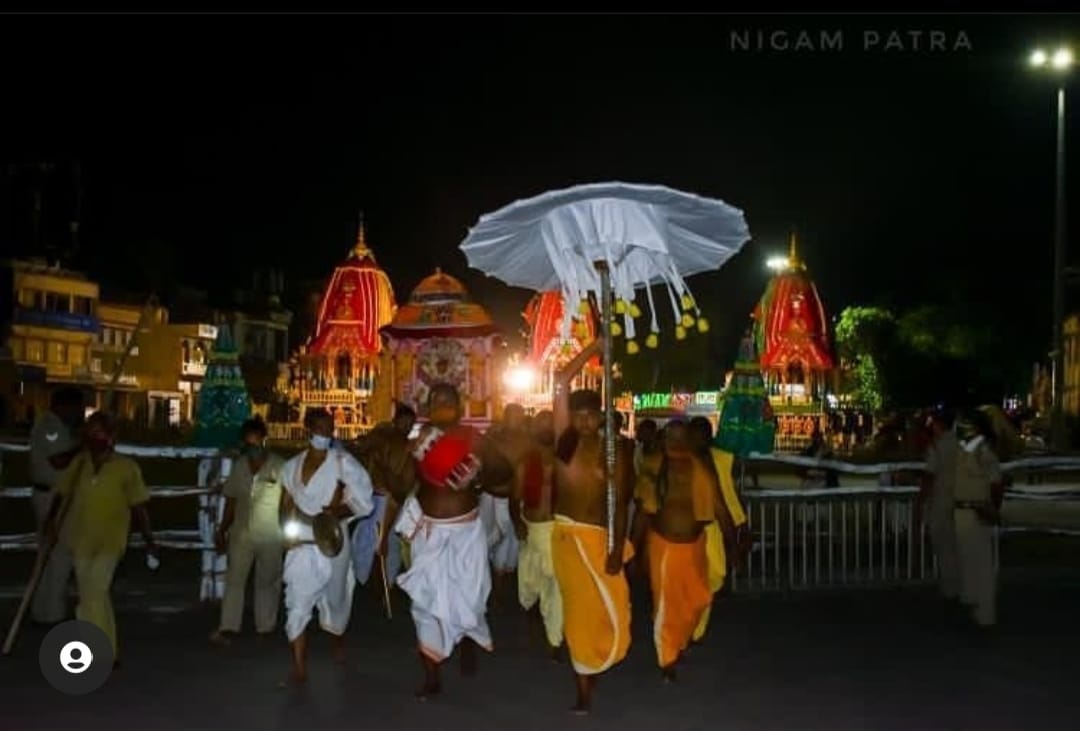 On the fifth day, an aggrieved Mahalakshmi, the consort of Jagannath comes to visit Gundicha temple. She is not allowed in, so in rage, she breaks a part of Nandighosh, Jagannath’s chariot parked outside, and returns to Srimandir with a vow to teach him a lesson. This is the return festival of the Lords. After their 7-day long pleasure trip, they return to their temple on the 9th day. But after returning, they don’t immediately enter the temple but remain on their respective chariots for three more days to allow their public darshan by the devotees who descend on the temple town in large numbers from everywhere. Suna Besha translates to the ‘Golden attire’. On this day, the sibling deities are adorned in huge amounts of gold and bejewelled ornaments. It signifies that the Lords are refreshed after their trip and the gold signifies security and stability of the Odia race as their Lords are shown in elegance and opulence. This is a strange ritual in which the deities are offered Pana, a special aromatic herbal drink, to alleviate any tiredness from the journey. At the end of the offering and arati, the huge vats containing pana are broken on the chariots which flows all over. This overflowing pana is believed to be the offering for the subsidiary deities stationed around the chariot just below the main platform. Devotees also enthusiastically collect the overflowing pana as divine prasad.

Thus, amid the deadly novel coronavirus pandemic too, this year’s grand car festival of Puri town comes to a close. It had commenced this year amid strict COVID protocol on July 12. Devotees were not allowed inside the temple premises, nor during the course of the entire festival to avoid any further outbreak or surge in virus infection. For the second consecutive year, Rath Yatra was organised without the participation of devotees and in strict adherence to the SOPs issued by the State government.