Nirmala Sitharaman Purchases Veggies At A Small Market In Chennai. 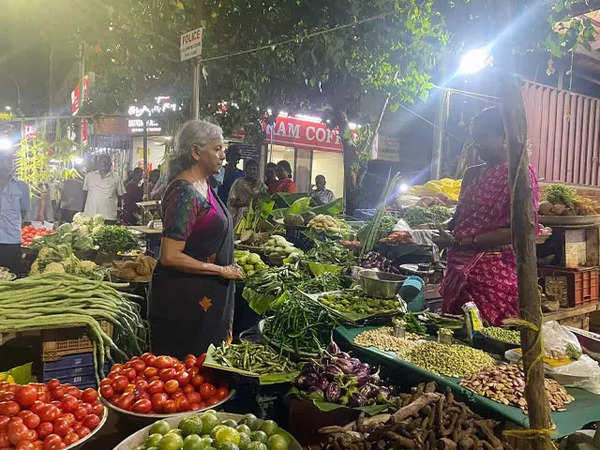 On Saturday night, Union Finance Minister Nirmala Sitharaman paid a surprise VIP visit to the vegetable traders on South Mada Street in Mylapore. Before heading to New Delhi, she went grocery shopping for veggies and greens.

During her day-long visit to Chennai, Smt. @nsitharaman stopped at the Mylapore market, where she spoke with the vendors and locals and bought vegetables, according to a tweet from her official account.

When the thandu keerai she was looking for wasn't available, Ms. Sitharaman bought other greens, according to BJP MLA Vanathi Srinivasan, who was with the Union Minister.

"At first, the sellers were frightened to look at the security guards carrying guns. But after we identified her, the women got over their apprehension and even extended an invitation for her to join them for coffee at a nearby hotel." However, she added that she could only stay for 20 minutes since she needed to catch a flight home.

While traveling to Ms. Srinivasan's house, she stopped at the market. She said that Ms. Sitharaman was familiar with the area because she spent her childhood summers there. She took selfies and talked to the locals in the produce market.

At Kallikuppam in Ambattur earlier in the day, the Minister opened the multidisciplinary Ananda Karuna Vidhyalayam for kids with special needs.

A tweet from her office claims that Sitharaman also addressed the crowd gathered for the event.

One Twitter user wrote, "What an Earth approach by Madam FINANCE MINISTER. I don't think any FM has ever purchased vegetables from vegetable vendors directly. It certainly gives the feeling that we are in safe hands (sic)."

Production is one of the primary commodities at the heart of the nation's escalating inflation. She took selfies and talked to the locals in the produce market.

Nirmala Sitharaman, the finance minister, had earlier stated that the government was working to maintain inflation under 4% and that measures were being taken to guarantee that people get necessities at reasonable prices and on time.