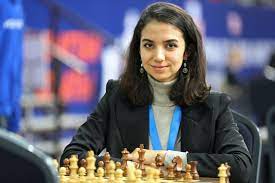 Iran Anti-Hijab Protests: On 27 December in Dubai, photos of Sara Khadem playing without a hijab were posted from the event by the International Chess Federation.

Sara Khadem and Atousa Pourkashiyan, playing in the FIDE World Rapid and Blitz Chess Championships in Almaty, Kazakhstan, have followed other Iranian sportswomen in abandoning the headscarf.

Photographs published on the International Chess Federation's Flickr feed show them with their hair showing and deep in concentration as they focus on a game.

Under Iran's strict dress code, women must wear a hijab. This comes amid ongoing protests in Iran following 22-year-old Mahsa Amini, who died in police custody after being detained for "inappropriate attire"- not wearing her hijab correctly.

Iran has been, by demonstrations against the country's clerical leadership since mid-September, when the 22-year-old Iranian Kurdish woman, Mahsa Amini, died in the custody of morality police who detained her for "inappropriate attire."

Women have played a prominent role in the protests, removing and sometimes burning their headscarves.

In October, Iranian climber Elnaz Rekabi competed in South Korea without a headscarf, later saying she had done so unintentionally.

Photos of Sara Khadem playing without a hijab were posted from the event by the International Chess Federation and other players. Sara Khadem could be seen looking down at the chessboard with her hair loose around her shoulders

Photos posted by both outlets appeared to show her with no headscarf during the tournament. Khabarvarzeshi also posted a photo of her wearing a headscarf but without saying if it was taken at the same event.

Ahead of Iran's first match in the Qatar World Cup recently, defender Ehsan Hajsafi spoke in apparent support of anti-government protesters at home.

"We have to accept the conditions in our country are not right, and our people are not happy. We are here but it does not mean we should not be their voice or we should not respect them."