Not only Pakistan, China, America and Russia are also supporting the Taliban. 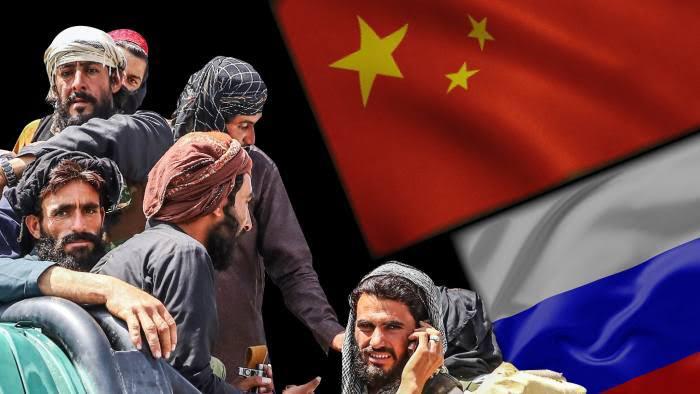 The World is well aware of the terror happening in Afghanistan. Taliban has returned to power after 20 years. The situation in Afghanistan is serious. Everything that happened in few days was unpredictable. It is undoubtedly a failure of the United States in its fight against the Taliban and a shameful manner of abandoning Afghanistan.

The return of the Taliban has also stoked fears in public. Everything goes out of control. Afghanistan's president has also resigned from his post and left the country.

People are begging for help from other countries. No one is coming forward to support and help Afghanistan.

Pakistan appeared the most exuberant in welcoming the Taliban's rule in Afghanistan. Because they think they will enjoy more influence and leverage in Kabul under Taliban rule.

Imran khan has personal and political reasons to celebrate the fall of Afghanistan. Without the support and shelter of Pakistan Taliban might not be ruling in Kabul right now.

Pakistan wasn't doing it for them. It was their strategy to help the Taliban because of the long fears concerning Afghanistan. These fears were of Afghan alliance with India and Afghan support for rebellion inside Pakistan and are reduced by Taliban victory. Pakistan has had a strong alliance with China for the past 20 years that gives them hope that Chinese investments in Afghanistan may help to keep the Taliban government aligned with Pakistani interests. Pakistani is confident about the positive consequences of the Taliban's victory.

Another Pakistani reason for helping the Afghan Taliban was to make sure that they don't support the Pashtun Islamist rebellion against Pakistan. Pakistan's confidence is increased by the appearance of a common enemy of Pakistan, the Afghan Taliban. Not only Pakistan but some other countries are also coming forward to support the Taliban's rule in Afghanistan.

The neighboring country, which refused to recognize the rule of the Taliban when it took over Afghanistan for the first time in 1996, was among the first ones to open doors for the extremists when they starting making territorial gains in the war-torn country amid the withdrawal of the US forces. The Taliban has said it sees China as a "friend" of Afghanistan and assured Beijing that it would not host Uyghur Islamic militants from the volatile Xinjiang province, which is a major worry for the Chinese government. China says that they are ready to move ahead in its relations with the Taliban. It is been said that America's withdrawal from Afghanistan will impact China's regional and global standing.

China’s remarkable shift was on display little more towards the end of July, when its Foreign Minister Wang Yi welcomed a Taliban delegation to the northern port of Tianjin as the group made gains against the administration of President Ashraf Ghani, who fled the country on Sunday. Wang's endorsement of the Taliban's "important role" in governing Afghanistan provided a crucial boost of legitimacy for an organization that has long been a global pariah due to its support of terrorism and the repression of women. Beijing is concerned that under Taliban rule, Afghanistan will become a hub for the East Turkistan Islamic Movement (ETIM), a separatist outfit aligned to Al-Qaeda which is waging an insurgency in Xinjiang.

Russia's ambassador to Afghanistan on Monday praised the Taliban's conduct and said the group, still officially designated a terrorist organization in Russia, had made Kabul safer in the first 24 hours than it had been under the previous authorities. The comments by Ambassador Dmitry Zhirnov reflect an undisguised effort by Russia to deepen its well-established ties with the Taliban. While many countries are scrambling to empty their embassies and remove their staff from Afghanistan, Russia is staying put -- it has long prepared for the arrival of the Taliban in Kabul. The Kremlin wants to protect its interests in Central Asia, where it has several military bases, and is keen to avoid instability and potential terrorism spreading through a region on its doorstep. A Russian foreign ministry statement Monday said the situation in Kabul "is stabilizing" and claimed that the Taliban had started to "restore public order".

The terrorists had assured the Russians that "not a single hair will fall from the heads" of their diplomats, he said. Russia wanted Afghanistan to have peaceful relations with "all the countries in the world" and that "the Taliban had already promised us" this.

But Russia's foreign ministry has suggested it will not rush into a close relationship with a Taliban government, saying it would monitor the group's conduct before deciding on recognition.

And as the Taliban advanced through Afghanistan this summer, Russia staged war games with allies Uzbekistan and Tajikistan on the Afghan border in a show of force. Russia's dialogue with the Taliban is the fruit of several years of courting. Foreign Minister Sergei Lavrov in July described the Taliban as a "powerful force", and blamed the Afghan government for faltering progress in talks. "It is not for nothing that we have been establishing contacts with the Taliban movement for the last seven years," the Kremlin's Afghanistan envoy, Zamir Kabulov, told the Ekho Moskvy radio station on Monday. This relationship has raised many eyebrows, given that the Taliban has its roots in the anti-Soviet Mujahideen movement from the 1980s.

But Alexander Baunov of the Carnegie Moscow Center said Russia now believed the Taliban have changed since the last time it was in power in the 1990s when it gave shelter to Al-Qaeda.

The US is fully withdrawing from Afghanistan, leaving the country after 20 years of war and more than 100,000 lives lost between Afghan civilians, military, coalition troops, and militant fighters. In the wake of the pull-out, critics from both sides of the political aisle have criticized Joe Biden's decision to end the US's presence in the country. Mr. Biden has been accused of abandoning the women and girls of Afghanistan, who will likely have their rights repressed under the renewed Taliban. Others have complained that the president did not commit to a nation-building project in Afghanistan, even though 20 years of investment and trillions of dollars have yielded nothing resembling a transformed and self-sustaining democracy in the country. The US exit from Afghanistan and the Taliban's return to power has caught US intelligence officials and the public at large by surprise. However, the US has been in the process – to varying degrees of success – of leaving the country for the past decade. Despite being a popular war in the US in the wake of the September 11th terrorist attacks, the American public cooled on it, seeing little return on their continued investment in a conflict with no clear end in sight.

For many Americans, the emotional investment in the US war in Afghanistan began to fade after the leader of the Al-Qaeda terrorist organization and mastermind of the September 11th attacks, Osama Bin Laden, was killed in 2011. Three years later, then-President Barack Obama announced the beginning of troop drawdowns in the country, proposing that US forces would be fully removed by 2016. During that time, US forces were tasked with training the military of Afghanistan's US-backed government to defend the country after they left.

However, corruption in the Afghan government and hurdles in establishing a unified and capable military caused US officials to pull back from the 2016 deadline.

Former President Donald Trump campaigned on ending the war in Afghanistan but was talked down by US military officials who feared that the government would fold to Taliban forces without US involvement. While Mr. Trump ultimately took that advice, in 2020 he held negotiations with the Taliban to pull out of the country by 1 May 2021 and agreed to release 5,000 Taliban prisoners. In exchange, the Taliban agreed not to attack Americans while they were evacuating and to begin peace talks with the Afghan government. Those talks eventually fell apart. The Taliban did not adhere to its end of the deal, and neither did Mr. Biden adhere to Mr. Trump's deal after he took office in 2021. Even if Americans supported further involvement in Afghanistan, there was no indication that further investment would result in a stable democracy with the capability to defend itself from the Taliban.