A monumental corruption scandal is gradually unfolding in Odisha with the arrest of prime accused, Biranchi Narayan Sahoo, a former Odisha Staff Selection Commission (OSSC) official. There is widespread agitation by candidates who accuse their jobs have been jeopardized by the rampant corruption in the Commission. The arrest of a mere class III personal secretary with massive money laundering is a testament to a big nexus at play.

How did the case start?

In the later part of July 2021, the anti-corruption Odisha Vigilance Department got a tip about huge disproportionate assets with an OSSC official. Vigilance detectives included three teams comprising 4 DSPs, 13 Inspectors, and other staffers mounted the raids after receiving the complaint. They simultaneously raided six places in Bhubaneswar and Cuttack related to Biranchi Narayan Sahoo, against whom the complaint was registered.

Who is Biranchi Narayan Sahoo?

Biranchi Narayan Sahoo is a resident of the Kolathia area of state capital Bhubaneswar. He worked as a private secretary to a member of the Odisha Staff Selection Commission (OSSC). According to sources, he is currently 58 years and has worked with the OSSC since its inception in 1994. He was due to retire in 6 months after completing his service tenure of almost 26 years. It is at this fag end of his career that the law finally caught up with him for allegedly amassing the ill-gotten assets far out of proportion of his known sources of income. It was found that his wife, Sudhanshu Bala Sahoo and brother-in-law Manoranjan Sahoo have also colluded with him in this heinous crime.

The developments so far –

After the anonymous tip against the OSSC official and the anti-corruption vigilance sleuths raiding multiple properties of Biranchi Kumar Sahoo, he was nabbed with a huge haul of assets far exceeding his known sources of income.

Reportedly the property recovered so far are estimated to be worth ₹ 3.79 crore, which includes 1.5 kg gold worth over ₹ 60 lakh and ₹ 12 lakh hard cash found in his direct possession. Further, two double-storey buildings at Niladri Vihar and Bhubaneswar, two single-storey buildings at Bhakti Vihar, Bhubaneswar and Godibandha, Cuttack, 14 plots in Bhubaneswar, Khurda and Puri, a four-wheeler, insurance deposits worth over ₹ 56 lakh were also traced. On further suspicion, his relative’s houses were searched, and another ₹ 13 lakh was unearthed from his brother-in-law’s residence. 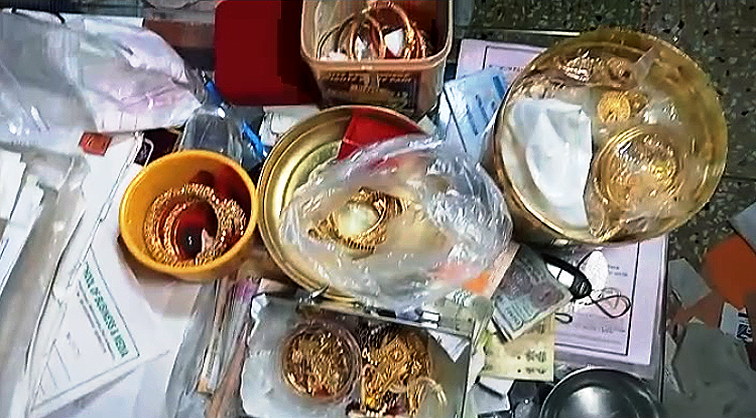 The Vigilance department informed that cumulatively the movable and immovable assets traced in the searches amounted to around ₹ 3.51 crores, which is 268 per cent of his known sources of income. It is noteworthy that his wife, an insurance agent, alone embarked on five foreign trips apart from the other five foreign family vacations they have had together over the years.

Apart from this, they also recovered bank slips indicating huge cash deposits in several bank accounts from the possession of Sahoo. Further searches and verifications are still underway, an official informed.

It is widely concluded that Biranchi Sahoo ran well-planned money for job racket. The vigilance department got hold of numerous recruitment-related job applicants to admit cards on his phone and house alongside many other incriminating vital documents prompting them to investigate if he had access to candidates selected for Group B and Group C posts.

The seized mobile phone also contains the numbers of several candidates who have been recruited and appointed in several departments in the past decade. It clearly shows the extent to which Sahoo had abused his position in the OSSC. It is now being ascertained if he had contacted the successful ones by saying that they had not cleared the examinations and that he could fix it for them. The successful candidate’s identity has not been revealed, but they are being tracked to know the truth further. Vigilance officials are also trying to retrieve call details and delete Whatsapp chats of Sahoo. 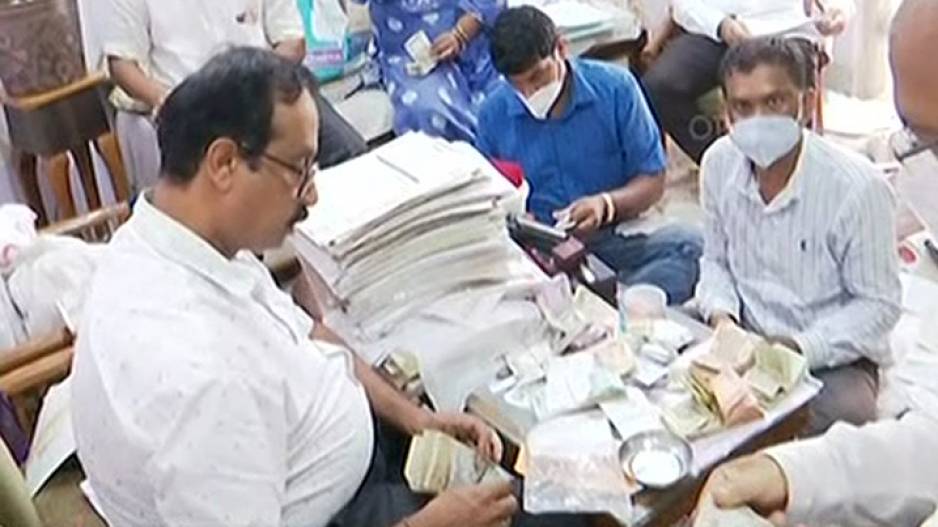 “Since there has been no formal complaint of corruption from candidates who did not clear the tests over the years, we assume he may have conned successful candidates,” said the insider source.

Actions are taken on him –

A case was immediately registered in this connection under sections of the Prevention of Corruption Act. He was arrested on 31st July and taken into judicial custody in the DA case. He was lodged in jail for 14 days for further questioning after the Special Vigilance Court rejected his bail application. Additionally, Vigilance SP R Prakash informed that a case had been registered against his wife and brother-in-law. The duo was booked for allegedly conniving and helping Sahoo in amassing and hiding the unaccounted cash.

As the immediate fall-out, Biranchi Sahoo was suspended with immediate effect by OSSC Chairman Nirmal Chandra Mishra. The OSSC additionally suggested the State government take rigorous action against Sahoo. Meanwhile, taking exemplary action against the accused, the State government ordered for compulsory retirement of Sahoo just hours after his suspension from OSSC.

After the vigilance trap, Biranchi came under the Enforcement Directorate (ED) scanner. The ED has registered a case under the Prevention of Money Laundering Act and started probing the alleged involvement of Sahoo in the money laundering case.

Biranchi Sahoo has currently lodged in the Central Jail at Jharapada in Bhubaneswar. The anti-corruption wing has sought permission from the Special Vigilance Court’s to take him on remand for even more interrogation.

The arrest of the former OSSC official has brought to the limelight the shady working of a government department in recruiting candidates over such a long period. The extraordinary revelations and the staggering money involved have raised many questions and even more suspicions. The fact that such an opulent lifestyle and inflating wealth of an employee did not catch the attention of the recruitment agency all these years has also raised several eyebrows. For a panel that dealt with the recruitment of hundreds of candidates into government jobs, it simply doesn’t seem possible that they would have overlooked his making a fortune out of his government job. It can be easily predicted that he couldn’t have done this all alone right under the nose of the authorities but had a well-functioning deep-rooted nexus that has not been discovered.

“It’s surprising that Biranchi was making such obscene amount of money to own assets, but no one noticed. If the accumulated such wealth by abusing his position at OSSC, it is not possible to evade attention,” said an investigator.

The discovery of admit cards and other documents related to job applicants from his house spanning a significant period establishes that Sahoo had been in this game for a long time. It also begs the need for a thorough search of others in the OSSC, who definitely must have been hand-in-gloves with him.

Senior BJP leader Bijoy Mohapatra, as a voice of the state opposition party, showed concern for the candidates and squarely blamed the state government for playing with the future of the job aspirants. Such a large-scale DA case against a personal secretary proves that the entire OSSC has turned corrupt. All of its members should come under the purview of investigation. Addressing a press meet, the former Minister apprehended that as time passes, Commission higher-ups might indulge in preparing documents to cancel evidence of their corrupt practices.

National Students’ Union of India (NSUI) activists led by State president Yashir Nawaz gheraoed the OSSC office in Bhubaneswar. They demanded fair and transparent investigation through a judicial probe into the alleged job scam. About 70 protestors were arrested as a preventive measure and later released. 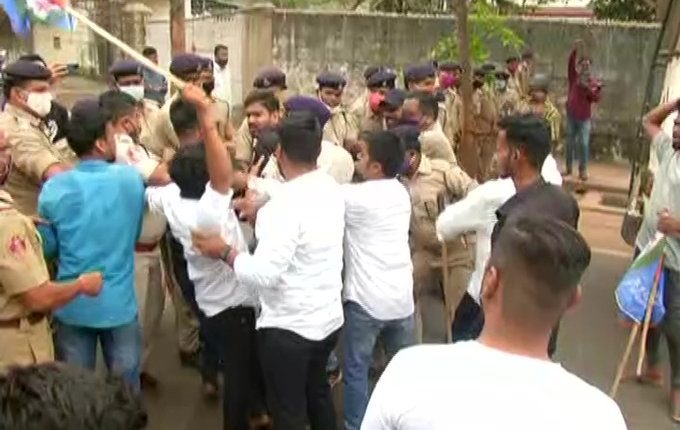 Hundreds of activists of Odisha Pradesh Chhatra Congress (Student’s wing of Congress party) allegedly scuffled with the police while trying to barge into the commission with anger and protested. They demanded a thorough probe into the bribe for the recruitment scandal. The activists claimed Sahu’s arrest was testimony to the unscrupulous practices in the Commission. “The arrest of the private secretary is not enough as all OSSC staffers from top to bottom are neck-deep in corruption. We demand that the State Vigilance must question all staffers,” they pointed out.

While questions were raised on the involvement of the OSSC in the widespread job scam thus unearthed, OSSC chairman Nirmal Chandra Mishra issued a clarification saying that the Commission has not yet received any complaint of a job scam. So, there was no question of an internal inquiry into the matter.

The arrest of Sahoo has brought the focus back on the alleged malpractices rampant in the Odisha SSC. Aspirants have widespread apprehension about their selection for a government job through the recruiting agency, and such scam solidifies those fears. Candidates awaiting their results for a long time now feel that their prospects of a government job are mostly hampered by such scams and bribery. Many candidates from across the state, those who have already sat for their SSC exams and preparing for the SSC jobs, have demanded a thorough investigation into the incident.

“It will be very unfortunate if the inquiry into the job scams in OSSC is proven true. It will just prove that many talented students were deprived of cracking OSSC and unworthy persons have been allowed to enter the service. There should be a diligent probe into the incident,” said an aspirant requesting anonymity.

Another aspirant, Chinmaya Rout, who appeared for the position of Junior Assistant in 2010, said, “Candidates who secured lesser marks than me got the job while I remained to wait for the same. After the arrest of Biranchi, I have tried to seek answers through RTI queries. The SP has assured me that everything will be clear once Sahoo confesses.”

There seems to be serious allegations and questions on the transparency and integrity of the entire commission. It is feared that Sahoo’s conduct is just a tiny glimpse into the severe corruption in the recruiting agency. Candidates feel there could be many others involved who block or unblock their prospects based on the bribe they demand and duly receive. These unbridled illegal practices in the OSSC must be stopped.

Reacting to the allegations made by job seekers, Nirmal Chandra Mishra, Chairman of OSSC said, “I am glad that people are complaining. If anybody in the Commission is found guilty, he/she will be dealt with according to the government norms.”

He asserted that all recruitment examinations by the OSSC are conducted with sanctity, and there is no link between the examinations and selection with the arrest of the tainted official.

“In order to clear the doubts rising in the minds of people, I would like to tell that we have adopted a transparent system of recruitment. It is not right to blame the whole system on the basis of a mistake committed by one person,” the OSSC chief said.

Through insider sources, it has also come to light that the vigilance team has taken the incident seriously. Notably, a vigilance team led by the DSP had recently arrived at the office of OSSC to investigate the allegations further. The team collected information and papers. They also held long discussions with the president and chairperson of OSSC in connection with the probe.

It is assumed that there are big players behind the picture that is yet to be extricated. People were privy to the suspects that Sahoo was just conducted in a large connexion with influential persons involved. Nevertheless, it now remains to be seen if the Vigilance department takes the investigation to its logical end or buckles under the pressure from the higher ones and wraps the probe with just Sahoo’s arrest.

There are no similar articles yet.