Pakistan Launches The First Anti-Polio Campaign Across The Country 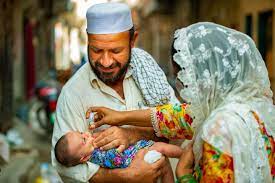 Pakistan launched its maiden anti-polio campaign on January 9, 2023, with its aim being toward the immunization of more than 44 million children under the age of five, according to Aljazeera.

The drive was inaugurated by Prime Minister (PM) Of Pakistan, Mian Shehbaz Sharif. The three-day campaign started on Monday in more than 150 districts of the country. The country started the first polio drive from the province of Khyber Pakhtunkhwa with Punjab set to begin on January 16 followed by Sindh and Balochistan.

“I have the conviction that all the provincial governments along with the federal government will continue collaborating to eradicate the disease forever,” Sharif said. He appreciated the efforts of frontline workers and law-enforcement agencies’ personnel who embraced martyrdom while performing their polio duty. Although, Pakistan has encountered conflicts.

“Unfortunately, Pakistan was among the few countries where polio cases had resurfaced,” a statement from the prime minister’s office said.

Pakistan, along with Afghanistan, is the only country where the viral disease of Polio is still endemic and has affected many children. In 2022, Pakistan reported 20 cases of degenerative disease from its Northern province, Khyber Pakhtunkhwa (KPK). 17 were from the tribal district of KPK, North Waziristan, and others were from the Lakki Marwat District.

The PM said that during the tenure of Mr. Nawaz Sharif in 2021, only one polio case was reported. Mian Nawaz Sharif is the elder brother of Shahbaz Sharif, who was ousted by the Supreme Court Of Pakistan over the Panama Leaks.

According to an official at the National Emergency Operations Center, the current nationwide campaign is the first since May of last year. “We were supposed to start a nationwide campaign in August last year but due to the floods, we could not do so,” he said on condition of anonymity to the Aljazeera correspondent. “Now we are aiming to utilize more than 350,000 health workers to not only provide polio drops but also additional vitamin-A supplement.”

Pakistan was hit by catastrophic floods last year, which affected 33 million people and killed more than 1,700. Thousands of people, including children, have died of waterborne diseases caused by stagnant floodwaters. The resurgence of the polio virus had raised global concerns, among Pakistan’s international partners including the World Health Organization (WHO) and other stakeholders.

According to UNICEF, Pakistan has shown important progress toward stopping Polio transmission. There has been a massive decline in polio cases since 1994. But to avoid resurgence and make Pakistan Polio free, it should be ensured that all vulnerable children under the age of five are vaccinated against this deadly disease in every door-to-door campaign.

In response, Pakistan faces resistance from its religious and militant groups who think the vaccine will cause sterility in their children. The groups also allege it is a “Western conspiracy.”  Some say the vaccine contains pig fat which is forbidden (Haram) for Muslims even though Government officials have rejected those allegations.

Pakistan's Government refers to this attitude of people toward the polio vaccine as a lack of education. According to Polio Eradication Program, All Muslim countries have used the same vaccine to eradicate polio and it is endorsed by the Imam-E-Kaaba. In Pakistan, all major Islamic clerics including Mufti E Azam Pakistan, have given fatwas in favor of the polio vaccine to encourage them to administer the vaccine to their children.

The health workers associated with the polio campaign have also been attacked several times in different regions of the country which killed many and left several wounded. The latest such attack took place on January 5 during a provincial anti-polio campaign when four policemen were injured in the Dera Ismail Khan district of the Khyber Pakhtunkhwa province, The News reported. There was also a rise in resistance to polio vaccines in some parts of Pakistan following the 2011 killing of Osama bin Laden by the United States military.

A Pakistani doctor ended up organizing a fake vaccination campaign to assist US troops in tracking down and killing a fugitive terrorist leader. Pakistani authorities later arrested the doctor and a court subsequently sentenced him to 23 years in prison.

In sum, Pakistan and Afghanistan are struggling to eradicate the virus from their country. According to the report of the Global Eradication Program, two cases were detected in 2022, and no new reported this year. For a country to be declared as Polio free, it had to be with no cases for consecutive three years.