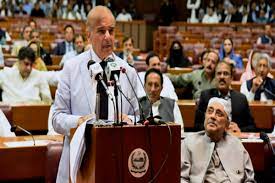 On Monday, soon after getting elected unopposed, Pakistan Prime Minister Shehbaz Sharif raised the issue of abolition of Article 370 in Kashmir while giving his first speech in the national assembly. He also stated that 'Kashmir people are bleeding and they want Pakistan’s diplomatic and moral support.'

Amid the political scramble, 70 year-old-leader who replaced Imran Khan said that they want a good relationship with India. However, it can only be possible after the resolution of the Kashmir issue. The abolishment of Article 370 leads to two different union territories of Jammu and Kashmir. He also targeted Khan for not taking drastic efforts when India abolished Article 370 in 2019.

Shehbaz Sharif asked Prime Minister Narendra Modi, to step forward for an important discussion on some huge social issues regarding unemployment, poverty, medical supplies, and many other issues for the betterment of both the countries.

In 2016 the tie between both countries became worse after the terrorist attack in Pathankot Air Force, and a blast in the Uri army camp which led to further bifurcation in both parts. The relationship reached a peak after the termination of Article 370.

Modi is one of few leaders to post on Twitter after Shehbaz was sworn in as the Prime Minister of Pakistan, stating, 'India wishes for a terror-free region and desires peace and stability for the development of both the country's people.'

Congratulations to H. E. Mian Muhammad Shehbaz Sharif on his election as the Prime Minister of Pakistan. India desires peace and stability in a region free of terror, so that we can focus on our development challenges and ensure the well-being and prosperity of our people.