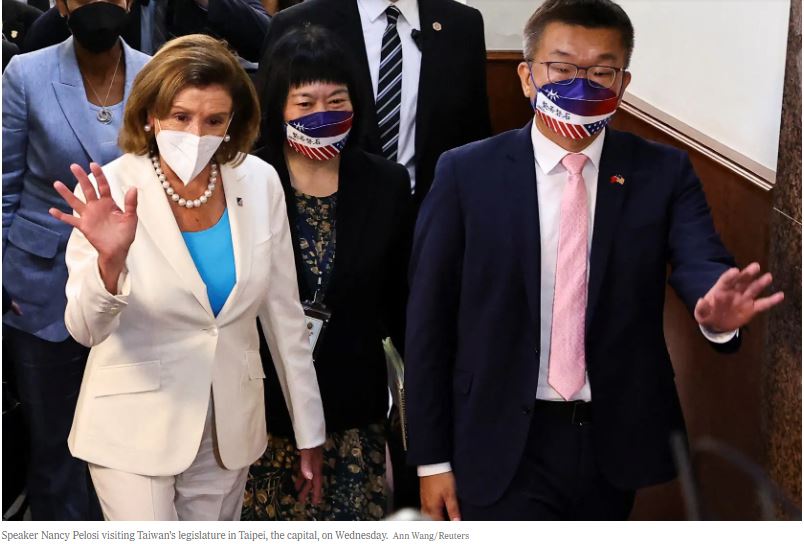 Yesterday marked the visit of the head of the Chamber of representatives of the United States, Nancy Pelosi, to Taiwan, to Taipei in particular. As a matter of fact, rumors kept spreading many days ago whether Nancy Pelosi had actually the intention to visit this China-proclaimed island, as she was on an Asian tour that included countries like Japan, South Korea, Singapore and Malaysia. It is important to note that the Chinese President Xi Jipping has already called Joe Bien President of the United States 6 days ago and warned him from provoking China or they “will perish”. This is due to the fact that China believes in the principle of a unified country and considering Taiwan as an integral part of its national territory and will not allow it to enjoy or acquire and international sovereignty.

The United States had been generally opposed to the Chinese intervening policies in Taiwanese affairs and had effectively supported it through the procurement of military supplies, without officially recognizing it as an independent country. The Taiwan affair had become over the years an object of debate and a crucial part of the rivalry between the United States and China, given that the latter overtly violated human rights and international law through its constant interventions making it eventually subject to international sanctions especially from the United States. In particular, Nancy Pelosi had clearly expressed intentions to preserve peace, security and democracy in Taiwan and by that she becomes the highest ranked U.S. official to have visited this self-ruled island in 25 years. Moreover, she is a democrat that has anti-China orientations.

In response to the latter action conducted by a U.S. senior officer, China had two major responses. First, the Chinese foreign minister called the White House and expressed Beijing disapproval and extreme anger and called Pelosi’s action as “manic and irresponsible” according to BBC News. Therefore, it is crystal clear that the visit sparked diplomatic tensions expressed by China’s last statements, supported also by Russia who is currently an important economic partner in the context of the Ukrainian war and the economic sanctions. As another reaction to Pelosi’s provocation, China had intensified its military exercises around the island in less than 24 hours after the visit, to the point where it was considered as the highest in 2 decades. To clarify, Taiwan was struck by Chinese missiles immediately after as a way to punish Taiwan and its navy are encircling the island. Not only did they hit the latter, but also the missiles hit near Japan threatening it as well. This was seen as a possibility from China’s military to hit the U.S. forces also.