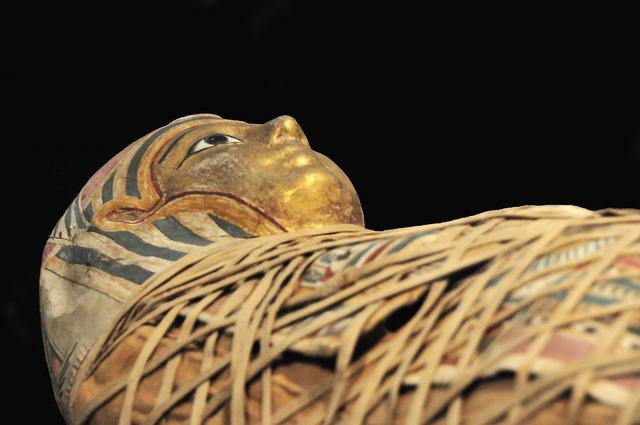 The Egyptian Ministry of Antiquities announced the finding of the "first and largest cache" in the Saqqara excavation area, south of Giza. It contains 150 bronze statues and 250 wooden coffins from the late period.

The statues uncovered in the tomb of the holy animals (Popastion), according to the ministry, are of various sizes and belong to several ancient Egyptian deities, including Anubis, Amun Min, Osiris, Isis, Nefertum, Bastet, and Hathor.

The archaeological team also discovered a series of bronze vessels associated with Isis ceremonies, such as Alslasel and a headless bronze statue of Imhotep.

Imhotep, who lived in the third millennium BC, built the Djoser Step Pyramid, one of ancient Egypt's oldest pyramids, and afterward became the god of medicine.

The archaeological mission, which has been excavated in the area for four seasons, is to "discover Imhotep's tomb."

The colorful wooden coffins date back to around 500 BC, and they were discovered closed with mummies in good preservation within

According to Reuters, several amulets and wooden figurines, and cosmetics like eyeliner and jewelry were uncovered.

Papyrus papers that had been sealed and undamaged were also discovered, and they were taken to the Egyptian Museum in central Cairo for examination and restoration to their original state.

The papyrus, which was believed to be nine meters long, most likely contained chapters from the Book of the Dead, a collection of Egyptian funerary texts that included incantations used to assist the dead into the afterlife.

Saqqara is a UNESCO World Heritage Site home to more than ten pyramids and is a treasure trove of numerous ancient antiquities. It is also a massive necropolis of the ancient Egyptian capital Memphis.

These treasures will be on display at the Grand Egyptian Museum in Giza, which the Egyptian authorities hope to open this year after several delays. Expectations are high for the new museum, located near the Giza Pyramids, and will feature recent discoveries that will help revive Egypt's tourism industry.

Will the Egyptian Ministry of Tourism's ongoing efforts and fresh incredible discoveries yield the results that such a historically rich country as Egypt deserves? Let us hope so