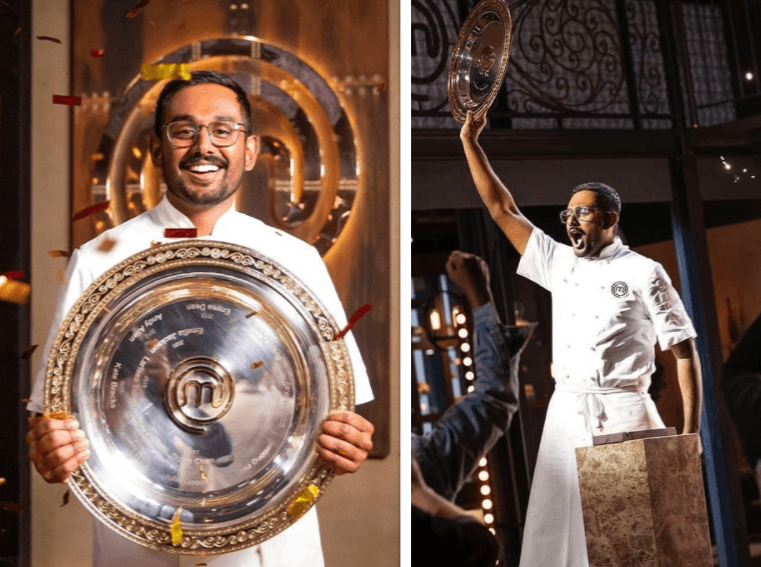 Masterchef Australia saw raining Indian dishes this season. With two people of Indian descent and overall four contestants with origins from the sub-continent it was a veritable dominance of Indian inspired cuisines for the world to see and appreciate. Finally, as an icing on the cake Indian-origin contestant Justin Narayan won the popular cooking show, clinching the title, bagging the coveted trophy and bringing laurels to India. He now becomes the second PIO to have won the show. Indian-origin prison guard Sashi Cheliah was the first to have won the 10th season back in 2018.

Who Is Justin Narayan? 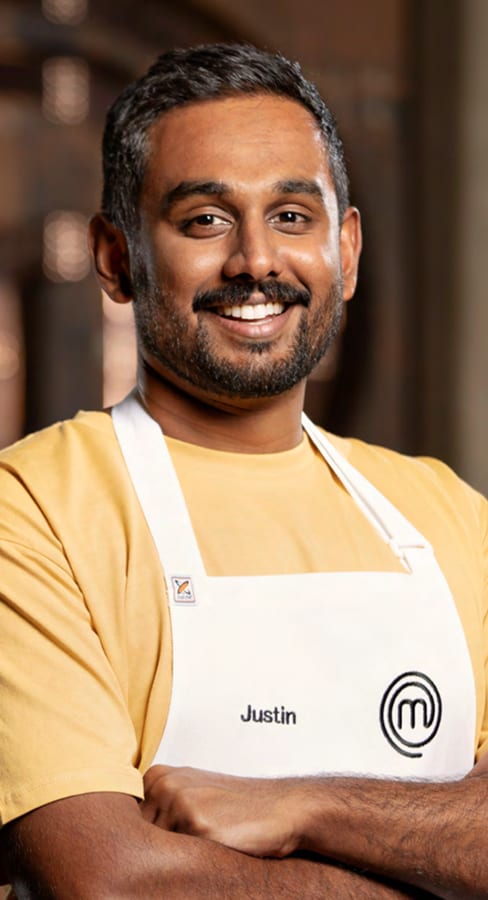 Justin Narayan is a 27 year old youth pastor who hails from Perth, Western Australia. He has both Fijian and Indian roots. He is a first generation born in Australia and consequently both his Fijian Indian heritage has always remained as his primary influence. “I like being able to be versatile and I like cooking different cuisines,” he said in a video charting his journey before the show.

Justin Narayan admittedly looks up to chefs like Gaggan Anand and Gordon Ramsay. But when it comes to immediate inspiration he doesn’t need to look much further than his own family. His mum is among his biggest influences and he regards her as “hands-down the best cook he knows”.

He is the eldest of three siblings in a closely loving family.  Justin has always been close to his parti (grandmother) and tata (grandfather) together with whom he watched cooking shows and cooked for them. His tata is now passed and Justin fondly remembers his many lessons about life.

Justin started cooking at the tender age of 13. He loves being motivated by the produce at hand to create memorable meals. He has always loved witnessing how his food can make people feel, often cooking for his fiancée Esther.

He began slowly in this year's competition but soon shone as one of the prized finds on the famous cooking reality show. Throughout his time on the show, he continually won the hearts of judges Andy Allen, Melissa Leong and Jock Zonfrillo when he cooked dishes like Indian Chicken Tacos, Charcoal Chicken with Toum, Flatbread and Pickle Salad, Indian Chicken Curry and his mother’s recipe for poached snapper. It was pretty evident that Narayan's cooking was really influenced by his multi-cultural background.

What permeated his journey at the competition were not only the highs and lows, but fitting and creditable comebacks in the face of it all. Justin is a risk taker and was praised throughout his journey during the course of the show for being a versatile cook.

The MasterChef Australia's grand finale was effectively divided into two days. The first day was an epic night of grand finale action which included two challenges with Pete finishing in the lead on 53 points, ahead of Kishwar on 51 and Justin on 50 – out on a scale of 60 points.

As part of the final challenge on the cooking show, the contestants had to recreate two of Australian chef Peter Gilmore's dishes— a savoury dish from the Quay menu, shaved southern squid with koji butter and shiitake custard and his brand-new dessert, golden crackle from his Bennelong menu.

Justin scored a perfect 40/40 for his squid dish - taking his total to 90. For the dessert, Justin got a 35 which secured his win by a razor thin margin of just one point. Pete was placed as the first runner up, while Kishwar stood as second runner up.

Justin Narayan clearly stole the show with his flawless flavours continuously impressing all three judges. “It is a very humbling experience and I am absolutely honoured to be a part of it. I’m going to be a sponge and try to enjoy as much of it as I can," the young chef said.

With this win in a pretty tough and emotional final episode, Justin Narayan was crowned the winner of Masterchef Australia 2021. He took home the prized trophy and the whopping huge prize money of $250,000 (₹1.86 crore).

Post the incredible triumph; he shared a string of celebratory images on his Instagram account. Captioning the photos with some inspiring message for his followers, the newly crowned masterchef wrote “Find people that believe in you. Back yourself. Go hard and hopefully you’ll surprise yourself! Whoever’s reading this I love you (sic).” He later elaborated in a video message: "I just won MasterChef Season 13, 2021. What the actual heck? It's a surreal feeling. It's going to take a while to sink in. I'm keen to party with these guys, but a huge thank you to the judges, the other contestants - Pete, Kishwar. Pete in particular, 'I freaking love you, bro'. This has just been the best experience of my entire life and my mind is blown.”

MasterChef Australia also announced the news about Justin's win on their official Instagram page. They shared his happy pictures with the trophy captioning it with, “Congratulations to our #MasterChefAU 2021 WINNER!” A video of Justin's reaction to winning the show was also shared. "We think it's safe to say @justinnarayan''s mind is blown right now," the post read. Justin Narayan was all smiles in the video taken right after the announcement. Justin described the win as a ''surreal feeling'' in the clip. "Huge thanks to the judges and other contestants. It was the best experience of my life," he said.

Further in an IGTV video uploaded on MasterChef Australia’s Instagram handle, a victorious and exultant Justin says that “It’s gonna take a while to sink in.”

As per reports, Justin stated that it’s his dream to own and run a food truck or a restaurant. He added that he would like to pay an ode by focussing on Indian flavours on his personal menu, especially the ones that he grew up eating.

Narayan also said that he would want to donate portions of his earnings to charities that would help aid slum dwellers and educate underprivileged children in India.

After an entertaining journey filled with ups and down, season 13 of the show came to a beautiful close. Justin Narayan has indeed made everyone proud with his incredible and creditable win. With him the trophy has found its way to India again. His victory marks an encouragement for other aspiring Indian cooks to pursue their dreams. For his closing remarks Justin described MasterChef as '100 per cent one of the best experiences I've ever had in my life'.

This season also saw three other amazing contestants of the Indian subcontinent who cooked up a storm with their Indian inspired dishes and firmly established even some of the typically modest recipes on the global platform.

Mentioning the three contestants from the famed contest this fall – Born and raised in Melbourne, she has her roots in Bangladesh and India who impressed the judges throughout an emotional journey with simple dishes inspired by her home. Her dishes were always praised for her impeccable balance of flavours. She infused her presentations with powerfully humbled stories which made her dishes all the more relatable. She ended of as the second runner up winning a prize money of $20,000 at the end of a stellar graph in the competition. She is a Delhi-born Indian origin contestant who wowed with her commendable culinary skills throughout her journey. . The home cook received critical acclaim for bringing pan-Indian flavours to the MasterChef platform. Although Depinder was able to make it to the list of top 10 contestants, she was eliminated only a week ago. 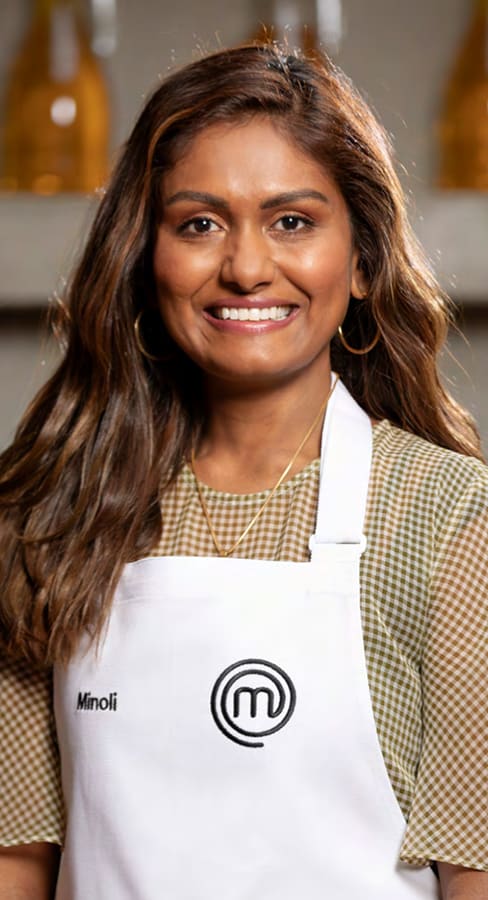 Minoli is born in Srilanka and stays in Melbourne. By her own admission the culinary delights of her homeland was firmly infused in her since childhood. The judges were continuously bowled by her beautiful Srilanka inspired dishes some of which were even recognised as ‘dishes of the day’. Though she was initially eliminated, she was recalled for a comeback and entered Top 10 as the 10th contestant. She was farewelled after a wonderful journey in a double elimination.