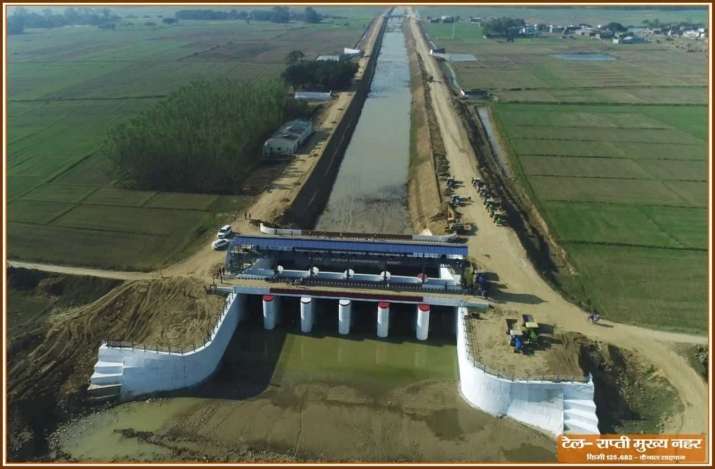 Prime Minister Narendra Modi inaugurated The Saryu Nahar National Project on Saturday, Dec 11 2021 in Balrampur, Uttar Pradesh. The project was suspended in the pipeline in 1978.

Modi Ji addressed the people and conveyed how Inflation has affected the project cost during 43 years blaming the previous government for its negligence. In 1978, project capital was settled for ₹100 crore but ended with drum beats only as it was delayed due to lack of continuity of budgetary support, interdepartmental coordination and adequate monitoring. In 2016 project was resurrected under Pradhan Mantri Krishi Sinchayee Yojana and hence cost about ₹9,800 crores out of which ₹4,600 crores were sanctioned in the previous four years, PM Narendra Modi further said that he is waiting since morning that someone from the opposition would come to proclaim credits for the project as it is a force of habit for them.

The Saryu Nahar National Project reaches a length of the canal of 6,623 Km to assist small scale farming interlinking five rivers Ghagra, Saryu, Rapti, Banganga and Rohini. The Project will benefit nine districts Bahraich, Gonda, Siddharthnagar, Basti, Sant Kabir Nagar, Gorakhpur and Maharajganj which will foster the future yield of crops utilising optimum utilisation of water resources covering about 14 lakh hectares of land which will improve the rural conditions of about 25 lakh farmers and their families.

After this, a backlash on Twitter was followed, by right-wing activists questioning Why the media isn't covering something of relevant significance?. #UP_ki_sichayee_kranti marked trending at No. 7 with 56K tweets today.