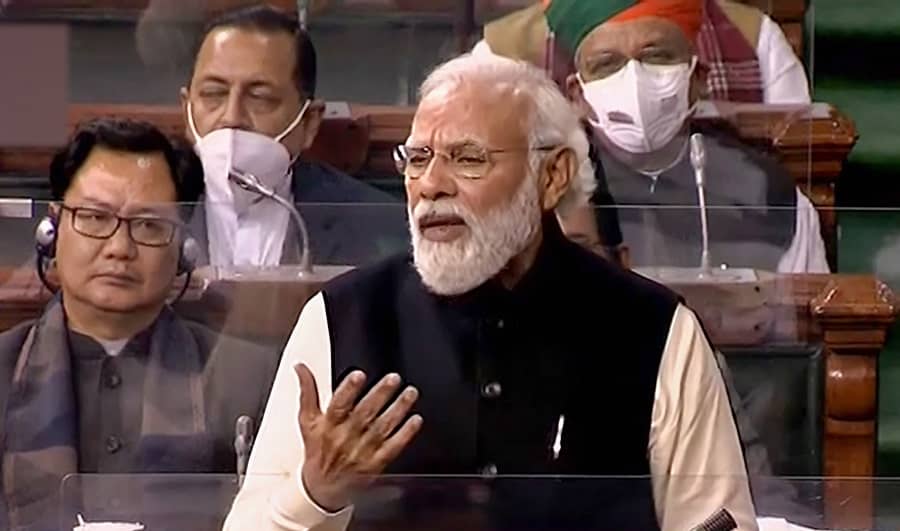 On Monday, Prime Minister Narendra Modi delivered a savage assault on Congress, claiming that the party has refused to grant people's majority in various states for decades yet continues to participate in "blind opposition." He claimed that the opposition party's views and behavior indicate it will remain out of power for the next 100 years. "We are strong supporters of democracy." Additionally, we consider that critique is a critical essential element of democracy. However, "mindless resistance to everything is never the path forward," Modi stated in response to the Lok Sabha and Rajya Sabha holding a combined session to debate the President's address.

He claimed that during COVID-19, congress crossed all boundaries. While underprivileged people in this nation are getting gas connections, houses, and bathrooms, Prime Minister Narendra Modi stated that some people's minds are stuck in 2014. In addition, PM Modi also announced a new international order in the aftermath of the COVID-19 outbreak and that the country must assume global dominance.

In the joint sitting of both the Houses of Parliament, President Kovind gave a 50-minute statement of the Legislative Session that his government policies had earlier prioritized underprivileged and neglected parts of society. He emphasized the government COVID-19 response, record agricultural product procurement, and improved internal security as "collective victories" of the billion-plus country.

On Monday, February 7, 2022, the Rajya Sabha adjourned for an hour to pay tribute to the legendary musician, the Nightingale of India Lata Mangeshkar. Chairman M Venkaiah Naidu gave a memorial reference, after which MPs rose in commemoration of the dead. He then postponed the proceedings for an hour. The legendary singer died on Sunday in Mumbai.

PM Modi commended President Kovind's address to Parliament, saying it discussed India's developmental progress and represented the shared goal of 130 crore Indians to lead the country to greater heights in the future. The debate over the resolution of appreciation for his address began on February 2, with both chambers dedicating 12 hours to it in the first half of the budget session. It began with BJP MP Harish Dwivedi arguing that during the Yogi Adityanath government's five years in power, 4.5 lakh youngsters were provided jobs, and 36,000 crores in agricultural debts were canceled. He also criticized past governments at the Centre and in Uttar Pradesh for merely paying lip service instead develop disadvantaged and backward communities.

The first opposition candidate to comment, Congress president Rahul Gandhi, criticized the government for separating India into two halves, one for the wealthy and one for the poor, and said the disparity was widening. Giving a speech first from the Opposition benches in the Lok Sabha, he said the address to a joint sitting of Parliament did not address the country's central challenges and was a "list of several bureaucratic ideas" rather than a grand direction.

According to the Congress leader, the President's message did not mention the unemployed. According to Gandhi, there are two India—one for the wealthy and another for the poor— the distance between them is growing, and asked Prime Minister Narendra Modi to begin working on the two India, formed by this cabinet, together.