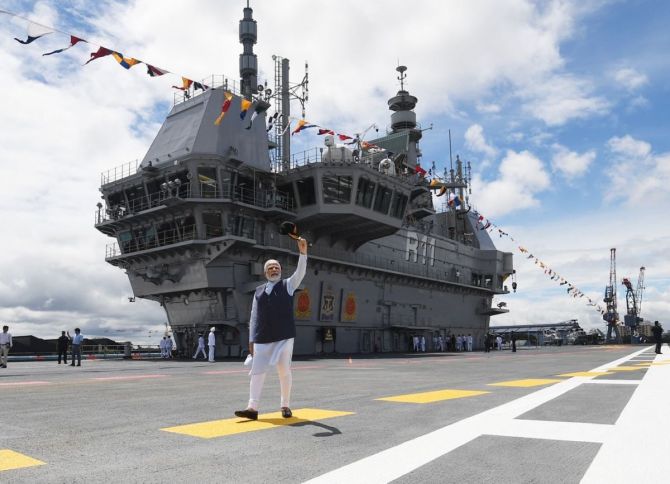 INS Vikrant, India's first home-built aircraft carrier, was formally commissioned today after completing nearly a year of sea trials. The 45,000-tonne warship was built at a cost of Rs 20,000 crore. The aircraft carrier was commissioned by Prime Minister Narendra Modi at the Cochin Shipyard. During the event, PM Modi also unveiled the new Naval Ensign. The Navy had earlier said the new insignia will be more befitting of the rich Indian maritime heritage.

262 metres long and 62 metres wide, INS Vikrant is the largest warship to be built by India. It can carry 30 aircraft on board, including MiG-29K fighter jets and helicopters. The warship can accommodate a crew of nearly 1,600. INS Vikrant is set to have MiG fighters and choppers. The Navy is under the process of procuring 26 deck-based aircraft, narrowing down to Boeing and Dassault aircrafts.

The warship has been under development for over a decade. Multiple phases of sea trials of INS Vikrant have been completed since August 21 last year. Aviation trials will be held after the navy has its command. At present, India has only one aircraft carrier, INS Vikramaditya, which is built on a Russian platform.

Defence forces have sought three carriers in all, one spare besides one each for the two main naval fronts in the Indian Ocean and Bay of Bengal. INS Vikrant is named after its predecessor, which played a key role during the 1971 war against Pakistan for the liberation of Bangladesh.

With INS Vikrant, India joins a select group of nations, such as the US, UK, Russia, China and France, that can design and build their own aircraft carriers. The Indian Navy sees the new warship as a key addition to its arsenal. India can now deploy its aircraft carrier on both the eastern and western seaboards and expand its maritime presence.

Meanwhile, China has been aggressively expanding its strength at sea. Recent satellite images indicate that China's naval base in Djibouti, on the Horn of Africa, is now fully operational and supports warships deployed in the Indian Ocean region. India was also concerned about a Chinese "spy" ship recently docked in Sri Lanka. India's existing fleet includes one aircraft carrier, 10 destroyers, 12 frigates and 20 corvettes.