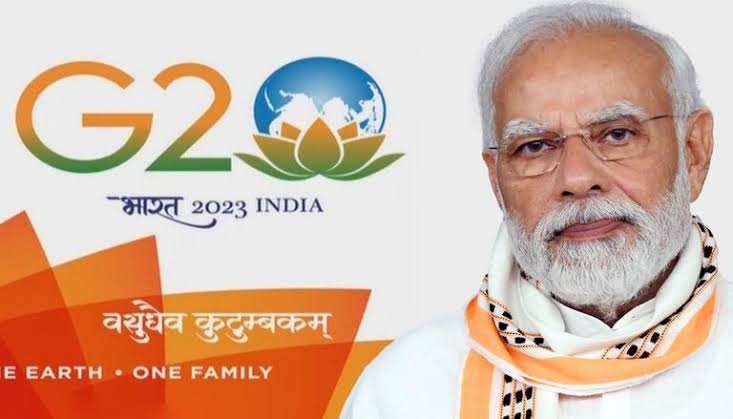 On Tuesday, Narendra Modi, the prime minister of India, showed the logo, theme, and website for the G20 presidency.

G20 was introduced in 1999 after a financial crisis in East Asia and Southeast Asia at the end of the 1990s. It included middle-income countries to keep world finances stable. The logo features a lotus and the phrases "One Earth, One Family, One Future." Vasudhaiva Kutumbakam.” The Prime Minister, who was there via video conference, talked about what the lotus flower means.

The Prime Minister said “A pandemic that occurs only once every 100 years has the potential to cause protracted hostilities as well as significant economic unpredictability. However, the lotus blossom featured on the G20 logo represents optimism in these troubled times. "Even if circumstances become far worse, this lotus will continue to thrive,”

The Prime Minister further said that because of the ideology of Vasudhaiva Kutumbakam, which holds that the whole world is one giant family. India had been dedicated to maintaining global peace from the very beginning of the country's existence. The emblem expresses this concept visually. He stated, "The lotus blossom symbolizes our Puranic heritage, our religion, and our Buddhist" (intellectualism).

As stated by the Prime Minister, one essential aspect of the emblem is the lotus flower, which has seven petals corresponding to seven different continents. In addition, the international language of music comprises seven different notes.

The resulting composition sounds wonderful when arranged into music using all seven notes. Nevertheless, the sound of each note is distinctive. Similarly, the G20 aims to bring the world closer while protecting its diversity.

According to the G20 website, at the proposal of the G7 Finance Ministers, the G20 Finance Ministers and Central Bank Governors began meeting to discuss how to cope with the global financial crisis. Every year since 1999, finance ministers have gathered for a summit.

During its G20 Presidency, India will hold 200 meetings in 32 different areas around the country, according to an official statement. The G20 Summit is next year.