PM Modi leaves on 3-day visit today; meeting the US president, holding talks with the ‘Quad Leaders’ summit’, addressing the agenda on UNGA

Prime Minister Modi will commence a three-day visit to the US on Wednesday to attend the Quad Leaders' Summit. Sermonising, the first high-level in-person meeting of the 76th session of the United Nations General Assembly and a bilateral meeting with the US President Joe Biden at the White House after six months of a pandemic.

External Affairs Minister S Jaishankar and National Security Advisor Ajit Doval high-level delegation would accompany PM Modi. The cardinal elements in the program are participating in the Quad Summit, holding talks with the US president, Business communique at the UN General Assembly.

To the approaching event in the US, Foreign Secretary Harsh V Shringla said, Prime Minister Modi and Us President Joe Biden will talk over the ongoing regional security following the recent upturn of the government in Afghanistan in a bilateral meeting on Sep 24. Two leaders, he added, will focus more on the need to beef up on radicalism, extremism, and cross-border violence, as well as the weakening global terrorist chain.

The Quadrilateral Security Dialogue, comprises the United States, India, Japan, and Australia. It is an informal organization of the four countries that meets semi-regularly, conducts cooperative military drills, and discusses regional, economic, and development assistance.

A statement released by PMO read that, “PM Modi will participate in the first in-person Quad Leaders’ Summit along with President Biden, Prime Minister Scott Morrison of Australia, and Prime Minister Yoshihide Suga of Japan.”

The Quad leaders will discuss issues related to the containment of COVID-19, as well as ensuring Indo-Pacific security. The leaders will review progress since the March summit, particularly the COVID-19 vaccine partnership, and identify new cooperation areas that will highlight and deepen the positive and constructive agenda of the port, including issues that have risen since the March summit. 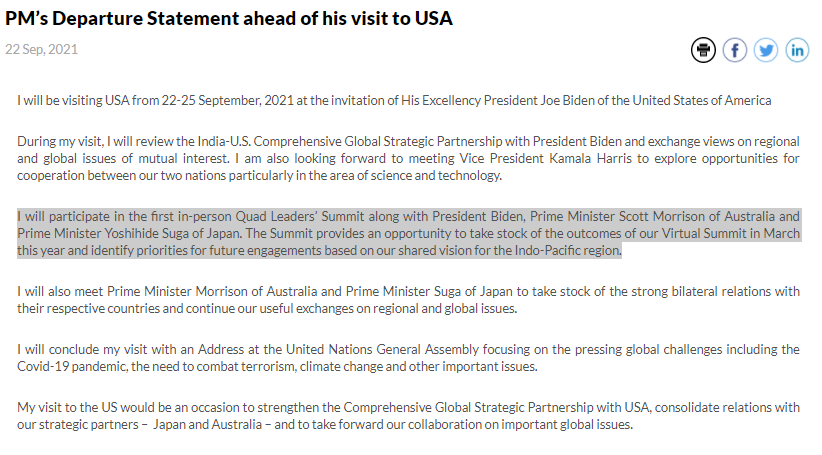 Addressing the United Nations General Assembly (UNGA), PM Narendra Modi, on 25th September, will give a speech on the theme, "Building resilience through hope to recover from COVID-19," "Rebuild sustainability," "Respond to the needs of the planet," "Respect the rights of people" and "Revitalise the United Nations." During the 76th session of the UNGA, he is the first head of state invited to speak. 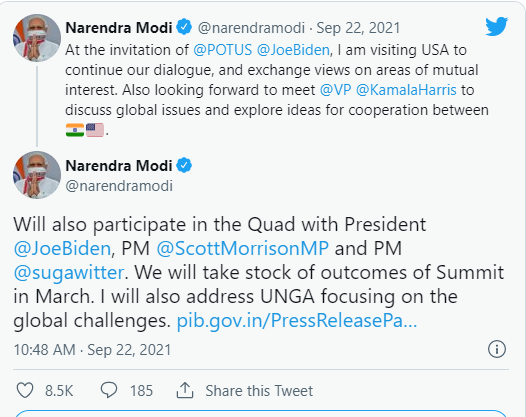 Our team of journalists and editors from all over the world work relentlessly to deliver real stories affecting our society. To keep our operations running, we depend on support in the form of donations. Kindly spare a minute to donate ₹500 to support our writers and our cause. Your financial support goes a long way in running our operations and publishing real news and stories about issues affecting us. It also helps us to expand our organisation, making our news accessible to more everyone and deepening our impact on the media.