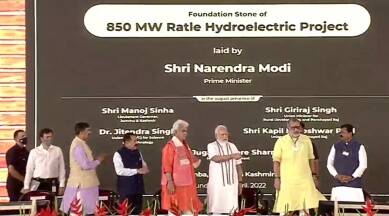 Prime Minister Narendra Modi visited Jammu and Kashmir on Sunday, his first visit since the repeal of Article 370.  The Prime Minister’s visit was to celebrate the National Panchayat Raj Day where he addressed members of more than 30,000 Panchayat Raj Institutions in Jammu.  Kashmir and other PRIs have joined through virtual mode

Modi has given the green signal for various development projects worth Rs 20,000 crore in the Union Territory.

Prime Minister Modi has laid the foundation stone of the hydropower project which will be built on the Chenab river in 850 MW Ratle and 540 MW Kwar Kishtwar districts.

In addition, he inaugurated the ‘Amrit Sarobar Mission’ as an image of ‘Azadi Ka Amrit Mahotsav’ which will focus on the development and reconstruction of 75 reservoirs in each district of the country.

Speaking in a rural village in Samba district, Modi said, “It is a moment of pride for everyone that democracy has reached its zenith in Jammu and Kashmir in which I am communicating with all of you from here.”

As one of the most important steps for the Union Territory was yet to be completed on Sunday, many top business leaders of the UAE also visited Jammu and Kashmir with Prime Minister Modi.  UAE companies are expected to invest up to Rs 3,000 crore.  This is the first time that any international organization has invested in a union territory since Article 370 was repealed.

Prime Minister Modi also sent a special message to the Kashmiri youth that “I am here to prove to all of you that you will never face the same hardships and problems that your parents and grandparents are suffering.”

His visit almost three years later signals a whistle blow for the BJP government to return the J&K kingdom as its Boundary Commission moves to 90 seats in the legislature as many countries, such as the United States, push for its reinstatement.  J&K’s democratic process.