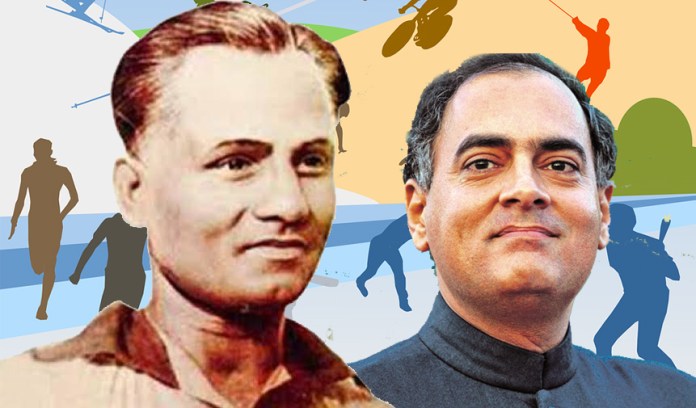 In another match, the women’s team also performed well in the match but could not fetch the medal after losing to Great Britain by 3-4 and finished at number 4 at Tokyo Olympic 2020, which is the best Olympic performance by any Indian Women Hockey Team.

Virat Kohli, hockey legend Sardar Singh, Sania Mirza, MS Dhoni, Vishwanathan Anand, Dhanraj Pillay, and Sachin Tendulkar were among the players who received the Khel Ratna Award in the past.

It is well known that the highest sports award of India established in 1991-92 was named after ex-Prime Minister Rajeev Gandhi. This award is given every year to the players of India for the most outstanding performance in the field of sports for the last four years at the international level. Under this award, the player is given prize money of Rs 25 lakh, a medal, and a certificate.

Major Dhyan Chand, who is called the 'magician' of hockey, has made an unforgettable contribution to hockey. He scored a total of 13 goals in his last Olympics (Berlin 1936). In this way, Dhyan Chand scored a total of 39 goals in Amsterdam, Los Angeles, and Berlin Olympics, which is the story of his kingship. His birthday (29 August) is celebrated as the National Sports Day of India. On this day, every year the highest sports honors Khel Ratna, Arjuna, and Dronacharya awards are given for outstanding performance in sports. This award was started in 1991-92.

The journey of Dhyan Chand's achievements has invariably made Indian sports history proud. There is a golden moment for Indian hockey which every Indian wants to experience another time. Everyone has admired the spirit of Dhyan Chand, who won India hockey gold medals in three consecutive Olympics (1928 Amsterdam, 1932 Los Angeles, and 1936 Berlin).

MLA from Rajasthan and ex-Olympian Krishna Poonia accused the Narendra Modi-led central government of playing politics in the name of sports. She further added that the renaming of existing awards is a waste exercise, instead of this the central government should announce a new award in the name of legendary hockey player Major Dhyan Chand. She further demanded Bharat Ratna for legendary Major Dhyan Chand.

Meanwhile, Mr. Anurag Thakur, Union Minister for Sports welcomed this decision and asserted that legendary hockey player Major Dhyan Chand is India’s most loving sportsperson. In his tweet, Anurag Thakur added, “Major Dhyan Chand is India’s most legendary & loved sporting icons; it is only befitting that India’s highest sporting honor be named after him. His life and achievements have inspired generations of sportspersons who have achieved glory for India." 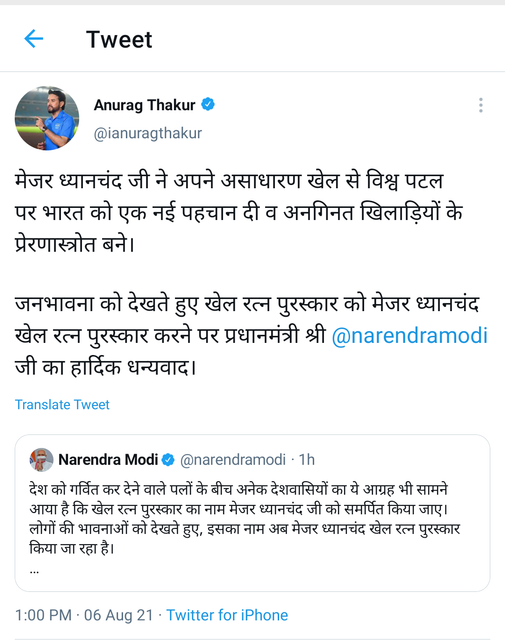 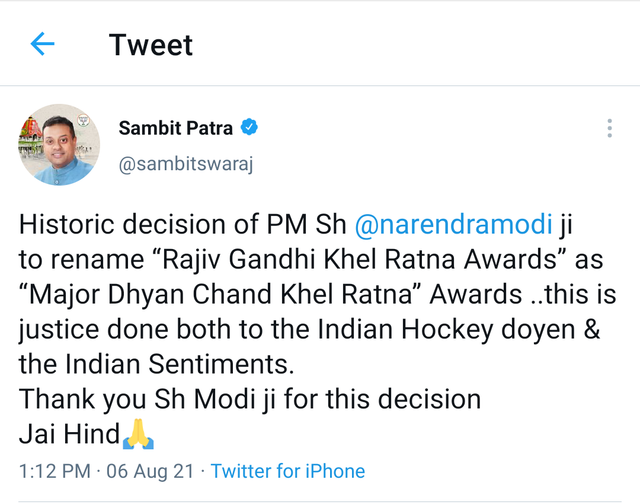