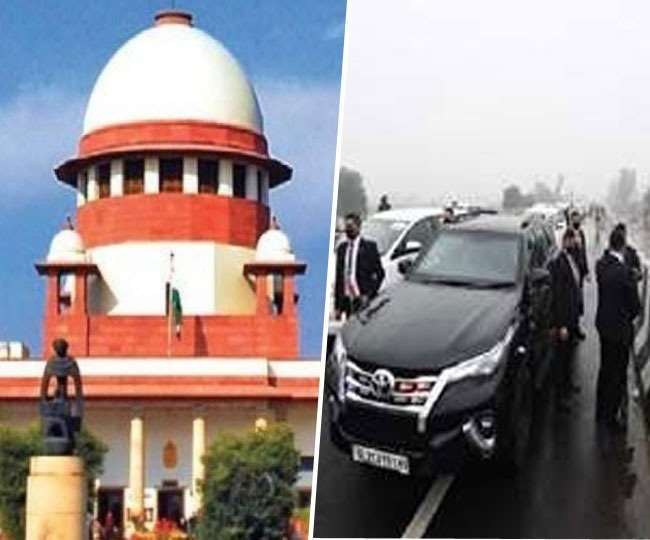 Hearing in the matter of lapse in the security of Prime Minister Narendra Modi is going on in the Supreme Court today. The petitioner's advocate Maninder Singh has started presenting his case before a bench headed by Chief Justice of India NV Ramana. Hearing the matter, the Chief Justice said that we have received documents related to the security of the Prime Minister at 10:00 am today.

In this matter, the counsel for the Punjab government said to show 7 causes for which notices were issued to their officers. He did not get any opportunity to make his point. when the committee's inquiry is on hold, then what is the justification for issuing notice?

Senior Advocate DS Patwalia of the Punjab Government said that they do not have faith in the committee of the Center, so the court should constitute the committee on its behalf. During the hearing of the case, the counsel for the Punjab government said that if the Supreme Court wants, then a separate inquiry committee should be constituted in this matter. We will cooperate with that committee, but our government and our officials should not be blamed now. He further said that there will be no fair investigation by the central government in this matter. Please appoint an independent committee, and give us a fair trial.

In the last hearing, the top court had ordered to keep all documents related to the PM's visit to Punjab, safe and stop the investigation of the central and state government. Senior advocate Maninder Singh has filed this petition.

on January 5, the Prime Minister was to address a rally in Ferozepur, Punjab. Before that, he was also supposed to visit the National Memorial at Hussainiwala, but on his way back he had to return due to the farmers'  protest on the way. During this, his convoy was trapped for 20 minutes.

earlier in the hearing, the Supreme Court has made DG, Chandigarh and an officer of NIA as nodal officers in this case. The Supreme Court said that we are serious about the security of the PM. The states and the centre should consider their own committee. The Supreme Court said that the Registrar of the Punjab and Haryana High Court has been ordered to secure the records. All the information of PM Modi's route has been asked to be kept safe. The court has also asked the Punjab government, Punjab Police, SPG and other agencies to provide necessary information to the Registrar General. Apart from this, the National Investigation Agency (NIA) has also been asked to cooperate.

The central government said that the security agency and the state police were in touch with each other. Letters were sent from the Center to the state police, in which there was also a warning about the farmers'  protest. Despite this, the police neither made arrangements for a safe passage for the Prime Minister nor cleared the road. A senior Home Ministry official has accused the Punjab Police of negligence, saying that it has not followed the 'Blue Book' rules related to security. The job of the SPG is to lay siege to protect the Prime Minister, but the responsibility of protecting the rest rests with the state. The ministry has also asked the state government to submit a report on this matter.

What is the whole matter?

PM Modi was about to reach Firozpur in Punjab to lay the foundation stone of various projects worth Rs 42,750 crore. For this, he was being taken to the National Martyrs Memorial by road as it was not possible to go by helicopter due to bad weather. But at some distance from the venue, farmers protested and blocked the road, due to which the Prime Minister's convoy was stuck on the flyover for 15-20 minutes. As the road was not empty, he had to cancel his rally and return.