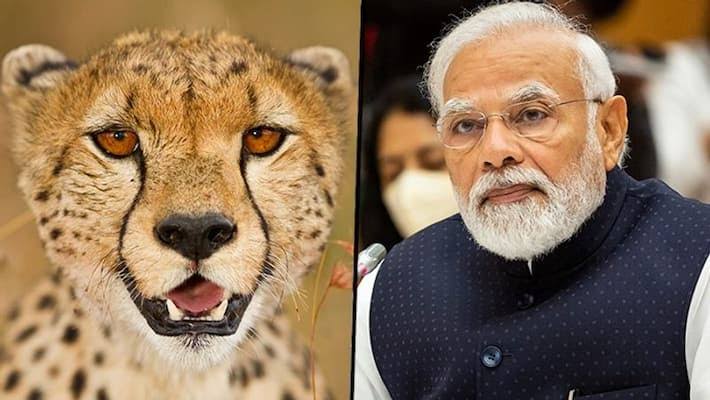 PM Modi brightly released eight Cheetahs into the Kuno National Park located in the state of Madhya Pradesh, flown in from Namibia, South Africa. The new members of our country's animal kingdom arrived in Gwalior via special cargo Boeing 717 this morning.

These big cats aren't exactly novices to India's wildlife; they only went extinct in 1952 due to illegal hunting and malpractices leading to habitat loss.Started by PM Modi himself, the efforts put into the project were decades in the making. However, immense research-based policies and public participation played a significant role in accomplishing this feat.

The main objective of Project Cheetahs, as emphasised by PMO, isn't limited to just sustainability or security but nature and the environment. All it encompasses is the basis for sensibility and spirituality for India. In addition, of course, the local ecosystem and biodiversity should flourish due to the admission of cheetahs by revitalising the wildlife.

The reintroduction of wild species is implemented per the guidelines established in the International Union for Conservation of Nature (IUCN).The Supreme court initiated the plan to reintroduce the African cheetah, a suitable habitat here in India.

However, the discussion began back in 2009 by the Wildlife Trust of India. The likes of wildlife experts sought the decision to survey suitable sites, officials of the Ministry of Environment, Forests and Climate Change and state representatives for the potential reintroduction of cheetahs to the then extinct species.

The project is an inter-continental significant wild carnivore translocation, stipulated to be the first of its kind. Cheetahs will aid in the re-establishment of India's open forest and grassland ecosystems. In addition, it will benefit society by preserving biodiversity and improving ecosystem services, including water security, carbon sequestration, and soil moisture conservation.

The Centre unveiled a strategy for bringing Cheetah to India in January 2022. Fifty cheetahs will be released in various National Parks throughout the project's five-year lifespan. Due to habitat degradation and overhunting, the cheetah is the only big carnivore to have gone extinct in India. According to the Centre, introducing the cheetah is not just an effort to help the species recover. It allows ecosystems to recover a lost component essential to their evolutionary history.

Inflation Drives Up Cost Of Living In UK: Wages Fail To Keep Up