Pope Francis on the War in Ukraine 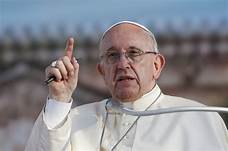 Yesterday, the Pope, during the Regina Coeli (a joyful prayer addressed to Mary, mother of the Risen One), made a speech asking once again for the fire to be ceased and for peace to be restored in Ukraine.

During the day in which faithful gathered around the venerated image of Mary in the Shrine of Pompeii, to address the Supplication, the Pope strongly and passionately gave voice to his thoughts and prayers. "In the face of the madness of war, let’s please continue to pray the Rosary for peace every day, and let’s pray for the leaders of nations, so that they do not lose the ‘people’s sense of smell’, who want peace, and know well that weapons do not carry it, never" he said. In short, people in Ukraine are suffering, and weapons are not the solution to this conflict since they alleviate neither fears nor problems, but only bring more suffering and pain.

This affirmation has been the object of tons of discussion, which have taken place, especially in the last few months; should we or shouldn’t we send weapons to help Ukrainians against the follies of Russian leader Putin? Many countries have conveyed that it is just and necessary to do it, otherwise, Ukrainians would have no other choice than that of surrendering and obeying the insane wishes of a de facto dictator. Others, instead, believe that giving arms is just another way to contribute to the continuation of the war, resulting in more deaths and injuries.

The Pope had already addressed the issue of war several times during his public interventions and the Holy Mass, always supporting the idea that “the war of aggression against Ukraine is inhuman and sacrilegious”. Since the beginning, he has spoken about the atrocities that are happening in the Eastern part of Europe, often making the war the object of his prayers and hopes. The Pope has frequently asked people to pray for an end, in favor of all those who are running away from the conflict, who have lost someone, and who are scared to death for their lives and their future.

But he has not just made an appeal to the believers but also to the whole international community, begging for the commitment of all countries in the world to stop the armed conflict, clearly stating that there is no justification for what has happened and is happening. Innocents’ lives are being taken away, men and women are being forced to fight and resist, cities are being destructed, and young girls are suffering every day the abuses of the Russian army.

The Pope firmly stands on the side of peace, will the international do the same? Will His words remain once again unheard? Will the leaders of the different countries unite their forces and find a way to end the war once and for all?