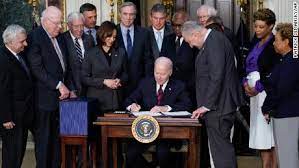 The Pentagon said that $350 million of this package is composed of 18 heavy artillery guns, 22 tactical vehicles, and over 36,000 rounds of ammunition. The U.S will also provide two coastal defense systems, thousands of night vision and thermal goggles, as well as secure radios, totaling an additional $650 million, via Forbes Magazine.

As well as military aid, President Biden announced that $225 million will be sent as humanitarian assistance. The $225 million will help provide Ukrainian citizens access to healthcare, clean water, medical supplies, and food.

Since Russia invaded Ukraine on February 24th, the United States has provided Ukraine with military and financial relief 12 different times, totaling over $54 billion, according to CNBC. When combined with the $1.2 Billion approved on June 15th, the total aid sent to Ukraine is now roughly $56 billion. The U.S has also deployed over 100,000 troops to NATO member countries closest to Russia and the ongoing war.

On May 19th, the U.S Congress approved a $40 billion relief package for Ukraine, which brought the total U.S investment to over $54 billion. Around 40% of the $40 billion package was composed of military equipment, and the rest was sent to Ukrainian domestic agencies, U.S diplomatic services, and humanitarian relief. According to the U.S Agency for International Development, Ukraine has received the most financial support in a year in U.S history.

As Ukraine struggles to fight off the Russian invasion, government officials are pleading with Western countries for support. “No matter how much effort Ukraine makes, no matter how professional our army, without the help of Western partners we will not be able to win this war,” said Hanna Malyar, Ukraine’s Deputy Defense Minister in a televised press conference.

Western countries are toeing a fine line, as Russia has nuclear capabilities and Russian President Vladimir Putin has threatened to use them if other countries become militarily involved in the war. President Biden has acknowledged this, and will most likely not involve the U.S past sending financial support.

President Biden has also refused to send Ukraine rockets that have enough range to strike into Russia, probably to avoid angering Russia and starting a wider conflict. While Ukraine is outmanned and outgunned, they are still fighting for their homeland. Eventually, one side will win the war, and Western countries will have to deal with the results.