President Biden visits Israel as tensions in the region grow 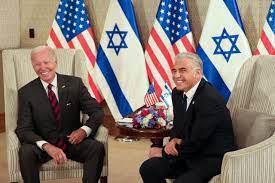 Israeli officials also told President Biden about the billions of dollars Iran is spending on the development of new weapons, and its distribution of arms to various proxy groups throughout the region.

President Biden spoke of blocking Iran from obtaining nuclear weapons, not stopping a program that could develop one, a key distinction from the Israelis, who were primarily focused on stopping Iran’s possible nuclear development.

The two nations have different approaches to how to deal with the Iranian threat. President Biden and the United States have insisted on a diplomatic approach, arguing that a restoration of the 2015 Iran nuclear agreement (Iran will keep uranium enrichment levels well below what is required to make a nuclear weapon) is the best way to find a solution to the issue.

Israel has taken a different approach, using covert operations to sabotage Iran’s ability to enrich uranium to nuclear levels. There has been violent conflict between the two sides for years, and Israel has kept the United States in the dark about recent operations. Iran blames Israel for recent assassinations of Generals and nuclear scientists, which Israel denies.

The United States and Israel are close allies and have worked together to establish security in the region. Recently, the U.S and Israel created an air defense zone to protect against Iranian drones and missiles. Before the meeting, President Biden was given a tour of Israel’s multi-tier air defense system, including the iron-beam project. The iron-beam project is an Israeli-made laser air defense system, and the Israelis are hoping to receive support from Washington in further development and deployment of the product.

“These technologies and advances are critical, every rocket that is intercepted is another life, maybe more, that is saved,” said President Biden during his meeting with the Israeli Prime Minister.