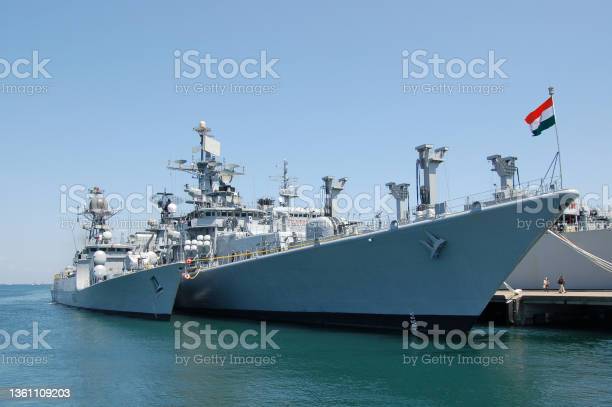 Once in every President’s tenure, who is also the Supreme Commander of arms forces,the Indian Navy displays its prowess and capacity to him/her.Since Independence, 11 President's fleet review has been conducted two(2001.2011) of which were international as they invited the display of select foreign Navy.This year the ceremony took place for two days, 19th and 20th February.

Explaining the importance of this event, the Indian Navy said,“In terms of significance, the Navy’s Presidential review is second only to the Republic Day Parade”

It is a marvelous exhibit of numerous ships and naval artillery which garners a huge crowd in Visakhapatnam, where the display is arranged.

The president is seated in one of the Naval ships on display, from which he views and reviews the fleet of ships docked at the Naval port. This Ship reserved for the President is called “President’s Yacht”.

This year,INS Sumitra became the President's Yacht.INS Sumita is an indigenously built Naval Offshore Patrol Vessel.The yacht, which is to lead the Presidential Column, has the Ashoka Emblem to distinguish it from other ships. It is to fly on its deck, the President’s Standard, also a segregation.

This year’s exhibit showcased 66 submarines and 55 aircrafts from the Navy and Coast Guard along with some merchant ships. The President’s Yacht passed through 44 ships which include a combination of Navy and Coast guard ships, vessels from the Shipping Corporation of India and Ministry of Earth Sciences.The ship's docked are not all of the ships the Navy has to its accode. Only one of each kind was displayed which included all  the latest additions to the Indian Navy.

On the arrangements, Navy said,

“In this most formal of naval ceremonials, each ship dressed in full regalia will salute the President as he passes. The President will also be reviewing the Indian Naval Air Arm in a display of spectacular fly-past by several helicopters and fixed-wing aircraft. In the final stage of the review, a mobile column of warships and submarines will steam past the Presidential Yacht.”

It is the flagship event of the Indian Navy which arranges it with great pride. Though it is not novel to our country, it is a long standing tradition for many navies prominent across the world.

A high post Naval officer has explained its significance as further,

“Historically, a Fleet Review is an assembly of ships at a pre-designated place for the purpose of displaying loyalty and allegiance to the Sovereign and the state. In turn, the Sovereign, by reviewing the ships, reaffirms his faith in the fleet and its ability to defend the nation’s maritime interest, the review was perhaps conceived as a show of naval might. Though it still has the same connotation, assembling warships without any belligerent intentions is now the norm in modern times”.