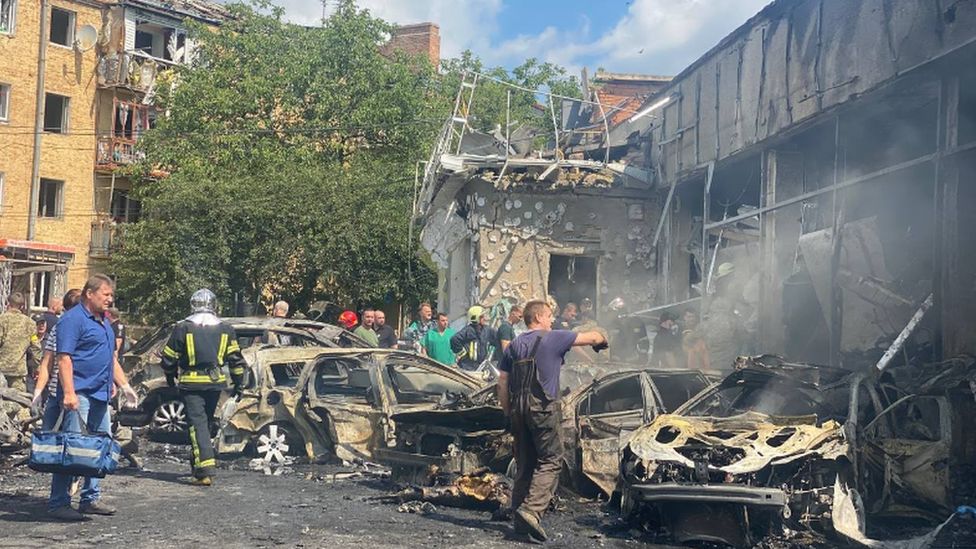 A park outside a central office block after the missiles strike in the city of Vinnytsia. Source: Reuters.

On July 15th, the Ukrainian President, Volodymyr Zelensky, demanded that the international community establish a special tribunal to condemn Russia’s war crimes committed since the beginning of the war in February.

This declaration came after the last deadly attack on the city of Vinnytsia on July 14th that killed at least 23 people and left more than 100 people wounded, including three children. The city is located southwest of the capital city, Kyiv, and far from Donbas.

According to Volodymyr Zelensky, this attack was an explicit act of terrorism.

The President, as reported by Interfax, stated that "This day once again proved that Russia should be officially recognized as a terrorist state. No state in the world poses such a terrorist threat as Russia".

This issue was raised during a conference organized at The Hague on July 14th. The President required the institution of a special tribunal to investigate Russian war crimes in Ukraine since the beginning of the war.

The conference saw the participation of several political, diplomatic, and judicial leaders organized by the International Criminal Court (ICC), the European Commission, and the Netherlands. The meeting aimed to focus attention on Russian crimes and not leave them unpunished.

The first investigation into possible war crimes was initiated in March by the ICC prosecutor, Karim Khan, after receiving the green light from 43 states.

The same Zelensky raised the issue in early April after the deadly attacks in the city of Bucha, where the bodies of 410 civilians had been recovered.

As reported by the Guardian, the Ukrainian President, during a meeting with the UN Security Council on April 5th, stated openly that “The Russians searched for and purposely killed anyone who served our country. They shot and killed women outside their houses. They killed entire families – adults and children – and they tried to burn the bodies”.

This declaration was followed by his condemnation of Russian attacks as crimes of war, drawing a parallel between the Russian attacks in Ukraine and the attacks carried out by the Islamic State in Syria and Iraq. The only difference, stressed the President, is that Russia is a UN Security Council member.

Before the meeting, Liz Throssell, the spokeswoman for the UN human rights office, acknowledged that there is clear evidence that civilians are being targeted and that action must be taken.

So far, more than 40 countries have agreed to cooperate. Among them, are the EU, the US, Canada, Mexico, and Australia. They pledged to offer at least 20 million euros to support the ICC and the prosecutor general’s office in Ukraine.

The attacks on the city of Vinnytsia have not yet been acknowledged by the Russian defense ministry, which also denies targeting civilians in general. Ukraine insists, though, that the strikes have been perpetrated by Russia, as they came from Kalibr cruise missiles released by a Russian U-boat stationed in the Black Sea.

These attacks are drawing even more attention since they were carried out in a city located in the central part of Ukraine, very far away from the epicenter of the war, namely the Donbas region.

It should also be pointed out, though, that Russia, on its part, often accuses Ukraine of attacking its territories to blame Russia.

This was openly stated by the Russian Foreign Minister, Sergey Lavrov, during an interview with the national broadcaster of Belarus aired on June 23rd.

As reported by Tass, the Minister said that "It is of no surprise to me that lies have become the Ukrainian government’s stock-in-trade.”

He also stressed that even Western media acknowledge that Ukraine attacks its territories to blame Russia.

Accordingly, he pointed out that "Recently, he [Zelensky] claimed that reports of Ukrainian troops bombing Donetsk city center and other populated areas were false. However, even the Western media that whitewashes Ukrainian neo-Nazis by all possible means has already admitted that reports blaming Russia for those deeds were false".

In this ambiguous situation, the only thing certain is that the international community needs to shed light on the situation, regardless of where the truth lies.