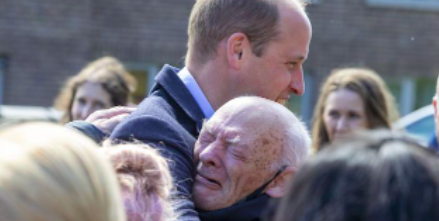 Last week, The Duke of Cambridge and The Duchess of Cambridge visited Scotland for a two-day tour of the country to mark the Queen’s upcoming Platinum Jubilee. While the royal pair were in Glasgow, a local man, William Burns, 66, was captured by photographers after being overcome with emotion following a conversation with the Duke about Scotland’s high level of homelessness. Prince William has been campaigning for the homeless for several years and, in December 2009, spent the night sleeping on the streets in order to understand the horrific conditions the homeless are forced to endure. Therefore, this encounter clearly impacted him emotionally, and in a heartwarming turn of events, the Duke embraced the royal fan in a seldom seen and affectionate display of affection.

While there are no formal codes of conduct when meeting the Queen or a member of the Royal Family, most people opt for a traditional bow or courtesy. The Cambridges, on the other hand, are becoming much more approachable members of the Monarchy by engaging in this unusual emotional display.

Over the years, such displays of affection from the Royals have become increasingly more popular. A pinnacle moment was when Princess Diana publicly challenged the stigma surrounding AIDS and HIV during the mid-’80s, a time when the world was stricken with fear of the diseases. The glove-less Princess reached out and hugged a little boy with HIV, a moment that has since been described as ‘momentous’. Diana’s approachable nature has been shadowed not only by her eldest son, William, but also by her youngest son, Prince Harry, The Duke of Sussex. In 2019, Prince Harry shared a warm embrace with a lady when visiting a community cafe during a visit to Barton Neighbourhood Centre in Oxford.

While the Monarch is attempting to appear more approachable, there have been a few instances where persons have stepped outside of royal decorum. One of which occurred in 2019 when Michelle Obama, the former First Lady, laid her hand across the Queen’s back and committed what she described in her memoir as an “epic faux pas”. Royal protocol requires that no one touch the Queen unless she extends her hand first. However, the former First Lady noted that she and Her Majesty were bonding over both being oppressed by uncomfortable high heels, and the Queen responded in a similarly affectionate fashion and rested her hand on Michelle’s back.