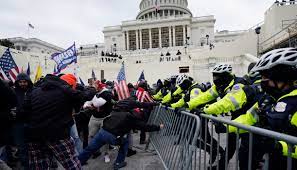 Last Monday, five members of the extremist group Proud Boys were charged with seditious conspiracy in the January 6 Capitol riot.

Among the five is Enrique Tarrio, former Proud Boys leader. Indictments regarding conspiracy in the riot date back to January, when members of another far-right extremist group were charged. Stewart Rhodes, leader of Oath Keepers, and ten other members were indicted with the same charge as Tarrio and the other Proud Boys.

Federal prosecutors argue that the five Proud Boys members conspired to engage in an attack on the U.S. Capitol to stop Congress from certifying president Joseph Biden’s victory. According to prosecutors, the rioters stormed the Capitol, property of the United States, contrary to their authority, to prevent the certification of a president elected through a lawful procedure.

Carmen Hernandez, defense attorney for Proud Boys member Zachary Rehl, argues that because her defendant never used any force, he is not guilty of seditious conspiracy. Tarrio’s attorney argues that there is no evidence of his conspiracy because he was not present at the riot.

Two days before the Capitol riot, Tarrio had been charged with vandalizing a Black Lives Matter banner at a church protest. A local judge had ordered Tarrio to leave Washington, D.C.

The indictment against Tarrio and the other members states that they held meetings and communicated messages to each other to plan the January 6 attack. Prosecutors cited a document Tarrio received before the episode, titled “1776 Returns”. The paper, sent to him by an unknown individual, detailed plans to storm government buildings, prosecutors said.

A video released by the Justice Department shows Tarrio meeting with Stewart Rhodes, Oath Keepers leader, 24 hours before the attack occurred. Few video details have been discussed, but prosecutors reference it as potential evidence of the two groups’ collaboration in the attack.

The five Proud Boys members are scheduled to stand trial in federal court in August.