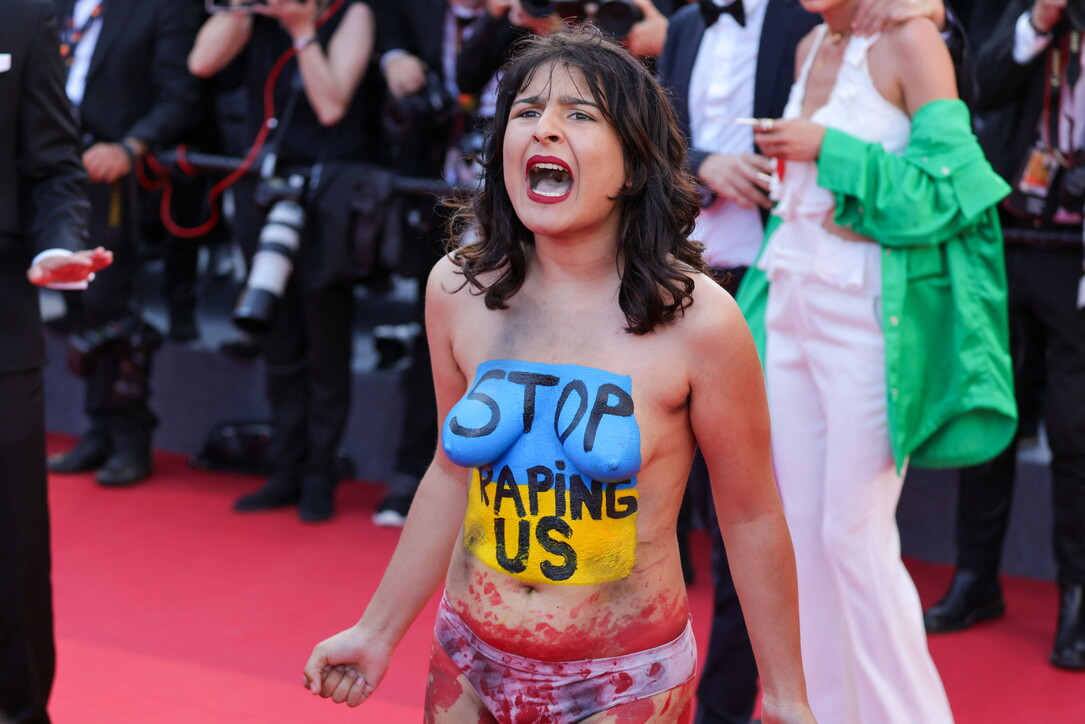 As every year in Cannes in France since 1946, the prestigious Film Festival is held in the Palace of Festivals and Congresses, in which renowned artists are invited to watch the premieres of the films considered the most deserving.

This year, however, something different happened. With the terrible war in Ukraine caused by the Russian Armed forces, which are commanded by the crazy President Putin do not give any sign of stopping attacks on civilians, effectively destroying an entire nation, someone has decided to make themselves heard, to fight even just metaphorically for what is right.

A French activist from the feminist collective has indeed entered the red carpet of George Miller's new film, "Three thousand years of longing", tonight at the Cannes film festival, to protest against sexual violence against women in Ukraine. On her chest and belly, the woman had painted the colors of the Ukrainian flag, yellow and blue, and written: "Stop raping us". On her panties, on the other hand, the red color represents the blood of the victims of the conflict and the pain of the women raped during these last months. The moment lasted a few seconds but the photographers still managed to film the scene, the woman was in fact then stopped during the protest by the police but what matters is the gesture, which once again highlighted the barbarity made by Russian forces in Ukraine.

In fact, there are numerous reports that reach us of Ukrainian women forced to suffer sexual violence, rape, and torture every day. in reality, as reported by the UN, there have been rape and violence also against Ukrainian boys and men aimed at terrorizing them and pushing them not to fight and not to resist. At the moment, testimonies, evidence, and information are being collected and dozens of cases of sexual violence have been analyzed and certified and several investigations have been opened. For example, a young Russian soldier is being investigated by the Kyiv Regional Prosecutor for two gang rapes in the Brovary district in March, during the occupation.

The French activist group SCUM, born as a radical feminist manifesto in the 1960s, then published an explanatory post on Twitter claiming what happened on the red carpet. This is another of the many gestures and speeches that were held on these days of the Cannes 2022 Festival.

Among the many, we remember the screening of the posthumous documentary on Mariupol by Mantas Kvedaravicius, the connection during the opening night with the Ukrainian president Volodomyr Zelensky, and the phrase uttered by Thierry Fremaux (director of the Institut Lumière and of the Cannes Film Festival) “Everyone is welcome here in Cannes, apart from Putin”.

Sexual violence regardless of who the victim is is a horrible, deplorable and monstrous act and anyone who is guilty deserves to be handled on trial and severely punished. We all deserve to be respected and no one deserves to be treated like a sex object.