Protests rage across the U.S. as Roe v. Wade is overturned 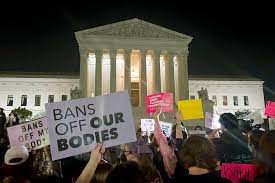 Initially instated in 1973, the court ruled Roe v. Wade had the purpose of protecting a woman’s right to an abortion. However, on Friday, June 24, the Supreme Court overturned it and abolished the constitutional right to receive an abortion in the United States. This means that states have full authority to determine if an abortion is legal.

Expectedly, both rage and celebration were seen today and yesterday across the country, as pro-choice protestors and anti-abortion commemorators flooded the streets in mass numbers.

"It's a betrayal against women ... it's a giant step backwards ... It opens the door for other rights and freedoms to be threatened," says Natasha Mitchell, a pro-choice protestor interviewed by CNN in Denver. In Eugene, Oregon, over 10 arrests were made during protests on Friday night, as protestors gathered outside a medical building and ended up blocking entrances and roadways. In Phoenix, Arizona, supporters of abortion were hit by tear gas by Phoenix police as they were reportedly seen pounding on the doors of the Senate building.

As this milestone decision has been revoked, many voiced their concerns about the Supreme Court not stopping here. After the ruling, Supreme Court judge Clarence Thomas stated the legalization of gay marriage should be reconsidered. Concerns about LGBTQIA+ rights and perhaps even more women’s rights being revoked have skyrocketed in the last two days.

Despite over 70% of the United States population supporting Roe v. Wade, anti-abortion won last Friday. It brings into question the legitimacy and the fairness of the current justice system, as judges have become more politicized and less bipartisan.

Oath And Bell Ceremony: Meloni’s Government is Ready To Go