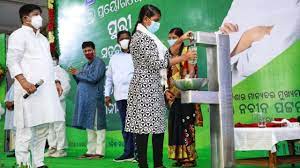 In recent News, Puri has become the 1st Indian city to have 24 – hour quality tap water facility. The city of Puri has thus achieved this historic achievement under the Sujal Scheme. The Mission ‘Drink from Tap’ was launched under this scheme by the Chief Minister of Odisha, Naveen Patnaik who aims to provide quality drinking water to urban areas in the state.

The Scheme has been launched a year after the Swajal Scheme was launched for the entire nation by India’s Prime Minister, Narendra Modi. The Mission ‘Drink from Tap’ is also visioned to reduce garbage including plastic and other used materials in the sewers alongside providing quality drinking water.

The Town of Puri with an estimated population of 2.5 Lakh citizens was chosen for the Mission Drink from Tap launched in 2019 alongside Bhubaneswar as the center for Pilot Projects through WATCO (Water Corporation of Odisha). Puri was chosen to be the 1st city due to its amazing Tourist infrastructure. It also has great publicity value and potential to draw more tourists due to its location and magnificence. The city of Puri is said to attract more than 2 crore tourists every year to the world-famous Jagannath Temple. Apart from the famous Temple, the beaches of Puri also add on to its magnificence and popularity as a Tourist Hub.

The Sujal program is also said to be patterned in a similar way to Prime Minister Narendra Modi’s Swajal scheme directed as a pilot project for the Indian States. The Swajal Project intended to create a demand-driven program involving the community to provide a sustainable viewpoint of access in rural areas to provide quality and hygienic water. This scheme also had the vision to empower communities to build, plan and design every village with the task of monitoring and implementing the designs. Along with these, community ownership for operations and maintenance for women-led teams were also envisioned.

While the Swajal Scheme aims to enhance access to safe drinking water to people in rural areas building upon sustainability, The Sujal scheme caters to the urban areas only. The total revenue target is said to be 250 Crores Per annum and thus there is a plan to expand this scheme to other cities to reach at least 12 Lakh Urban residents. As a means to empower women, all the collection in these meter readings would be done by the Jal Sathis (women volunteers).

The ideation for obtaining paid water through metered pipes has been planned to ensure the accessibility of safe water as and when needed and bill those beyond a certain amount of usage which would help prevent wastage of water. While the mission is supposed to cover 10 other cities and is mandated to be upscaled, some problems fall on the implementation of these schemes to a larger extent. It has been said that providing subsidies to the poor section of the society would be a problem and would depend on whether the state or central government takes it under their ambit. The Project will also take months to get flowing with the estimated output which would demand many resources.

The exact sum of the project has not been made public yet. In addition, the state gets help from centrally sponsored schemes that support water supply in urban areas, like the Jawaharlal Nehru National Urban Renewal Mission (JNNURM) 2, which was launched in 2005, and, more recently, the Atal Mission for Rejuvenation and Urban Transformation (AMRUT) which aim to work on providing water supply to all people.

The officials have also helped clear all confusions of the citizens by explaining in a detailed way about the operational logistics of the supply of water and how there is no fear of contamination from the reservoir to the households through pipelines or in the storage tanks on the roofs of the houses.

Another Big takeaway that this Mission aims to do is the Reduction of Plastic Waste. This move will aim to reduce the burden of Tourists needing to carry water bottles to all places and hence minimalize the use of plastic waste. This Mission will ultimately aim to supply water 24 hours a day, 7 days a week, each day of the year and will extend its support further to provide a viewpoint at addressing the protection of water sources, water treatment, and the prevention of recontamination in the transmission and distribution throughout pipelines.

These schemes have been divided into aspects of equitability, sustainability, and people-centric features that would facilitate adoption. The Three Basic Highlights of this mission are said to be the first to provide 24X7 quality tap water to every household in urban Odisha without any contamination directly that would prevent the fall of diseases and ensure a clean supply.

The Second would be to terminate household investments in overhead water tank/ underground reservoirs, motor pumps, and RO-based water filters. These usually involve personal finances and its operations are very interlinked to the local supply which creates hindrances. The third is said to have 100 % metering of household water connections to reduce non-revenue water (NRW), which has also been highly praised as an innovative idea.