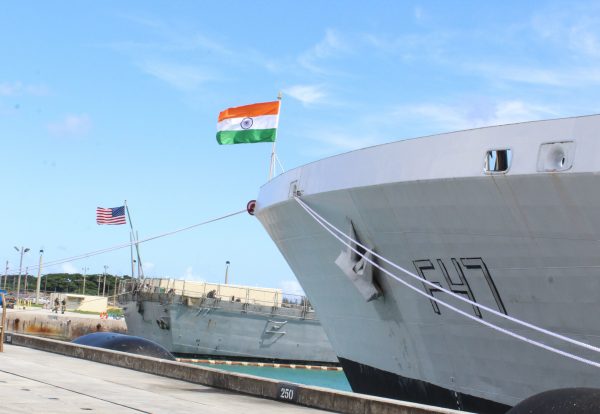 On November 5, 2022, the four nations that make up the Quadrilateral (Quad) grouping—India, Australia, Japan, and the United States—met in Japan to discuss "further strengthening inter-operability" in upcoming Malabar multilateral naval exercises. A Chinese research vessel, the "Yuan Wang-6," entered the Indian Ocean through the Sunda Strait in a related development.

The gathering in Tokyo took place before several multilateral events, including the naval war games, that Japan will host in the coming few weeks. The Malabar exercise, which started as a bilateral exercise between India and the U.S. in 1992, turns 30 years old this year. However the presence of the Chinese ship's course is unknown, and the Indian Navy is closely monitoring its activities. Three months ago, India and Sri Lanka engaged in a contentious diplomatic spat over the docking of a similar vessel at the island nation's Hambantota Port in August.

The Chief of Naval Staff (CNS), Admiral R. Hari Kumar, arrived in Japan earlier that day as part of a formal visit from November 5 to November 9. He will attend the International Fleet Review (IFR) held by the Japan Maritime Self-Defense Force at Yokosuka on November 6 to mark the 70th anniversary of its founding.

The CNS will attend the 18th Western Pacific Naval Symposium (WPNS), which will be hosted by Japan, the current Chair of WPNS, from November 7–8, in Yokohama, as one of the Observer Navies, according to the Navy.

The Indian Navy continued, "The presence of these locally constructed ships at these multi-national events will be an opportunity to display the ship-building skills of Indian shipyards during a significant international gathering. On November 2, Indian Naval Ships Shivalik and Kamorta sailed into Yokosuka to take part in the Malabar and IFR exercises.

According to the Navy, Admiral Kumar will also take part in the opening of the Malabar exercise, which is being held in Yokosuka, and interact with his counterparts and other delegation leaders from close to 30 participating nations in the IFR, WPNS, and the Malabar exercise.

The arrival of Yuan Wang-6 occurs right before an upcoming long-range missile test by India. India has reportedly issued a NOTAM (Notice to Airmen) for a no-fly zone over the Bay of Bengal between November 10 and 11, with a maximum distance of 2,200 km, according to the open source intelligence handle on Twitter @detresfa. Given the test's range, an Agni series intermediate-range ballistic missile is most likely connected.

The Yuan Wang-6 left Jiangyin, China, on October 21. As of the morning of November 4, it was near Indonesia and was sailing southwest, according to the maritime vessel tracking website marinetraffic.com. While research activities are permitted in international waters by international laws, the data produced has a dual nature, including military applications, and frequently, the motivation of Chinese vessels appears dubious.

The Japanese Defense Ministry recently reported that a Chinese survey vessel had entered Japanese territorial seas on November 2 in the early morning hours. This was the fourth invasion into Japanese waters by a People's Liberation Army Navy (PLAN) vessel this year, a record high, according to Takahashi Kosuke with the Janes Defence Weekly's piece in The Diplomat. Chinese naval ships have previously been seen in the area while the Malabar drill was taking place.

Chinese research vessel deployment in the Indian Ocean Region (IOR) has steadily increased. with the general area of deployment being noted to be near the 90-degree east ridge southwest west Indian ridge. Powerful tools are available on research or survey vessels for snooping and obtaining a variety of data. During a speech in September, Admiral Kuhad observed, "At any given time, we have anything between five and eight Chinese Navy units operating in the IOR, be they warships or research vessels. We watch them closely to see how they do their business in the IOR.

How Indian officials are viewing the attack on Imran Khan

Get your vaccination certificate with one tap via WhatsApp